Deer and a request for help

The mesh is already done. The only thing likely to change is some of the coloration and the resolution, which brings me to my request for help.

The reason it is at such a low resolution is this: fur. Each ‘strand’ is counted as roughly 49 faces during rendering. This little picture had 3.9 million faces total. It took almost all of my 1GB RAM to render it.

So, I’m wondering: is there any way to make this a high resolution picture without decreasing the quality of the fur?

Along these lines, is there any way to make it render just pieces of it, without loading any of the rest of the mesh (and overloading the memory), so that I can reassemble it into a complete, higher resolution, picture?

Setting “Xparts” and “Yparts” in the render options is useless, in that it still needs to load everything before it begins to render the pieces, so it still crashes. As is the border. As is putting something in the way of parts of it.

Or, alternately, is there any way to decrease the number of faces per hair? I looked around for a bit, but couldn’t find anything.

as nice as it is, do you need to render it with fur? Or can you fake it with textures? Especially if it is intended to remain in an image form (not animated) There are a lot of hair particles which can be removed (underside, back side, etc). Use the weight painting for live particles.
Other than getting more ram, I’m not sure of a better way. Maybe try rendering from the command line? I’m not sure how many resources this would effectively free up, probably not a noticeable amount.

Well, the whole point of this was to make it with fur. Of course, I could use textures, or UV map a picture of fur, but that totally defeats the purpose. Ah well.

hey… have you experimented with the “step” value for static particles? the higher you set it, the fewer faces your hair strands will have. 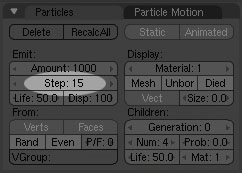 shteeve, I didn’t know that about the step. Good to know I guess.

kuactet - are you going to do your final rendering with internal or yafray?

jack up your render size! it will make the hairs smaller, turn off osa because when you downsize your render pp it acts as OSA would.

Remember, by default a particle is one pixel wide, so if you render 2x as big the hair will be 1/2 as small. 4x as big, 1/4 original size and so on…

I tested out ‘step’ two days ago, it didn’t seem to do anything. I’ll try it with the official release.

It is also possible to set the width of a hair strand; I have it set to 1/2 pixel right now.

If ‘step’ works, I’ll post a larger render in the finished works section. It looks, I imagine, less like a bear.