For the past few months (coming up to 6 now) I have been working on a 6DOF game based on Descent. It was originally planned to be a clone, but it has grown since then, and will be a bit more than that!
The final product will not be sold, it is purely a game for fun, and is free to be distributed, at any stage of completion to anyone. It is using the BGE internal game engine in multi-texture mode. It is designed to run on almost any computer.

While I am good at modeling, and python and the other basic BGE necessaries, there are a few things I have issues on, mainly being Texturing and Level Design and also Concept art.

Recently I started a website for this game.Going there will often tell you more about current progress than this thread, as this thread is just generally for recruiting.

Download Information:
The most recent public release can be found at over at sourceforge.
It is available as blends or as an exe.
Last update was on [12/11/2011]. A new release is planned within the next month.

Who Can Join:
Anyone who can model, texture or anything really. You don’t have to be the best, just willing to have a go.
Having a dropbox account would be good, as that is how I am collaborating the files.

People from other forums, who have any of the above skills

I am happy to work with as many people as who want to join, and you can join either long term or short term, you can be at any stage of learning to use blender. If you have some skill that I have not asked for above, then ask and I will evaluate whether I need it or not (I will probably say yes).

Some video’s and screenies

A little teaser video, to show a bit of what it’s like. I’ll make a more complete gameplay Vid when I have the time.

Just been working on adding in an afterburner. Like descent it has a separate energy bank, that is depleted quickly, but it then recharges from the ships main supply. This means it can only be used in bursts of about 10 seconds or so.
I have not yet added the time limit and energy use, only the motion and the visuals: 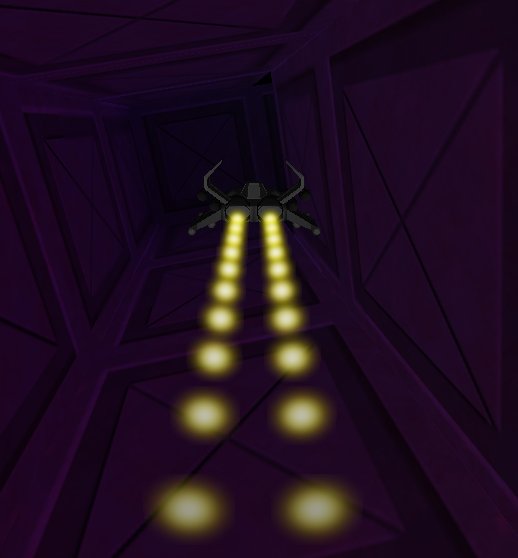 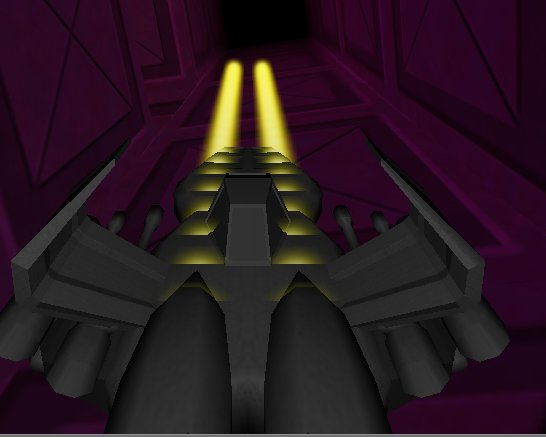 An issue I hadn’t anticipated:
Although the afterburner is faster than the reverse motion, it has less torque, meaning that if you press move backwards at the same time as afterburner you will end up with the above image…

Oh, and using afterburner also makes you bank on the corners, as well as rotating. It looks better.

I’ve re-done the texture job for the players ship, with a baked AO pass, and it is looking way better: 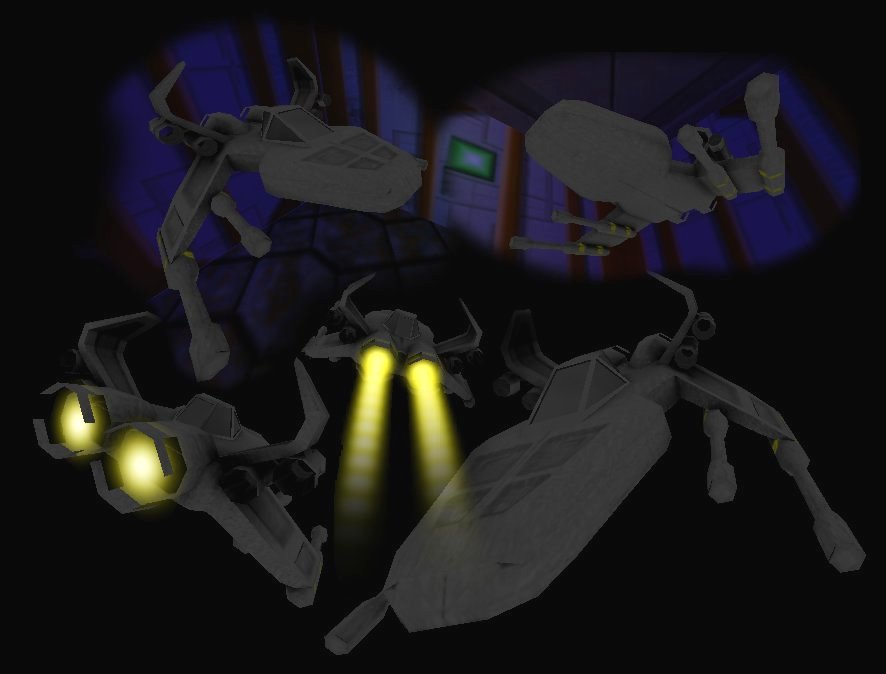 This is a college of screenshots of the real-time models assembled in gimp.
There are still a few areas I need to patch up and fix, but it is looking way better.

I have revised the control setup so that it now doesn’t slide at the start. It also now uses Q and E to bank.

Anyone want to help?

Started a level that actually has a proper design rather than just a cube based maze.

Mesh is done, and texturing is started

Texturing the new level is 90% done. I will probably finish it by Saturday, and upload it then (with some pictures)

Am also working on some new enemy bots. I have two so far, so if anyone here is keen to design some, feel free to.

Can’t wait to see it

I forgot to add in I’m handy with the old video editing as well, It might come in handy.

And a speed painting demo: http://www.youtube.com/watch?v=x-sCHVfuobI&feature=relmfu

Wow, thanks Oki, welcome to the team.
I think you will do marvelously, if anything it seems your skills are superior to mine.

Photoshop:
While I have some texture sheets already for the game, I am lacking some things, like rock textures, and various metals.
The way I have set up textures so far is simple:
A 512x512 image divided into 16 squares (a 4 by 4 grid)
Generally the textures one one sheet are similar, so I have a selection of lights on one etc.

Blender:
I am not looking only for the real pro’s in blender, as I myself am not one, and have only used the program about 2 or 3 years. The only thing you really need to know is the high polygon restrictions.
While the player model is 930 polys everything else must be kept to an absolute minimum.
I’m hoping for no more than about 300 polygons per enemy character. With some this may be impractical, and I accept that, but this is what it would ideally be.
You don’t really need to know the GE at the moment, due to the small size of this project I can probably keep up with adding in the primitive AI to any bots made (they will probably act a similar way, but with different speeds, turning speeds and health).
Enemy bot meshes and textures are probably a priority at the moment.

Video:
BRILLIANT. I needed someone like this. I’m hoping to have some game-play videos sometime.

I can’t guarantee 100% dedication to the project as I do have some freelance work going, that and my family will come first, Just so you know.

I definitely agree with this. To me this game is just a hobby, a project that is occupying my free time (when I have it) So I am not concerned to much about the percentage of your time working on it.

That was a lot of things for one person, and I do not expect you to do it all. Pick what you want to do and do it, there is no rush as things are going slowly at the moment.

Also, what section do you want me to put your name under? 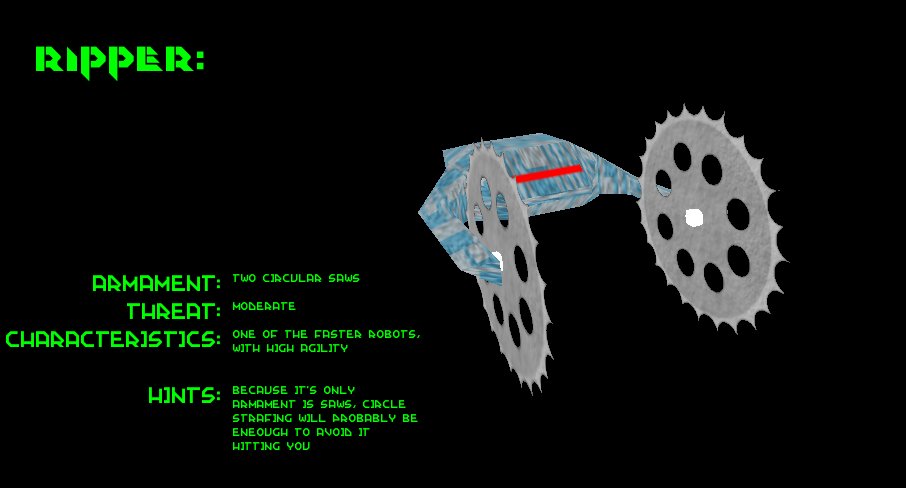 I have just re-uploaded the blend for those who wish to play a newer version.
It can be found at the link at the top or here

I’ll have a go at doing some enemy’s soon. I’m just finishing off some freelance work first. That ripper enemy has no remorse lol, I’d say he needs slowed down some what If he’s that powerful. I like the concept of it though, I could do a redesign on that first if you like?

I got some personal stuff but I can still help you with the logic and python. Just send my a description of what you need. 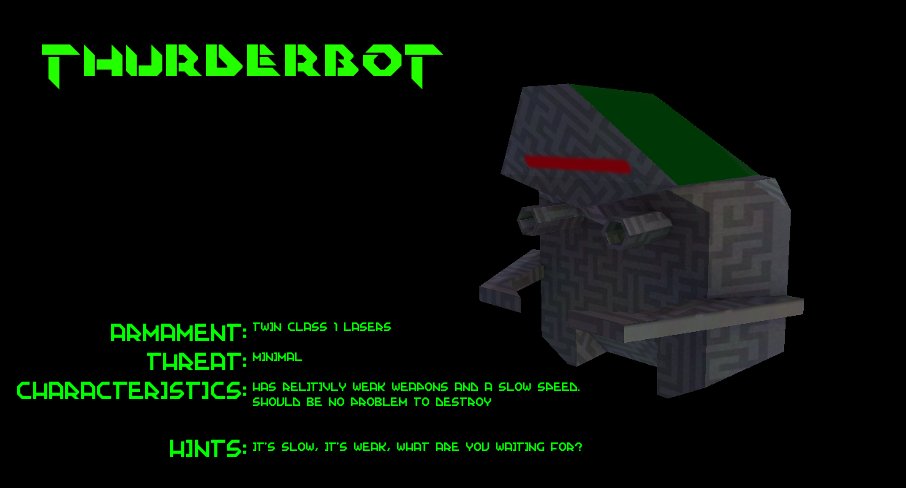 I will only post enemy robots when they are done, so the ones above have logic, guns etc and can kill you…

What’s going to be the best practise to pull these models out of the .blend and texture them? Do you have separate files for them?

What is the situation on sound and music, i can help wit either one.

meatlover:
There are currently no sounds or music. I am not sure whether I want music or not (as it increases file-size hugely) but I definitely want sounds.
Some sounds I would like:
Laser gun fire
Plasma gun fire
Missile launched
Drop marker
A sound to show that an enemy has “seen” you (a few different ones, for each class of robot)
Energy recharge
Power-up collected
Anything else you think appropriate.

Do what you can (if you want) and I’ll appreciate it.

I’ll be working on it, how many classes of robot’s do you have and do you want it to be like an alert klaxon or something different?

Oki:
I have separated the .blend into two blends. Models and Game.

The two blend files are in a single zip that can be found here. Make sure they are in the same directory, or you may have issues.

There are several things you should know:

If multiple people work on the models blend they will submit it to me, and tell me what they’ve changed. I will then keep the changes from both in the next upload of the blend. If two people have worked on the same thing then I may have to chose between them.

Meatlover:
About 6 different activation sounds are enough. And no, they are not klaxons, they are sounds the robots themselves make, so you can decide what sound a robot should make (squeaks/squeals, weapon spooling up etc)