Ok so I wanna try using blender to do some artsie molecular modeling. I know they make other programs that do this and are more specialized, but I’d rather not buy corporate level software for from a hioty-toity, monopolizing, software developer that works on comission for Merck…w/e. Beside blender’s so much more flexible.

So my question is, how do assing two different meta spheres different material datablocks? Mathematically this is pretty basic (meshing two differently colored meta objects). The first attached thumbnail shows an image I pulled from a Wikipedia artical on meta objects. It was generated in Bryce, which we all know is grossly inferior.

So if Bryce can do it, blender can. :yes: 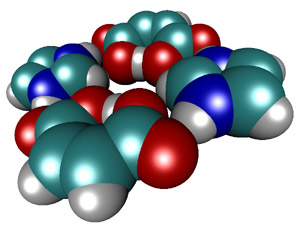