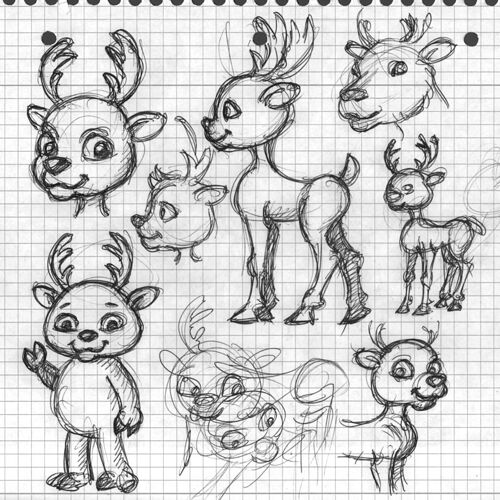 Got myself a Surface Pro to get back into drawing, this Ceratosaurus pair is the first experiment 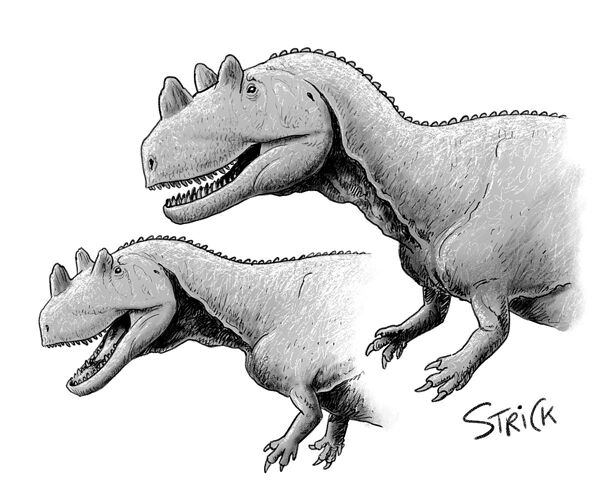 Nice work DinoReplicas I would love to see some Full scenes with them and landscape telling a story in a single image.

Thanks, I’m planning a dinosaur mural for my Grandson’s bedroom wall, the ceratosauruses are a practice for that. These are the measurements I took, the mural is going in the pale blue area. roughs and early concepts for the mural 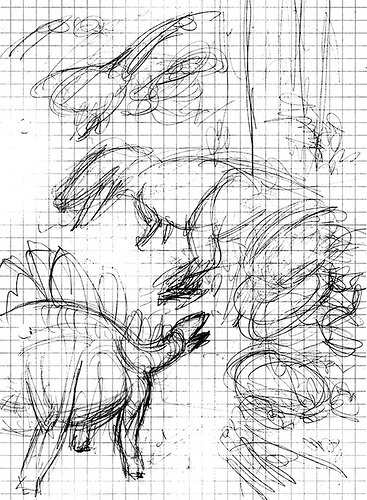 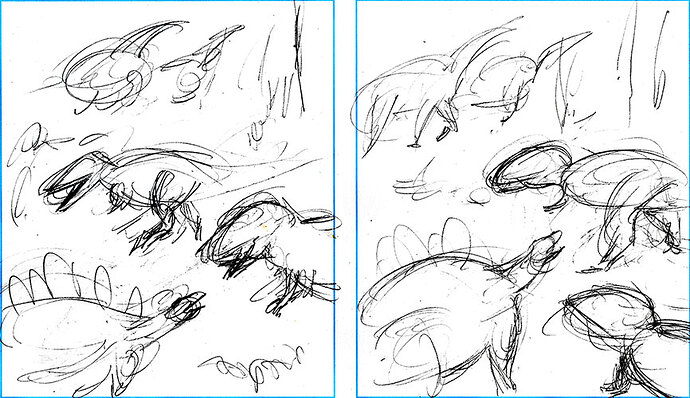 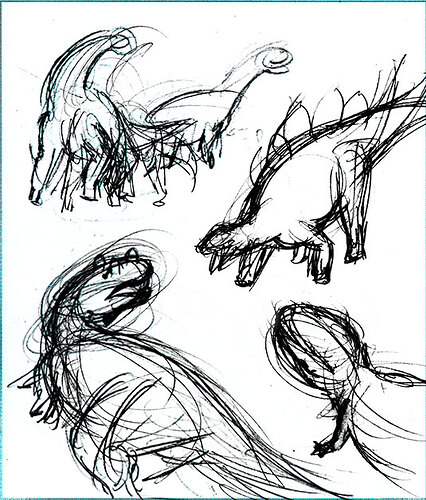 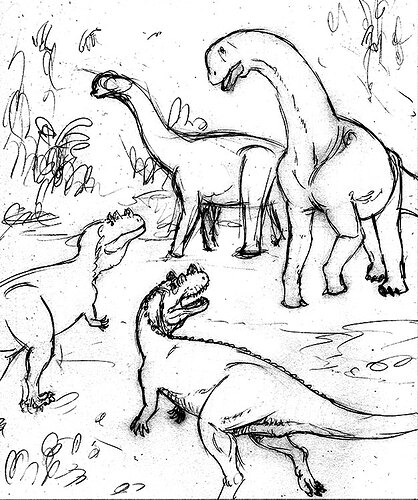 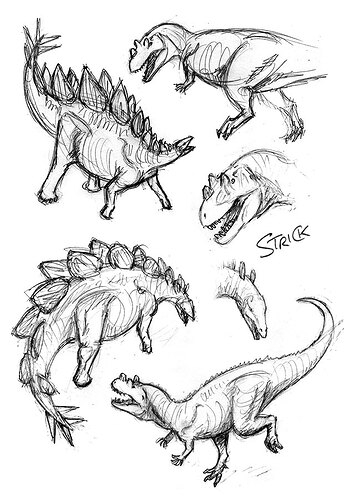 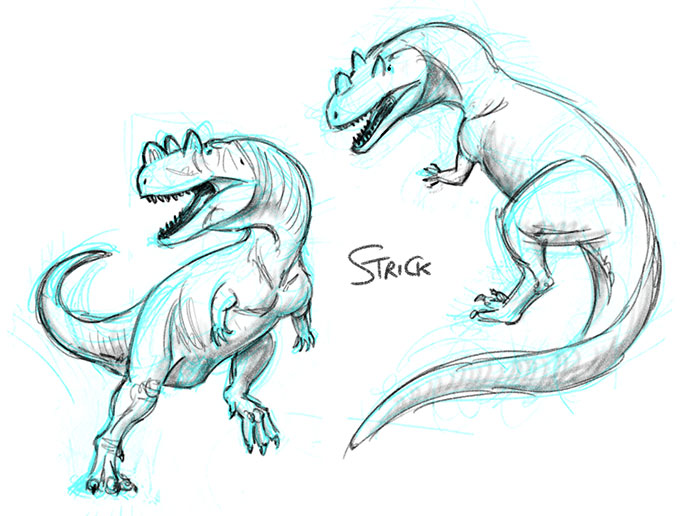 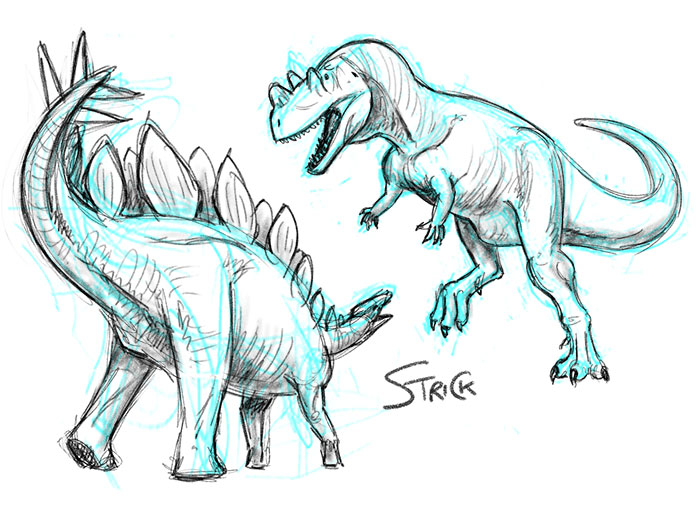 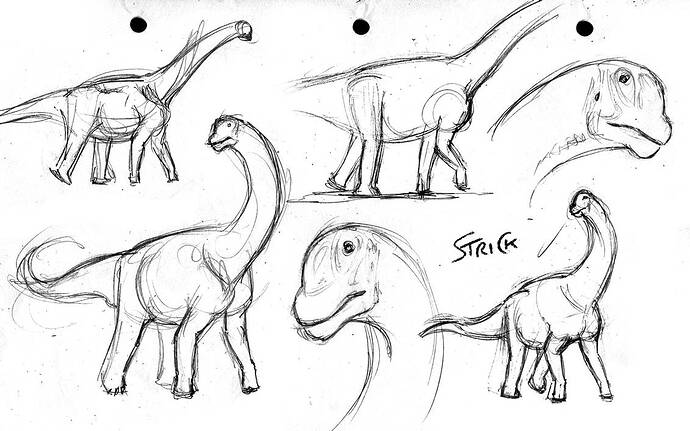 Rough layout for mural, not the most elegant of compositions but probably OK for a bedroom mural for two boys under 6. My aim was to get the dinos nice and big in the frame at the expense of environment. 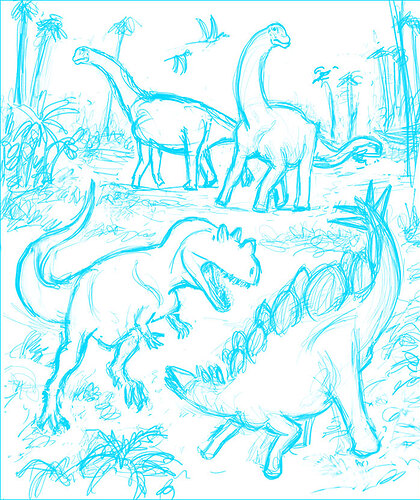 Might be worth going back to the older design with the stegosaurus in the middle and the ceratosaurus at the bottom, It had better layering from foreground to background, I’ll see how it goes.

Well the lads liked the scene so I’m not going any further with alternative designs.

Refined the drawings a bit, I’ve started blocking in a colour rough already, kind of bright and sunny. I’ll push to finish over weekend. 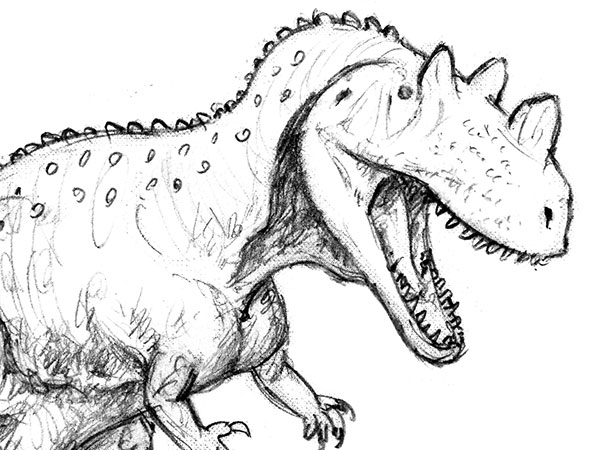 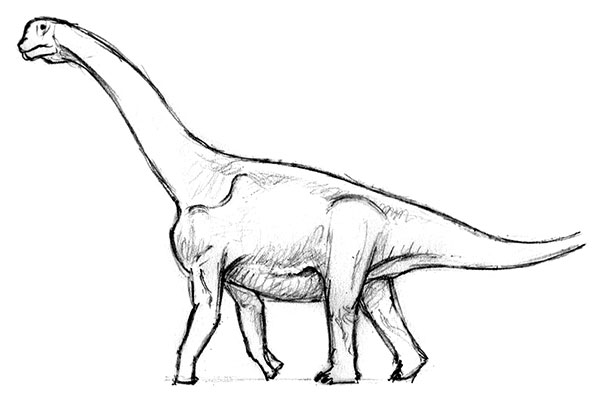 Up till 5am fiddling with this. After discussing colour preferences with grandson No 1, the study came out like this. 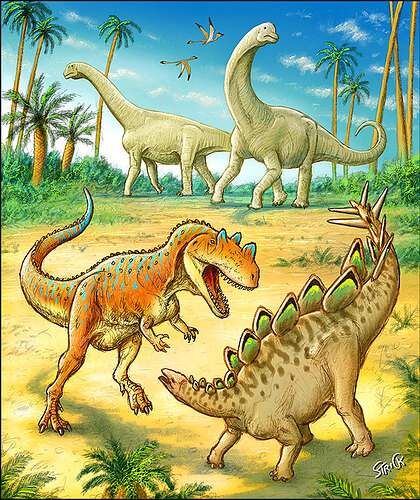 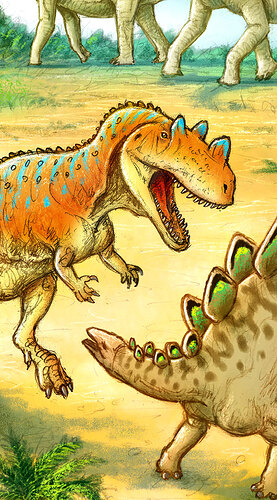 Had another look after a sleep, I think I need to fix the posture of the front sauropod. In trying to make the pose more ‘dynamic’ I put a little too much bend in the forelimbs. I’ll adjust it when I’m putting it on the wall but I might fix the digital file as well at some point.

I like it and I agree the legs may have a little to much bend. Still Better I think to take it a little to far in the Dynamic pose then not enough. I have a Tendency to not take it even close to enough. Still looking good.

Not doing arty things for for the past few days, last night I scratched down an idea that had been bouncing round in my skull. Not done for the mural but clearly I still haven’t got Camarasaurus out of my system yet

. Back to real pencil and paper for this one, where would I be without my A4 scanner! 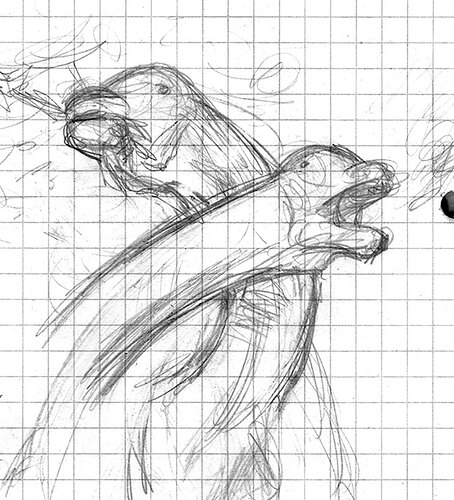 Still having a go at this, nearly finished some more detailed penciling traced over this rough. Some prep drawings for Camarasaurus pair. Not bothering with a final layout, just going to put the elements together and see what happens. 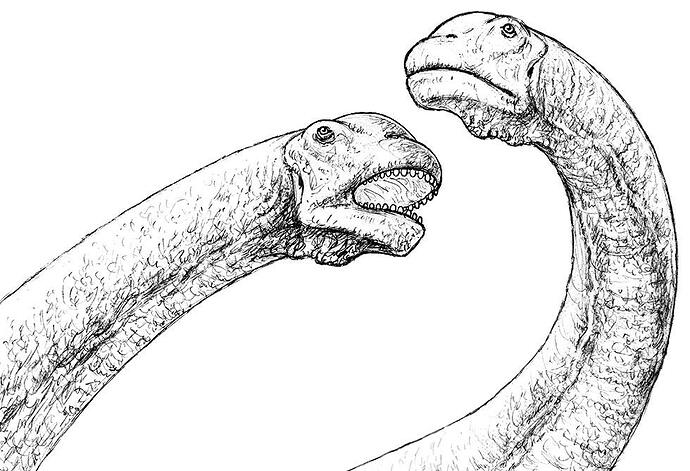 Some quick conifer branches, probably shuffle these around a bit until they’re in a reasonable position. 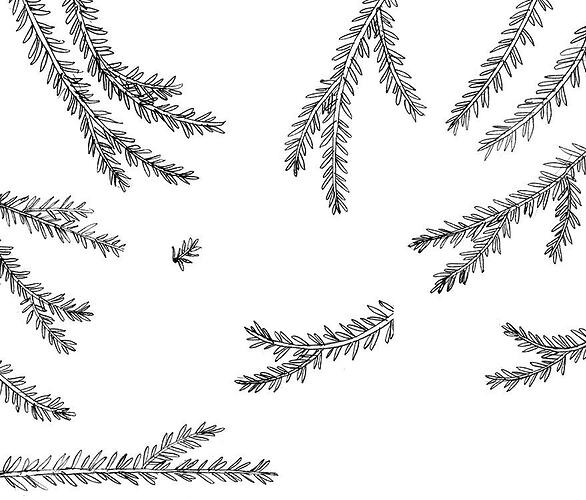 Colouring up eats more time than a hungry sauropd eats conifer needles. Once I start I find it hard to stop until it’s finished, I look at the clock and suddenly it’s 3.30 am . Nice work I like and I like how you gave the bounce light. I tend to forget to include that.

Thought I’d try a wide crop of the Camaras. Mural update: modified the foremost sauropod on the mural image, it had been bugging me for a while so I replaced it with a new drawing. An improved head and more plausible forelimb pose. The head is a little on the large side (trying dramatic perspective like I did for the cerato) but I’ll scale it down a bit when I put in on the wall. 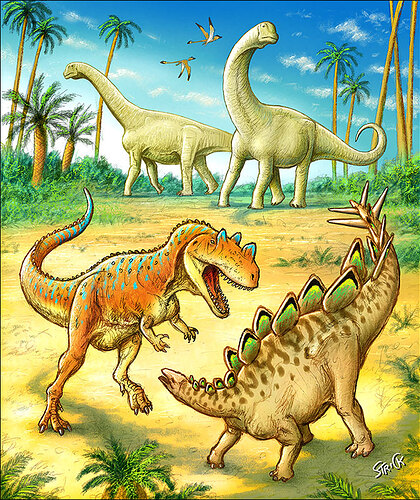 Managed to make a start on the mural.
Drawing made with watercolour pencils (washes off easily). Grid lines 250 mm apart. 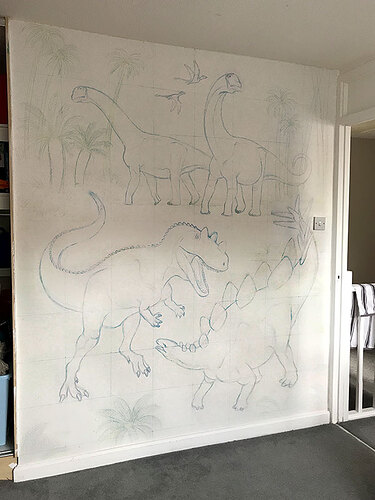 Line drawing over the pencil lines painted with Burnt Umber acrylic, the idea is this ‘under-painting’ will show through as I’m applying colour. 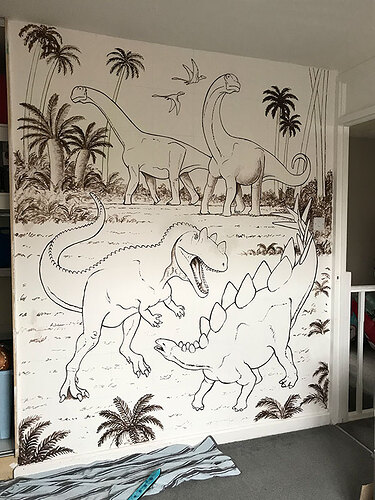 Working in some background colour. I don’t have a smartphone or camera so my daughter is emailing me a photo every 2-3 days. We’re taking the pics from approximately the same position so I’m hoping to make some sort of timelapse GIF animation when it’s done. 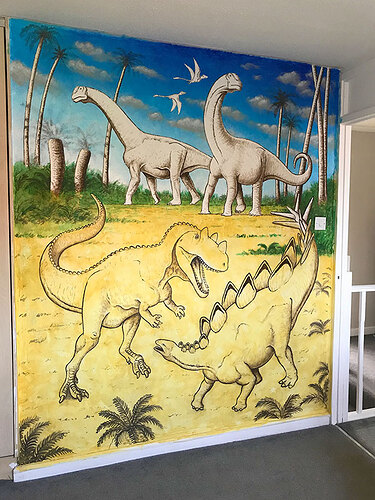 Haven’t spent enough time at the mural these past few days but still making progress. 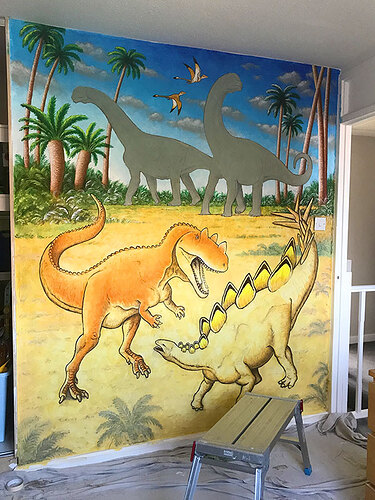