Does anyone know where I can find some reference pics (like side veiws/top views) of dinosaurs? specifically a t-rex?

I’ve googled trex profiles, trex skeletons, trex skulls, trex cross sections. I haven’t hit on anything unless I woefully blind and missed it.

Any help would be appreciated.

Dinosaur blueprints?! Ahem, I don’t think the people who designed them left any blueprints…must be a copyright issue of theirs…

Seriously now, I can’t think of any sites that offer dinosaur skeleton prints in detail and top/side views.

i question weather scientists have it all right

Watching the discovery chanel, and they show them as red and purple and green… How the heck do they know what color something was from the bones?

if you find any info, please come back and share with us, I want to model a nice dino someday too

Not sure if it’s what you’re after but this site is pretty good, has quite a lot of illustrations/photos :
http://www.dinodata.net/
I would really have expected there to be some mad dino artist fan crazy enough to illustrate all ~300 known dinosaur genera (at least sillohuettes for size comparision), but annoying there isn’t. None that I can find at least. There should be. You’re probably better off looking for a good book. “The Ultimate Dinosaur Book” by David Lambert is very good, has some nice side view pictures. Also try Wikipedia.

Dinodata is an excellent site, another one is skeletaldrawing.com
There’s also the dinosauricon which has artists reconstructions.

I think it’s best to start from scratch with the skeleton. There’s very few skin impressions from dinosaurs, and most had pebbly scales. A lot of theropods probably also had feathers, but in most cases we don’t know how long or what shape. All of these things, including of course colour are up to speculation, so you can change these things around a bit and have a certain amount of leaway in making your dinosaur distinctive while still being as accurate as it is possible to be.

Here’s another site I like that has many photos of skeletons:dinocasts.com, beware though, some of the sculpted skeletons are not that accurate as they appear at first to be.

Wow. And I thought I was pretty good at googling.

Thanks alot guys this should help alot.

I love this community!

I read your original post that you are looking specifically for T.rex reference. A good source for that is The black hills institute. They’ve dug up some of the best specimens ever found, including Sue, the largest and most complete ever found. Here’s their T.rex page, it has good quality photographs of some of the different specimens at different angles.

Here’s Sue’s page at the Field museum. Most of the T.rex cg models I have seen simply take the lazy route and copy the Jurassic Park T.rex, which was never supposed to be 100% accurate. If you want an example of a more accurate accurate T.rex, without the exadurated brow horns of JP, this one is good:

Ahh, yes. Sue is the very reason I’m considering making a t-rex! I just saw her in person at the Field museum in Chicago! I went there with my Quiz Bowl team for the national tournament.(we were the state champs).

Thanks for the links. Now I want to make dinosaurs.

heres a few i googled… 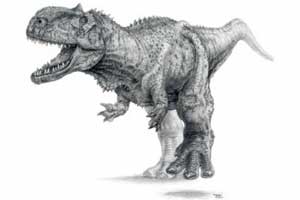 What a coincidence this popped up, I’ve been thinking of programming a dino-related game in Panda 3D. Nice links!