Hi all, brand new to Blender; seemed like a cool tool for playing around with ideas. I have an interest in music, acoustics… physics in general, astronomy and similar topics

I wanted to experiment, trying and animate different magnetic fields. When I saw Blender offered different force fields that could be applied and manipulated, I got pretty excited.

So far I’ve only managed one particle animation that captures what I have in mind: a dipole magnetic field causing particles to rotate in a toroidal pattern. I was able to achieve this by setting up two negatively charged magnetic fields in the same orientation along the z-axis, and with a particle emitter between them.

I’d love to show you a video of the animation, but, err, not sure where to host the video for you all. Suggestions? Is YouTube my only option or are there some temporary video hosting sites that could work too? For now, here’s a still: 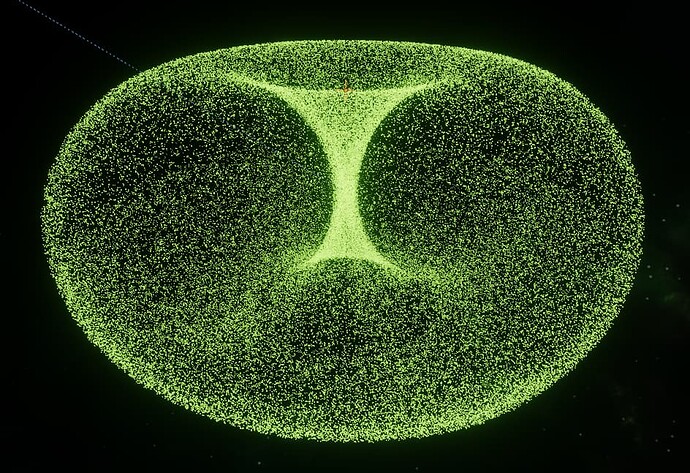 It’s been super fun immersing myself in tutorials each step of the way and reading up about how the force fields in Blender work… but now I’m pretty stuck.

Now I want to create quadrupole and octupole fields. This is a challenge I haven’t been able to overcome. Essentially what needs to happen here is that particles converge at a spherical centre and jump out at four or eight points respectively. It’s pretty hard to explain and I can’t find reference images as a guide. I imagine the particles closer to the centre forming dense and narrow streams and, as they reach the circumference, those streams spread open in all directions and fall down to the other neighbouring points. Maybe you could liken it to architectural vaulting found in cathedrals, except it’s transposed onto a spherical topology.

Maybe I just need to go to sleep and start on a different project tomorrow.

Am I aiming for something that’s simply impossible? If so, can I fake it? If not, can any of you pros pass on your wisdom?

Many thanks in advance for your thoughts. I’m sure many of you will be asking for some clarifications, so fire away. Would love to see if you can recreate what I’ve described, and learn how to achieve it.