I’ve been working with blender for about 4-5 months now(but am a slower learner). I’ve been mainly focusing on modeling, but would like to try and make a game with an idea i have
I would like to make this game much like a zelda style. I have made many models to date and am making more.

The story goes something like this so far: you have a dream about a black creature and yourself in a sword fight. You start to lose and the creature tries to stab you, then you wake up. You then find out that 1 of your friends has been missing for several days after they went looking for something. You go to investigate and find a small temple/dungeon sorta thing so you go into it and find a sword and shield after you fight a mini-boss. A strange sludge then engulfs the building and several others, so you then have to destroy it. The sludge then sucks you into it and makes a copy of you which is going to be the final boss(similar to metroid fusion).

What I Need:
-a scripter
-modellers
-designers
-animators
-texture artist

I plan to do all/most of the models before animating or anything else. I would put up some of the art i’ve done but i don’t have any way of scanning it onto my computer. I have attempted texturing, but all my textures turn out muddy

It’s not like i’m saying please make a game for me, I want to be completely involved in this. this is my first major game so far and am just going to make it short. Maybe just the first dungeon and if the team working on it feels like it could keep going, great. If you feel like you want to help, but don’t want to be a part of the team: then just do what you can. i only have one person that said he might want to be part of the team. i go to school with him in ontario.

If you can help in any way, please post. My email is[email protected]

some models:
a dragon

a bow and arrow

Alright here’s a screen setup concept. It is similair to Zelda for N64.

A cartoon version of our main character:

One of the swords:

Just a render. He is not going to end up wearing these colours:

And lastly the awesome bike you can drive around killing enemies:

another sword and shield

an slightly edited version of a charcter created by kernel_script—i’m going to work on it some more to make it more of my own. epecially re-doing the hair as that will change it a lot

i’ll send you a copy of the full script via email.

Sounds cool, but it doesn’t sound like a game that would be made in the Blender Game Engine. Anyway sounds interesting and dont let me stop you.
Good luck.

If I understand this correctly, you need game engine and python people. How complicated will the gameplay be? I am thinking about helping, but I want more info before I decide. I only do the game engine, no python.

I like that you got a fair amount of models up. Only one thing, the “dragon” looks like a bird. Give it another pair of legs.

PS. I am a fan of the Zelda series, specifically the old ones on N64 (which I fortunately have).

PSS. If I did help, I would be a contributer, not a team member.

If I understand this correctly, you need game engine and python people. How complicated will the gameplay be? I am thinking about helping, but I want more info before I decide. I only do the game engine, no python.

I like that you got a fair amount of models up. Only one thing, the “dragon” looks like a bird. Give it another pair of legs.

PS. I am a fan of the Zelda series, specifically the old ones on N64 (which I fortunately have).

PSS. If I did help, I would be a contributer, not a team member.

Hey man any contribution would be appriciated!

I specifically love to do logic bricks because I have a somewhat lower skill level for python compared to others here on BA.

But we will be working on gameplay, through trial and error, tweaking and testing so on and so forth.

But right now we are still working on basic game design, and mostly models. Once we have most models, we will be prototyping the first gameplay controls and test the “feel” of the game. Make corrections…ect.

Still anyone wants it would be much appriciated.

EDIT: Hey zeflis I’m going to set up a text document with our milestones that we need to complete until going onto the next part of the game creation process.

@coonerboy: Don’t worry, your not stopping us

We have to challenge ourselves with the BGE at some point.

I have made up my mind. I will be a contributor. I shall undertake this project as well as Lori’s Tear (see signature). I love working with logicbricks.

I will PM you my e-mail.

yes, i would like to get almost all models done first. the game will be in 3rd person(just to put that out there)

@Bigfoot: sure, you don’t have to be a part of the team neccessarily, but thanks for contributing

@zelfis: I have only basic texturing skills. but I will not do it because I am not good at it and my graphic card doesn’t support GLSL. I am only willing to help with GE for this. I am also learning python, but I probably won’t be much use, if any, in it.

@Bigfoot: alright sounds good. when we start to approach that part of the creation process i’ll give ya a holler. or you can track with this thread and keep an eye on what’s happening

PM me, or rather e-mail me.

Just a few renders I did. It has the character with some stuff on…the sun goggles, headset, and a sword. He is about to pwn a mutant spider. 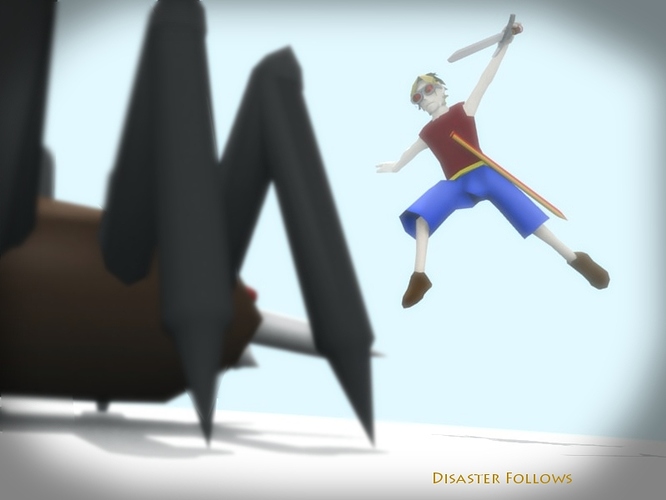 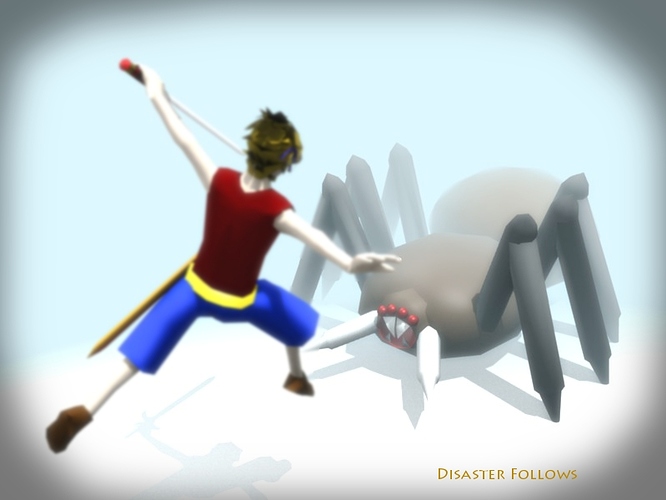 Okay…not the most constructive critisism. How exactly?

looks awsome but yes pose could use some work.

Zootanore, if you can send me the file for that i’ll see if i can tweak it a bit.
or i could just do it myself. i think the colours are a little off from what i imagined but they still look sweet

Okay…hes jumping in the air with a sword…don’t understand please explain what needs work.
I sent you the file for you to modify.

By the way @bigfoot
Just wondering if you would be able to model and/or texture…because we got the game logic covered. Correct me if I’m wrong though, zeflis.

the sword is in the wrong hand- if the sheathe is on the left, you pull it out with the right.
the right arm should be blocking as if he had a shield up if the left hand has the sword
his head should be more titled down

yea the game logic should be able to be handled by zootanore but “2 heads are better than 1”. So if we have the bigfoot doing game logic aswell, he might be able to find errors that you might not see. Plus, if he’s also here we might be able to do some more things in terms of gameplay. But either way, any modeling or texturing would be good. If you don’t feel like it Bigfoot, i’m not making you.

Alright I kind of see your point in the pose.

But I still would work better with the logic alone. Its a lot easier instead of sending the blend and have him workin on another part of it. And you cant really have error’s in logic. If there is an “error”, then the game won’t work. And it’s better for the person who put the game logic together to find and correct that error. How could he find the errors out of my game logic. I could do it much faster.

I would rather do it myself but it’s still up to you zeflis I guess.