I decided today to improve my previous AK-47 model with better textures and a better scene. The model was created in Blender (suprise suprise) and post-production done in Photoshop CS3. This is my first attempt at Photorealism and the model is one of the first that I made, so any C&C is welcome.

UPDATE: Based on comments I have updated the image with a slimmer cartridge and have also added a side view. 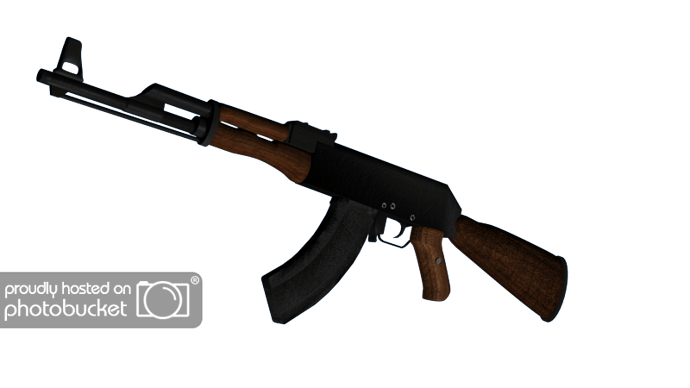 looks good …but the mag looks way too thick.

Hmm, it shouldn’t be. I modelled it on the real thing, but it’s possible that I made a mistake. Thanks very much

improve the lighting some. its too dark

GE-FORCE and Alpha Red: My bad, you’re both right. I have updated the first post with a slimmer cartridge.

I know it is quite dark but I don’t think I will change that as it was the look I was going for.

I have also added a shot of the gun by itself in order to show the whole thing. I’m aware it doesn’t look great texture-wise from this angle but I did it fairly quickly.

Any more C&C would be great.

My only crit is that the stock and grip look just sort of stuck on the receiver. And the photo below shows a round dial on the left side above and behind the trigger, maybe the fire selector? Here’s the link:

If you’re going for photoreal, you need to put in some more work. First, the weapon itself isn’t right. There’s a lot of geometry missing on the left side. Where do the rails go? Get a good reference shot or two.

My other gripe is that you posted in Finished Works and specifically asked for C&C. Isn’t that what “Works In Progress” is for? I know that lots of people end up GETTING C&C in this one, but you’re, like, asking for it.

I’m calling the first shot finished as it’s the best image I have created so far.

klaatuteela: Thanks for pointing that out, I think I may have modelled it on a bad replica that didn’t have that part. I may return to it to improve it, but I think I’ll move on for now.

harkyman: See above for the reason for lack of detail. I meant more in terms of texturing in the first shot, which is the best I’ve managed in the few months since I started 3D. Also, as you said people give C&C anyway, so I don’t see much harm in it. I’m calling the image as a whole completed, but if I can ask people for criticism that’ll help me improve, then what’s the problem? -.-

Where do the rails go?

One other problem I see mainly is that the reciever itself is attached to the main body which is wrong and you can see how it seperates from the body in this pic (http://www.pixagogo.com/Photos/Albums/Photo.aspx?id=S45Q8JtaqZTEXEwfxzT0LJE0DpXU73hLqlmp0Kcj154s5sAHuFLOT9eN12SsdnbVnc)
Also your ironsights are badly done and the grip is shaped incorrectly (refer to pic above for proper grip).
But overall, a nice try at an AK-47.

AR: Sorry. Wrong terminology on my part. I meant to ask: Where are the mount points onto which you might place a rail, such as exist on the gun that I myself own?

Ya I know, there is the side mounting area (http://www.u-t-g.com/zen/images/manufacturers/mnt-973-a.jpg) and you can also replace the foregrip with a tri-rail system.