haven’t had as much Blender time as i’d like lately, but here’s one i’ve cooked up. i call it Distance. 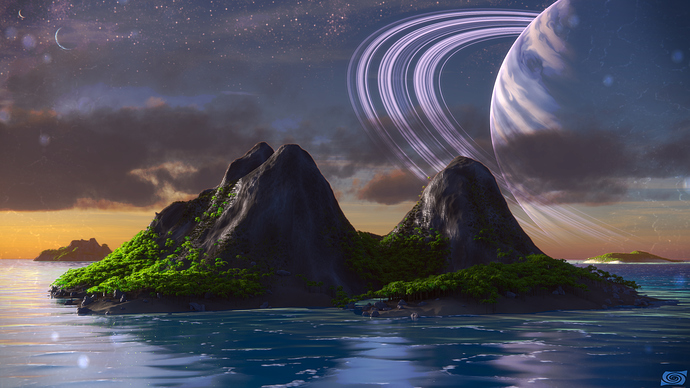 i seem to be having a horrible time with fireflies around the base of the island. i don’t have Clamp set, but i do have Filter Glossy up to .15. any pointers or overall critiques are definitely welcome.

100+ views, no responses. any pointers on cleaning up the fireflies?

For the fireflies you can try to change the clamp value below 1; 0,9 can help to remove a lot of them.
About the image: the scale of the waves is really big compared to the island, the planet on the background is taking more attention than it need if your focus is on the island and the texture on the mountain seems like a little low res…other than that i like the contrast of the colours

where did you get the texture for the planet in the background? It almost looks real.

@mik1190 - thanks for the tip and the critiques! i’ll give the Clamp function a try. i will also try to scale down the wave size, and fade the planet into the sky a bit more so that it’s not drawing the eye. the island is made up of three textures, a “beach” texture, a “dirt” texture and a “stone” texture. i think the texture you’re looking at is the the “stone” texture, which i am thinking about breaking up some by adding some more layers, variations in color, etc. i also plan to do that to the beach texture. if that’s not the texture you’re referring to, let me know.

@eagleflyer - i’ll take that as a compliment.

i painted the texture (as i do all my planet textures, except for planets in our Solar System) in Photoshop.

@gregzaal - i wouldn’t say i’m begging for attention. i am begging for criticism so that i can become a better artist. and i thank you for the criticism and the links! i’ll tone the saturation down on the trees, and will try to pack some more detail into the ocean. i’m struggling a bit with finding a good balance between the number of tiles in the x and y direction and the overall spacial size, without making the waves too large.

I actually like it a lot, repeat the waves too large comment, but I like the style. I like the clouds too;) I have threads that disappear into oblivion with hardly a comment all the time. I realized a while back the crickets are a response (albeit one you don’t want)… so I go back and try again. At some point you reach a plateau where your cg is good enough, but your subject isn’t… man that’s a tough one to fix. I guess I got to read a few books on your target audience, for instance on my blog I hardly get a comment, but post something with clone soldiers in it and wow, tons… go figure.

Nice work,and I think you could reduce the transparency of the planet in the background.

cool, thanks for all the critiques. here’s an update image, where i’ve added more texture to the sand and rock, tried to break up and scale the waves down, desaturated the palm tress, as well as fade out the planet in the background some more: 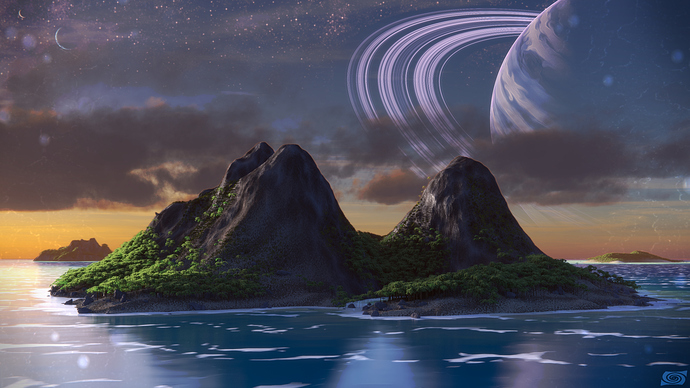 i think i’m reaching my limit on this one! might need to learn some new techniques. any crits?

Is good but the water could be improved…you may try to use the ocean modifier, if your pc allows it

This is nice. The island is very realistic, though i believe that the trees are still too translucent or saturated. The planet is beautiful also, it looks like it comes from a dream. A suggestion for the ocean is that you should use the ocean modifier, as mik1190 said. But if your computer can’t handle it or you don’t need extra high poly geometry, here is node setup for a bump map I created quickly, using only procedural textures, so that you can see an example of something simpler:

(the sky equirectangular is from cgskies.com)

As you see the plane has only 4 vertices, so everything is happening in the bump map.
The mixing of the noise texture with a higher value for the scale with the noise of a lower scale makes it so that ther are big waves with smaller waves on them, the voronoi texture adds some sharp, high and wild waves, and the wave texture adds some waves in the direction you want, either in rings or in lines, depending on which option you choose in the dropdown.

Another tip is that fireflies are from time to time useful, and in this situation i believe you could benefit from them instead of having a bad time. When I look at the sea directly to the reflection of the sun, there are some very small sparkles that usually disturb my eyes and I can’t look at them for more than a second. I believe that the fireflies from the noise of the render could help you achieve that effect. Else, you can try the technique with the following compositor node setup:

You basicaly create a matte of the fireflies with the “greater than” (math) node, then move the image 1 pixel to the right and then mix it with the original so that the moved image shows up only where there are fireflies.

I believe that with some fine-tuning of the ocean and the trees materials, the image you created will be amazing (no that it isn’t already).

I have now created a thread about the ocean node setup, were I have taken it a step further and added some foam to the ocean, so check it out if you are interested.

I like it too,
I would suggest turn any specular on the landscape off,
If one is not looking closely it looks like the stars are in front of the planet

Other than that I would say everything is fine

wow, i’ve got some great critiques here! thank you all for you input.

i’ve finally had a few hours to work on this, so i focused on the water. i haven’t worked with the tress or island textures too much yet. here’s what i’ve got (although i still need to implement Jonathan’s fireflies suggestion). I think it looks a bit better. 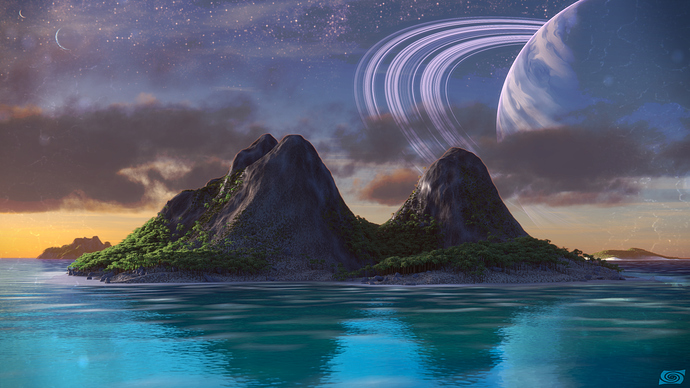 Water detail feel better but possible to aqua/blue for the scene?

The image might be stronger if you move the composition slightly - rather than looking straight on at the island, would it work is the island were more prominent in the left third?

I like the first water texture just as much as the last one you posted. The waves just look more turbulent in the first one. I guess it depends on what you are trying to achieve . Really nice work .

The latest water material is a large improvement, in my opinion! I might add a displacement or bump map to the island to add texture (see andrew price’s cliffs tutorial for an example), but it looks very good as it is, honestly.