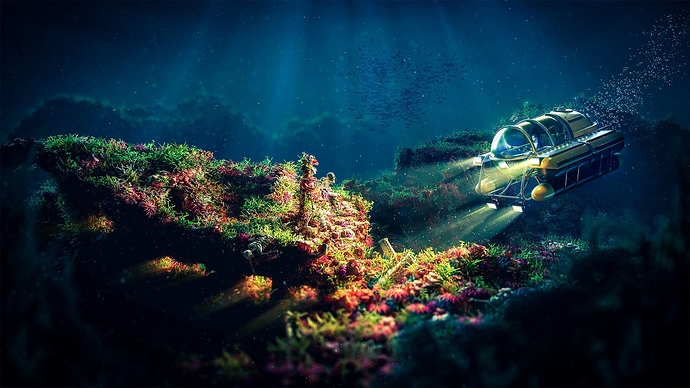 Work done in ~3 weeks. I don’t know how many man hours.

The full resolution images physical size is 4800 x 2700 in pixels and it took about 20 hours to render in Blender with my GTX 960 TI GPU.

When it was rendered, I took one work day to edit it in Photoshop. Some glow effects made up, vignette and depth of field. For depth of field effect I used a separate pass, called “mist pass” that I rendered out as a separate layer and by using it as channel, I could blur the background areas only without blurring any important elements.

Nice. The skeleton get lost in the middle but it’s better that way so one can find it on your own.

Liking this, not a little, a lot. I wish my wee laptop could handle this sort of stuff!

Nice. The skeleton get lost in the middle but it’s better that way so one can find it on your own.

That skeleton thing is something I also had in my mind when creating this and my friend also pointed it out, but he was like you (and me) to think that the picture works also by this way as some kind of overview picture. I could’ve done some close up renders to show with this too maybe.

@Bunc Thank you! You can always use render farm

Great job! Love the detail and the vibrant result. Only (tiny) detail I would change in this is that the sub is too leveled for such a rough (under the sea too) environment. If you could rotate it a bit in a more ‘dynamic’ pose it would look a lot better imo. Again, just nitpicking. Congrats! (Bought a GTX 960 and waiting for it atm. Is it good?)

very nice scene, I like colours and mood of that piece