I’m sure there are plenty of questions like this asked here all the time, but recently I’ve been trying to work out the best balance between high enough levels of detail for quality modeling, while also balancing out lower levels of detail to avoid slowing down my not so powerful computer graphics.

I did a little research on some movie cgi monsters, trying to gage a baseline, and I found that Godzilla from Legendary’s 2014 reboot was supposed to have been made of 500,000 polygons, while the Alien Queen from 2004’s Aliens Vs Predator was 200,000 polygons.

The Blender interface seems to reach its limit when I create a model with over 2 million vertices, 2 million faces, and 4 million tris [not sure if the tris are supposed to be counted with the faces, since I heard two tris can count as a quad]. Does that essentially mean that the model I’m building is 1 million polygons total?

Here’s a screen capture of what I’m working on, subdivision level 6 [as far as I can go before Blender starts to seriously lag]; 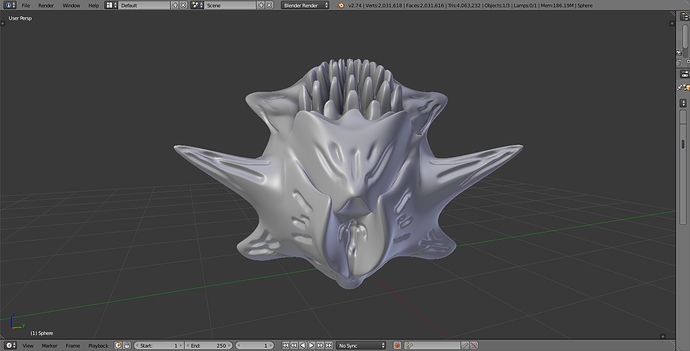 In Blender polygons = faces and they can have 3 or more vertices. Info editor header on top says you have twice as many triangles as there are faces, which means all polygons on the model are quadrilaterals. Polygons are eventually triangulated for displaying them on the screen (and rendering).

So does that mean that I need to base my calculations off of the tris only?

Thanks for the advice!

It should also be pointed out that Hollywood CG movie monsters are going to be using some kind of displacement map system and the stated polycounts don’t accurately represent what you see on screen; the 500’000 poly Godzilla was definitely subdivided and displaced during the rendering process and the on-screen model has millions of polys worth of detail.

How exactly does that work, and is it something I could do with Blender?