Hello, just watched a interesting documentary on how to live longer. And it seems like they have found some kind of drug that increases the antioxidant levels in the body. Aka our ability to resist the way oxygen slowly ages us. Just like metal rusts. In tests they did on mice, it doubled their lifespan. And this is a drug, which means that you take it like medicine…and it will double your lifespan. They also mentioned, growth hormones, that will make you younger!

This woman took growth hormones at the age of 50. This is how she looked before:

And this is her after taking hormones I think she is close to 60.

And I know this is a sensitive topic, but I think everyone should have the right to know about this…I myself think it’s amazing. And if you are afraid of over population, listen to what they say at the end of the video.

This raises some interesting questions…

Well do we deserve immortality? which is surely where this will lead. I did not watch the video, as it is late at night, but it has been bookmarked for later.

What about side effects? Surely we can’t be comparable to rats, can we? Do I WANT to be as old as 150? Oxygen may not age us, but surely there are other things? like our bones wearing out. How much would this cost? Are we making the margin bigger between the rich and the poor by having the rich live longer? What about blackmarketing this product? And I think that the governments would administer this drug to developed countries first, and may give the drug to developing countries much much later, if at all. If we can now reverse age, what happens when disease spreads? surely your immune system weakens as you grow past your prime years. Do we really want an army of 150 year olds running around with robot flu, or whatever the next pandemic may be. Who is giong to take care of 150 year olds?

Well thats just some food for thought, I’d love to hear some of the answers to these questions.

Actually the reason they experiment on rats is because they are similar to us. (the rats). If you want to become 150 years old…umm if everyone you knew could be 150 years old wouldn’t you want to be that old. That is like saying, everybody is going to live to at least 60 years of age. But why would I want to live that long, I can rather die at age 20.

Bones doesn’t wear out, they wear out with age. And it’s not like we are not aging, we are just aging slower. Because of our better resistance to oxygen. It’s not like you reach age 80 and you can’t walk. When you are 80 you will look like a 40 year old.

And as for all the economic questions, yeah rich and poor countries that could become a real problem. You can’t buy something like this, you can’t just hand it out to the rich. That would start a war for sure. So if they make this, they will have to come out with a plan to give it to everyone that wants it.

And our immune system doesn’t wear out. You got it all wrong, you will look and have the same immune system when you are 80 if you were 40 today. You should watch the video, because they answer a lot of these questions in it.

I don’t want to live that long.
The main reason is that I’m scared of what will become of America and the Earth by then.
I do not advise this site, for the fact that there are some curious sexual advertisements/videos on the side.
The only reason I watched the vid was because I was curious about the topic.

That documentary seems to have been produced by the BBC early 2008. As a counterpoint, here is a news story from late 2008 from the BBC:

So god switched up the way aging works sometime in 2008?

Ive got some snake oil around here somewhere that will increase your age to 300 years…Yea! Thats the ticket…annnd it also drops a new car in your driveway every 5 years…yea…and…it makes the opposite sex crave you…and theres free beer!

If you live any longer than 60 years, your gonna get bored.

I am looking forward to going to bed and not having to get up the next morning…THAT will be a good day.

Actually, according the the Bible, people lived into their 900’s before the great flood.
The oldest was Methuselah, living to the ripe old age of 969.

actually the oldest person from the bible is Enoch, he is about 2009 years old, because god took him, he actually was in body for 365 years before god took him, so he never died

I’m curious to see how long people could live with that drug, living that long may be of interest to some except for the fact you’d end up spending out your retirement nest egg and you’d need to get a job at 110 unless you don’t retire for the first time till you’re 110 years of age.

And there is a no religion rule you know that applies to both devout athiests and devout christians.

SENS Foundation was founded to develop, promote and ensure widespread access to regenerative medicine solutions to the disabilities and diseases of aging. …
says google.
http://www.sens.org/ 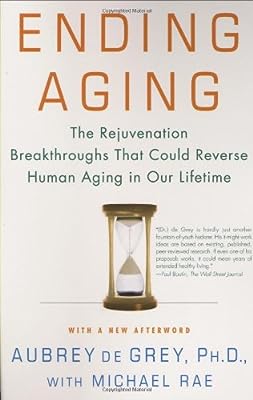 Ending Aging: The Rejuvenation Breakthroughs That Could Reverse Human Aging in Our Lifetime

With a New Afterword Must We Age? Nearly all scientists who study the biology of aging agree that we will someday be able to substantially slow down the aging process, extending our productive, youthf ...

That documentary seems to have been produced by the BBC early 2008. As a counterpoint, here is a news story from late 2008 from the BBC:

Antioxidants ‘cannot slow ageing’
That is weird, if you watch the video. These worms, lived twice as long…but in this article. It sais they didn’t. Maybe they are hiding something…hmmm…