I think I need to get some outside view on this, since I looked at this scene already for too long. The image is about a dragon rider resting at the edge of a lonesome canyon to think about her future.
There are 2 topics I still see problematic in this image: What I immediately noticed is that the rotation of her hand is awkward. Try making the pose she’s making- having the thumb on top with the arm at those angles is painful and difficult at best. It puts a ton of strain on the shoulder, especially the rotator cuff, and it’s far more comfortable to have the hand sideways (palm facing down). Angling her hand and wrist so they are in less of a strained position will help a LOT with the realism.

as j_claytonhansen pointed out, the posing make the character in an un-comfortable stance.

The composition can be improved by giving a bit more depth and for example, giving more importance to the character on the screen. But it can be the other way around, the dragon much bigger and the character quite small in the screen.

The image is also a bit confusing because it’s hard to get what is she doing, even more she doesn’t look at the ring.
I would go for something simpler, she can look at the dragons in the background ,getting ready to loin them. or something else but simpler to get.

It’s also hard to understand that she can actually ride the dragon, we can also think that the dragon is going to eat her given the expression of the dragon and the fact that there are missing elements that ties the dragon and her.

And for the lighting you can lower the HDRI and rely more on lamps to get a more dramatic lighting and an emphasis on important parts.

All that said, there is already good stuff here, the canyon looks good, the dragon is interesting too.
For the character, it’s quite hard to nail down realistic people, but it’s not that bad. For now I think it’s hard to get into the image because it’s a bit confusing. Try to mess the elements around to see if you get something more interesting.

Thanks a lot for your feedback, Joseph and sozap.
I try to incorporate most of them into the image. It will take some time since the assets are currently modeled only to the boundary of the image. So showing more clearly the ability to ride the dragon needs quite some additional modeling work. But it’s a good point, that deserves the extra efforts

Was trying to incorporate the proposals and changed quite some things. As Joseph and sozap mentioned, I turned the hand of her. I also turned her head to look more in the direction of the ring.
The larges part of the update was to extend the dragon, since the model ended at the image boundary. Now I could move him backwards and bring more of him into the view. I also modeled a saddle and a shield, that serves the rider as equipment. I think there’s definitely an improvement. So thanks to Joseph and sozap.
Now the space between them looks a bit empty. I will probably create some more stuff to scatter between them. And also will work more on the lighting, which wasn’t touched since the last time.

Any other critics and proposals for improvement are welcome 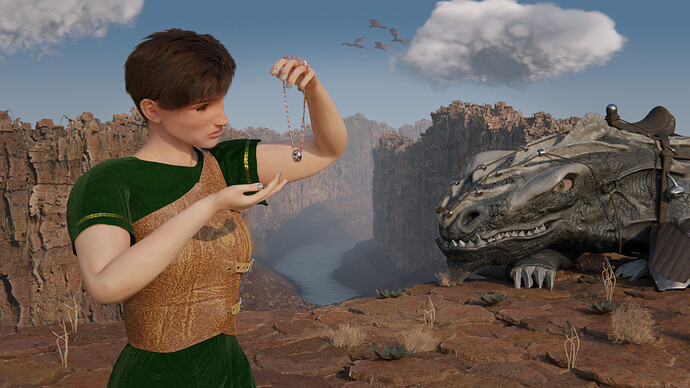