Hey blenderers, it’s good to be back to Artstation challenges ( https://www.artstation.com/contests/dragons-rise-the-forgotten-realms/challenges/160/submissions/67397 )
this one certainly wasn’t easy in my mind ( initially ) since fantasy, dragon and magic ? All of that sounds highly organic and organic modeling is one thing I’m still learning. But with the time constraint I had to fuse some styles for time optimization. Also painting, drawing,… like great concept artist isn’t my forte so this challenge will be a chance for me to explore more methods of art creation.

So to have a nice set of images, I’ll need a backstory first, that will help me shape the world in the concept greatly. The story I want to use is quite simple:
“A prosperous civilization where magic and technology blend in together, held upright by the fusion of aesthetic dated back in the time of ancient Rome, fairytale-like structures and a hint of the modernized world”
The setting of the first scene is about an ancient marble and gold body dragon found in a dusty, run down ancient temple. The dragon was brought back to life and became the center point of a ceremonial parade later, he meant a great deal to this society since he signifies wealth, prosperity, strength and magicraft.

The plan for the second shot will be about the temple the dragon was found in, but it is subject to change, since I’m in focus of building the first scene now.
.
.
SCENES ARE DONE ! 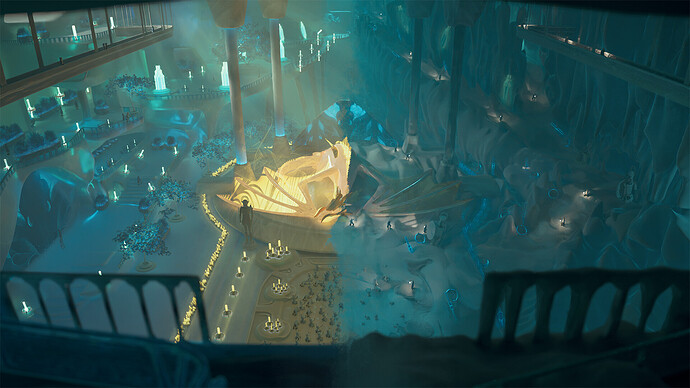 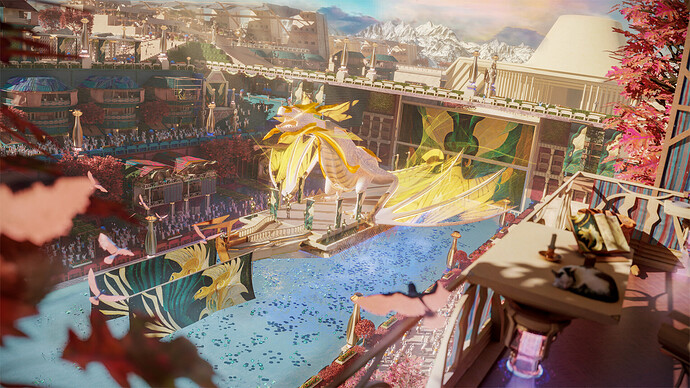 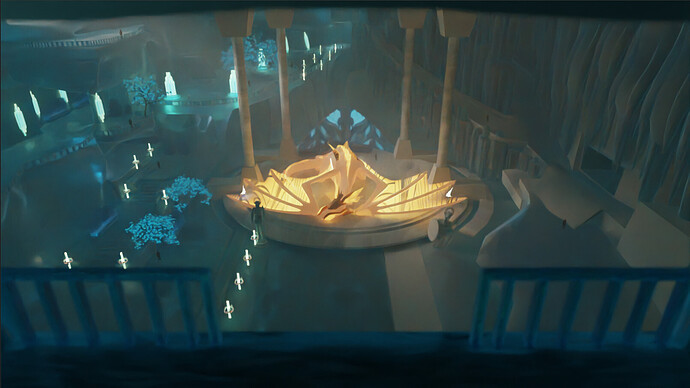 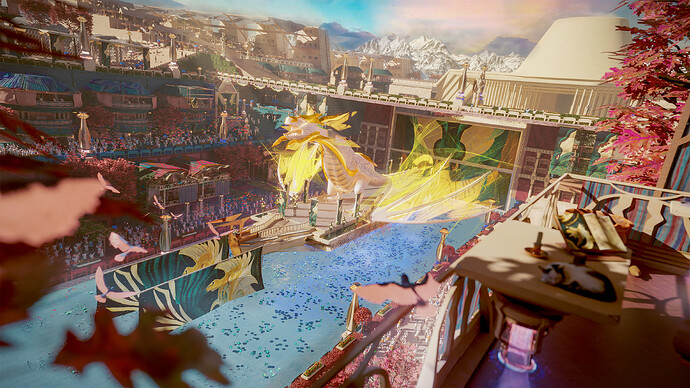 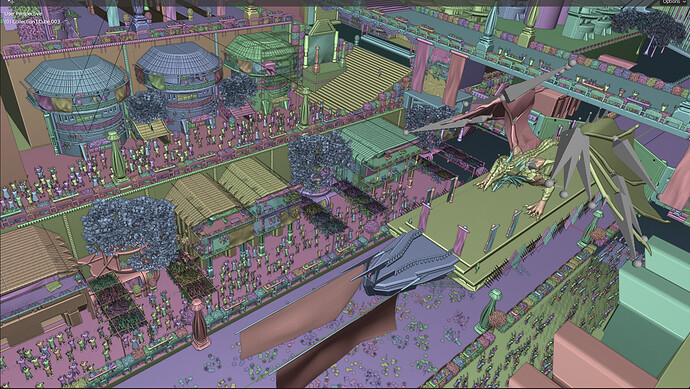 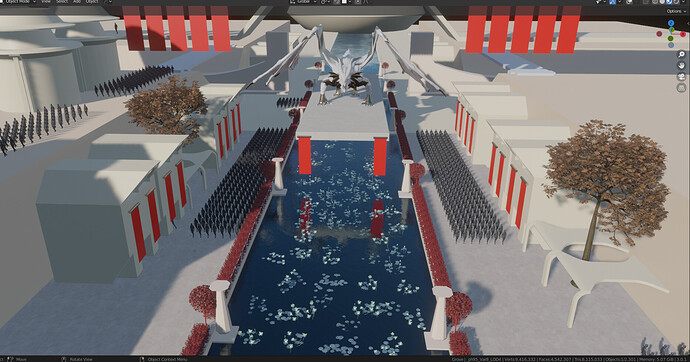 Aw YES, progressing pretty nicely and the best thing happened today was this cool volumetric effect I managed to untangle from the 3 hours mess of node building. The material is for a magic effect magically lifting the table. 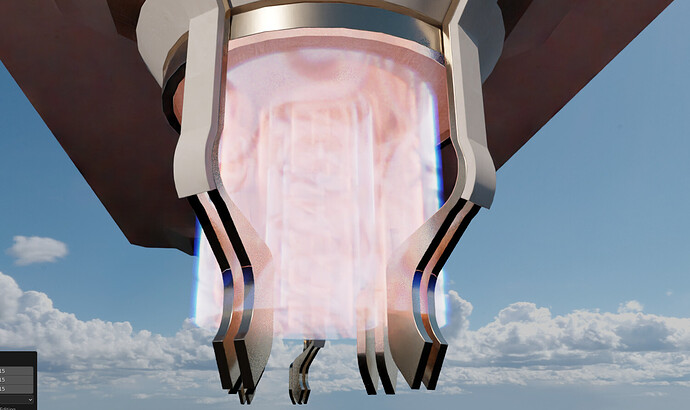 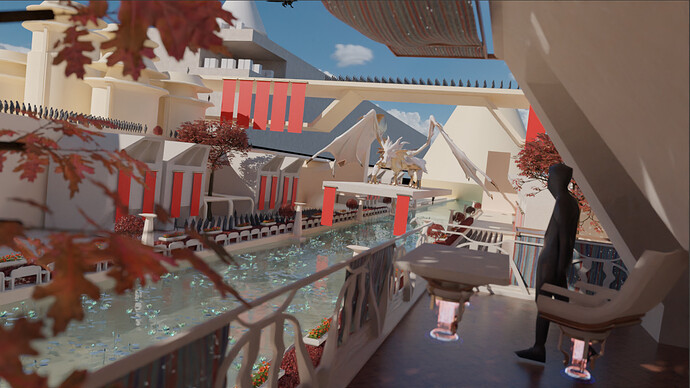 I’m still building the house for now but project like this is a nice opportunity for me to incorporate more material into house design, for this case I want to use wood, marble and shining fabric, metal… which create a nice combination of luxurious, prestigious material but still remain somewhat familiar 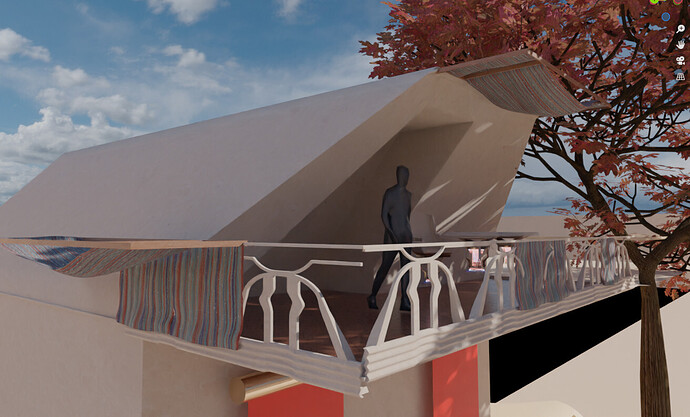 Progressing on the graphics like poster, wallpaint,… I think they look extremely cool 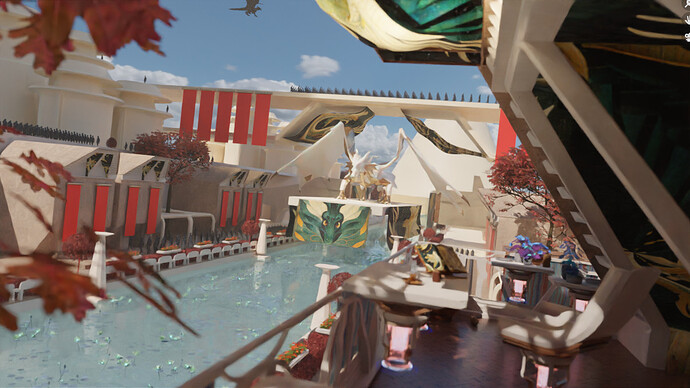 Messing around with Photoshop color grading 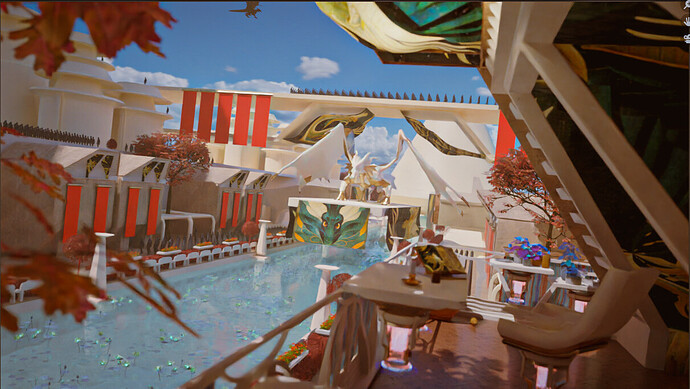 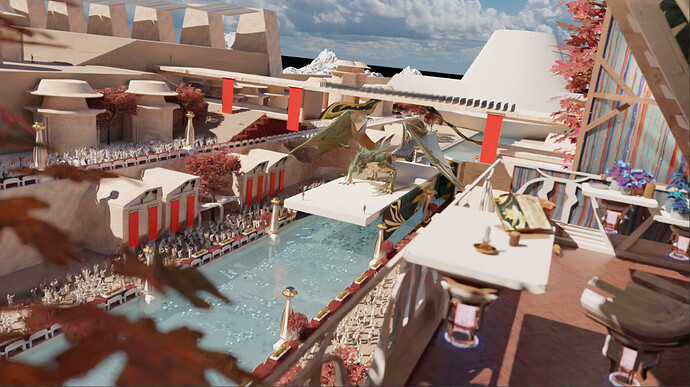 I love those houses so much, quite calming, relaxing and seems like a nice place to chill by the riverside 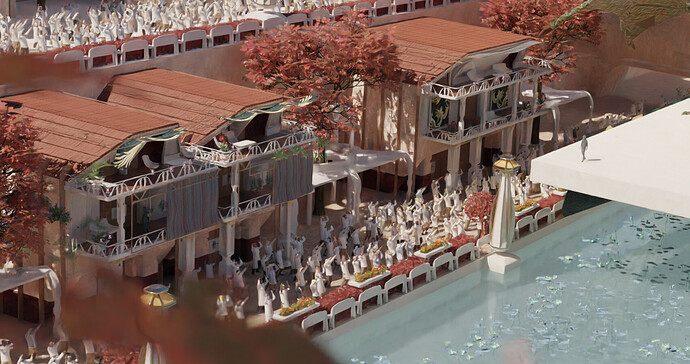 My plan for tomorrow 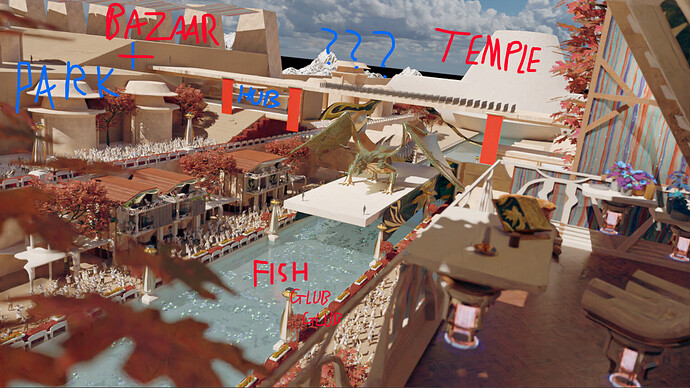 Seriously cranking more details into the scene, I’m turning it into a Wimmelbilder of sort rn 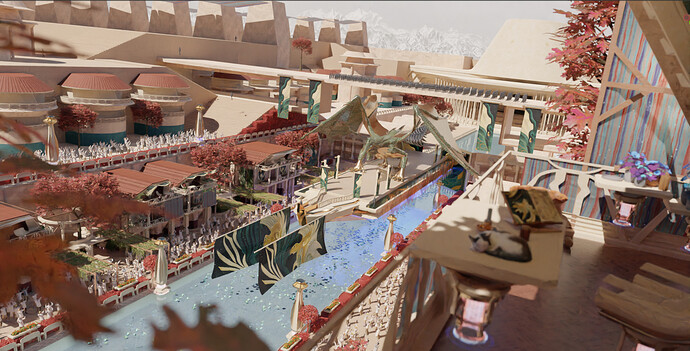 Night scene hits differently, this night lighting is only crudely set up, I imagine that a properly set up nighttime lighting is going to make the scene looks extremely awesome 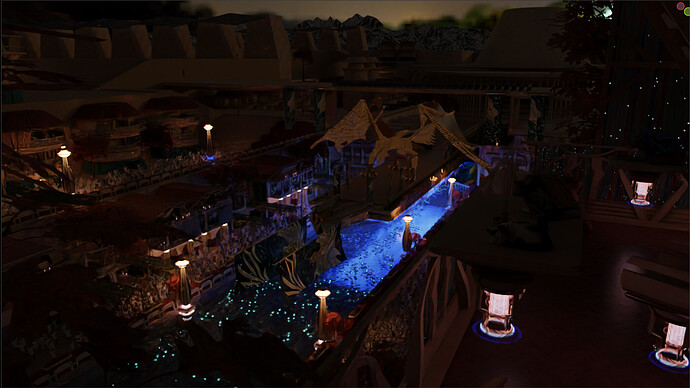 But this is just an experimentation tho, maybe once the challenge is over I’ll do the whole night scene.

Almost done with the scene, only the bazaar part left to do. 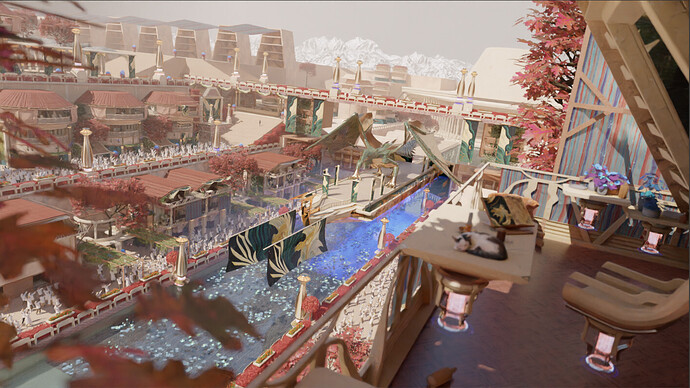 Scene 1 is done ! All in its 4k glory ( I was going to do 8k but it seems a bit excessive and my machine was practically crying ) 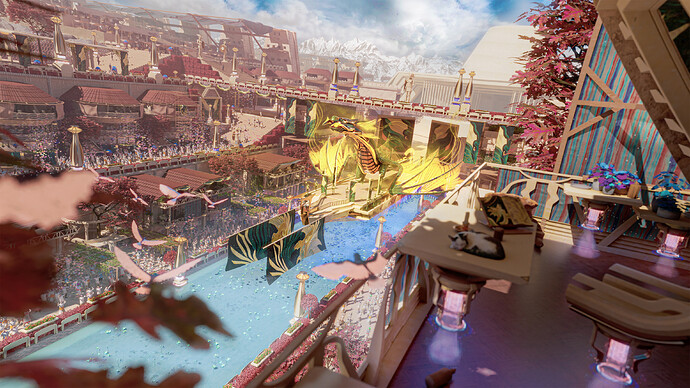 Now onto the second scene !

That scene looks massive, and beautiful. Although, my favorite part of the image is the cute little cat on the table.

I just had a really nice color change for the first scene, to help with the contrast as well as focal point of the environment, it is still highly detailed tho but I can’t keep fixing this scene over and over again since the second scene still needs to be done 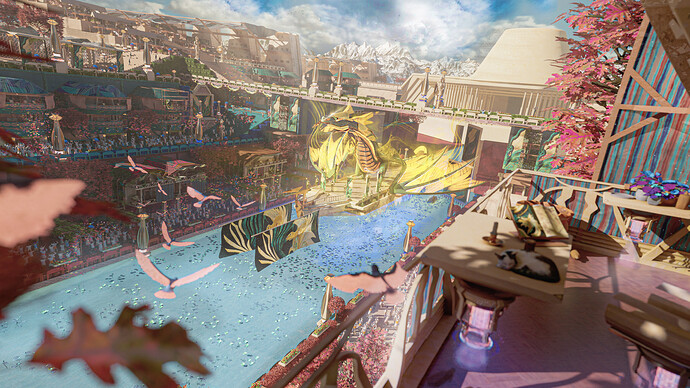 Are you using any 3rd-party assets? Looks really cool by the way.

Thanks ! Only the trees and foliage, the birds are premade models, the dragon was a basemesh but I put lots of my design on top of it, the rest are done by me.

This could easily be an mtg card, absolutely stunning

Thanks a lot ! Hopefully the second scene for the challenge could also be an mtg card haha.

The second one it focus on the concept of “Telling the story of the same environment in 2 different timeline”.
It is inspired mainly by Dishonored 2 mission “A Crack in the Slab” where the left side of the scene tell the story of the dragon and the small civilization that depended on it while the right side show the scene of a frozen and desolated village after the dragon lost its energy. The right scene are also planned to show explorer discovering the dragon, holding magic light orb like the thing that energize lifting magic in the first scene. 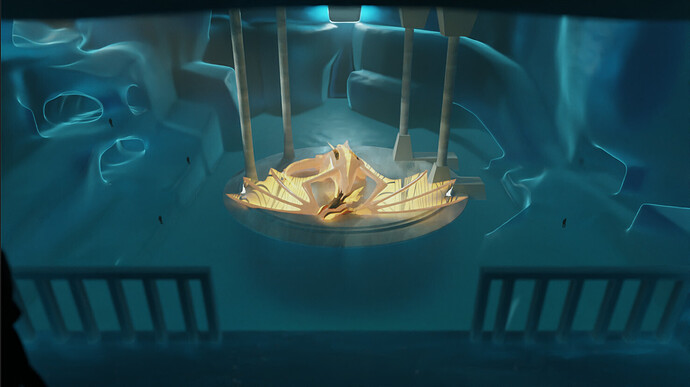 Second scene is coming along niiceeely, I’m already in love with the cool color tone mixed with a warm highlight in the middle 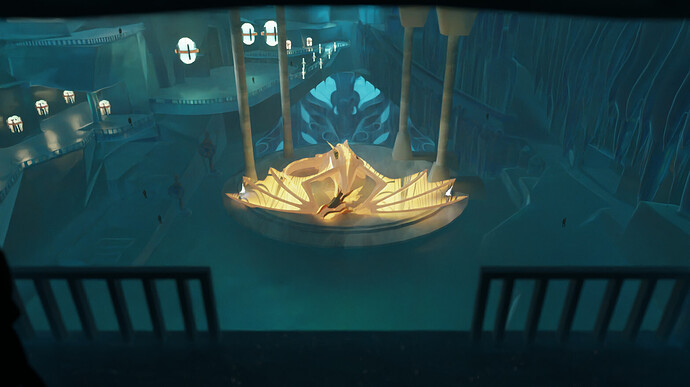 P/S: I hate rigging and posing so the sleeping dragon might looks kinda off hah

Lots of changes and progress today