I’ve started a new project, a dragonslayer. I had a nice idea for an dragon themed helmet, so I’ve decided to make a whole new character. I’ve get the idea from another helmet of an charakter I’d made for my work, which shape remembered me on a flying thing which took place on the head of the wearer. 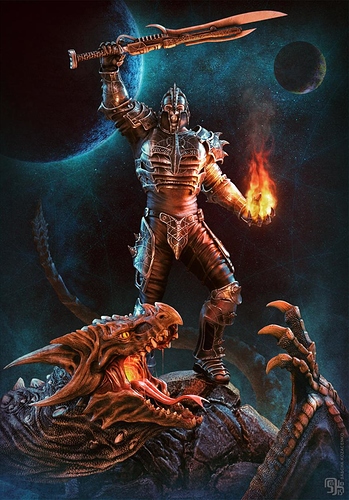 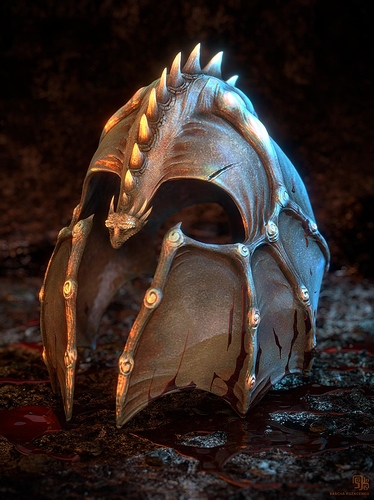 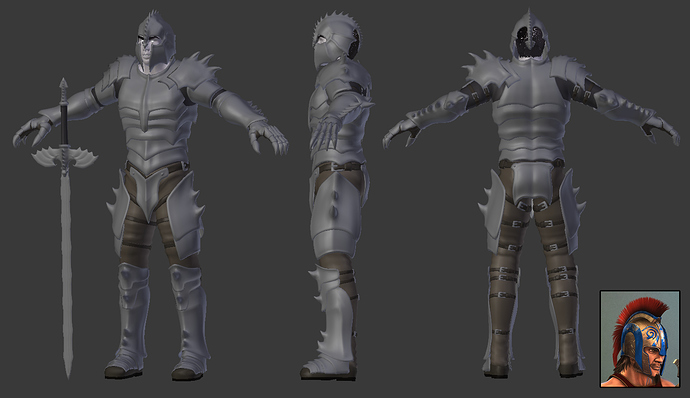 that is an awesome helmet!

Thank you for those motivating words

Here are some new images, some new sculpts with zbrush and finally a test render of the unrigged model with displacement maps and textured in Blender. My Laptop is really powerful (i7 and 12 gig ram) but I never worked so hard with it, sometimes I wanted to throw it against the wall, but finally it worked well. It’s still not finished, but on a good way 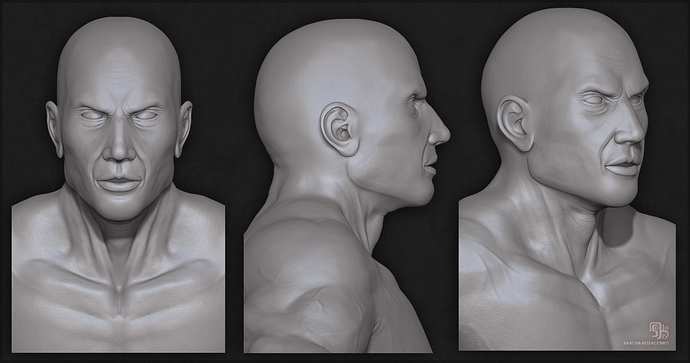 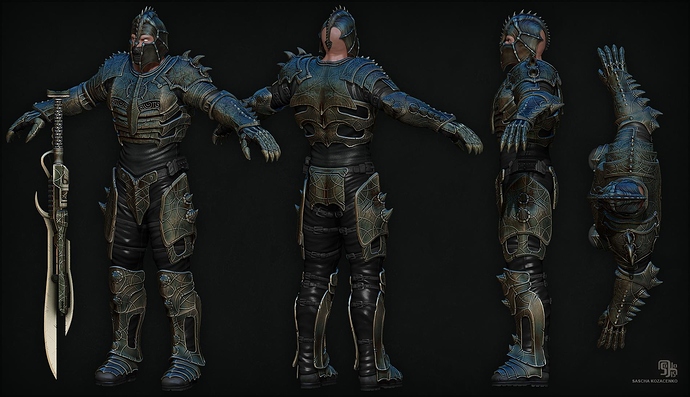 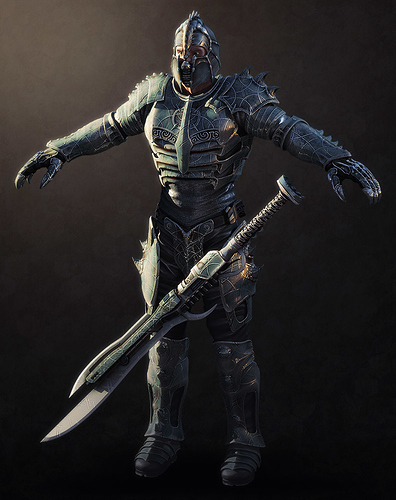 Really a solid armour design.
Shader is great but I wish you’ve kept the more organic touch there was in your first helmet render.

I don’t know why I prefered it but it looks more believable.
But I do imagine the amount of work you’ve put in this armour sculpt, really professional and nice.

I swear it’ the same material, it’s just the lighting what makes the difference and this is not final, maybe for the soldier as a stand alone, not for the final artwork.

I swear it’ the same material, it’s just the lighting what makes the difference and this is not final, maybe for the soldier as a stand alone, not for the final artwork.

I feel ashame, you don’t have to swear it, you’re building a master piece here.
what is the final goal? Will you rig it and animate it or is it for a still artwork?

@pieriko Yeah, rigging is finished and my goal is an artwork with a dead dragon in the back- or foreground, maybe he stands with one feet on the dragon in a winning pose and additional some posed images with only the charakter.

I had no ambitions to rig the whole charakter, armor and clothes, then I found the Weightpainting transfer tool in Blender and it’s so awesome, I was able to use my rigged basemesh to transfer all my weights from this mesh to the sculpted body and finally to the clothes and more. My whole rigg was finished in less than one hour

and it made fun. Sometimes I nearly forgot how awesome Blender is.

Here’s a pose for example, it looks a bit stiff so far, but it’s just a test. Some more are following soon, but it’s too late again and I have to go to bed

edit I saw that some scratches are mirrored, I’ve changed this, I’ve just forgot to make now displacement maps. 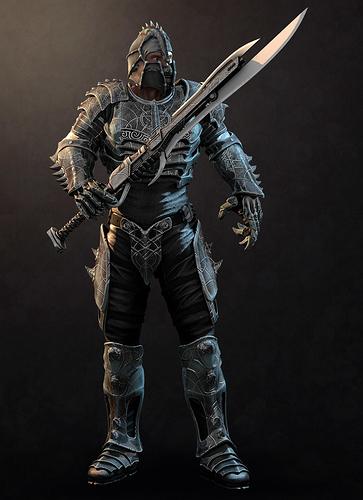 Here are also some renders of the Dragonslayer head and the dragon for the artwork (those Pictures are rendered with Keyshot for zbrush, not Blender, but I’ll also show them) I bought Keyshot some days ago and get some awesome hdri maps, I’ve also used them in Blender for the render of the posed Dragonslayer, I’m really glad that I’ve done this. 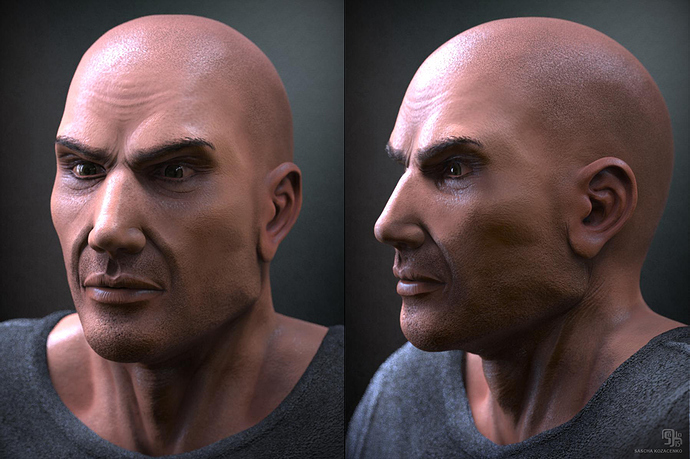 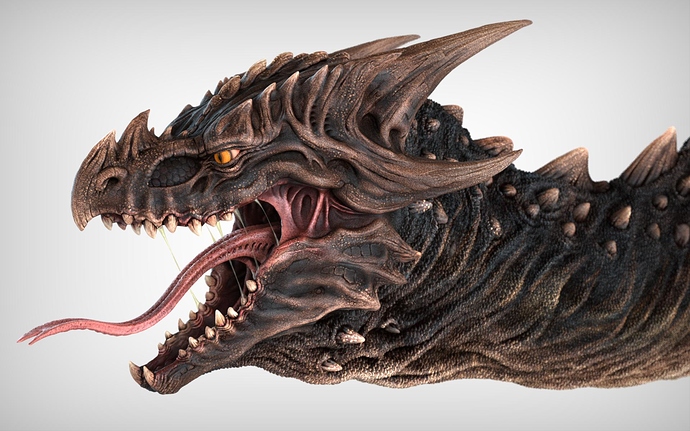 Ok, here’s the first battle pose. It looks better than expected and it’s exactly what I wanted. The plan was a warrior which looks a bit like the Necromonger out of the Riddick universe, not too evil also not really good. 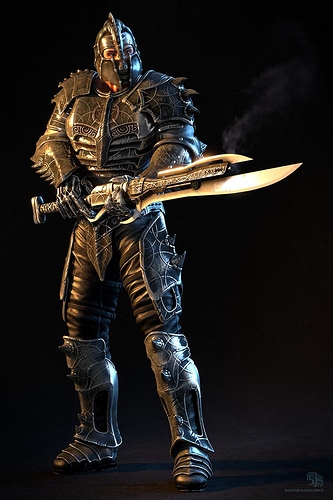 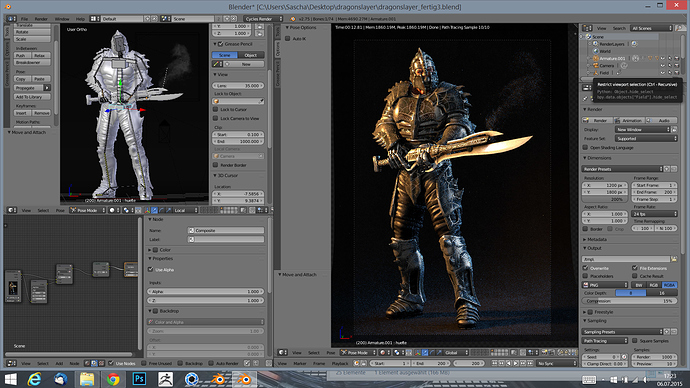 It was sadly not possible to make a fighting pose with the sword. The sword is simply to large for the image, but I think the backside is also an important view. 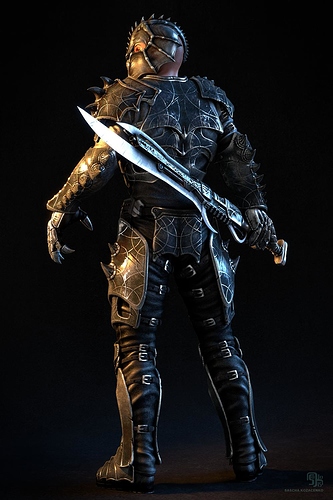 This is really fantastic, congrats.

This Armor looks awesome is it based closely on the movies or mostly your own imagination?

@tawdry It’s not based on the movie, it’s just something like this gothic-space-knight style and similar Materials.

Here’s a little preview of the final artwork, the rendertime is going to be nearly unendurable, but I hope it’ll worth it when it’s finished and it looks as good as I wanted. I’m not sure about the Background, maybe I’ll show the tail of the dragon and/or some kind of moons and planets like the movie “Pitch Black”. 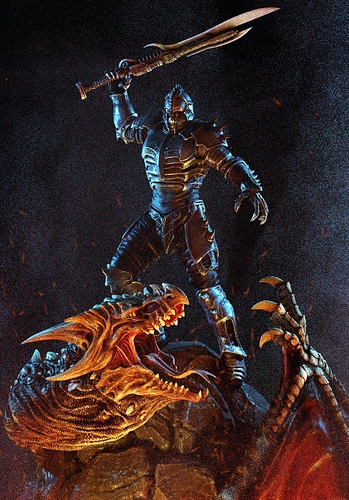 I like this a lot, very creative look and feel