Dramatic difference in render speed between a similar Intel 950 and AMD FX-8150.

Was wondering if anyone could give any insight into why I’m getting such a dramatic difference in render speeds between 2 of my PC’s?

The scene I’m rendering is Earth and uses a few 16k textures and a subsurf modifier with displace on it, nothing fancy really. But for some reason the same scene is rendering much much slower on my other PC’s, here are their specs.

All run Win 7 64 bit and have similar ram speed.

I also have an AMD 6 core @ 3.80ghz with 8gb ram which also renders this scene stupidly slow…

I can’t for the life of me think why there is such a difference with the Intel and AMD set ups. They have similar Cinebench scores and when I’ve used them before they have been a similar speed to my Intel PC. The only thing I can think of is the difference in ram, 12gb versus 8gb? Perhaps something to do with the large 16k textures?

Any advice would be much appreciated!

Have you tried another scene that definitely fits within the 8GB on the 2 AMD PC’s?

Since you said they were the same before, chances are you could be forcing pagefile/swap usage if the RAM limit is exceeded, which would greatly slow the render

Try some of the bigger textures at 8k instead? That would reduce them by 4x, which could save a fair bit of memory.

Check the task manager to see if all your RAM is used.

Hi zeealpal, thanks for the reply!

Yeah sorry when I said they were the same before I should have mentioned when rendering different projects. As normally if I have a large animation to render I split the frames across the different PC’s.

I might take 8gb out of one of the AMD PC’s and put it in the other so it will be 16 and see if that makes a difference. I could probably try what you suggest with the texture size as well. If I do it on both the Intel and AMD machines and the renders are then roughly the same time then I’m guessing it might be a ram issue slowing down the renders.

Just open task manager and then render to see how much memory is used.

Hey thanks for the reply Tame.

Here’s a screen shot whilst rendering. Am I right in thinking that this scene is using around 3 gig? So the 8 gb in my other machines should be fine even with what Windows needs to run? 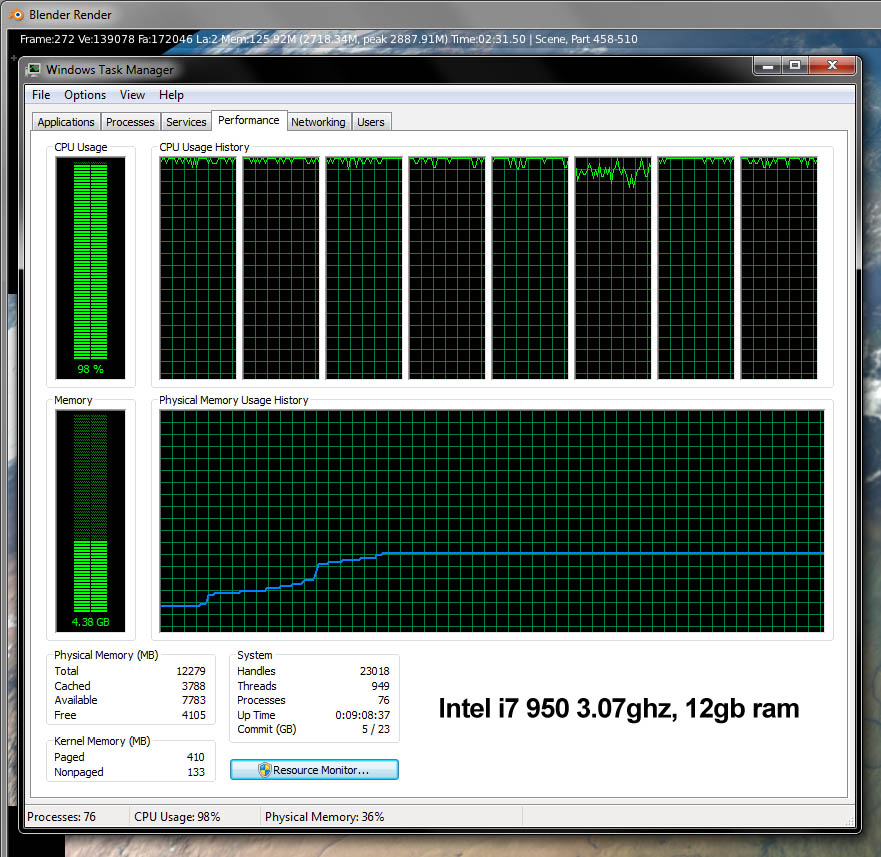 Hmm, can you show us the task manager on the AMD pc just to double check??

Such a huge difference does seem unsusal

Just to clarify, the Blender Versions are the same, and both are the 64Bit Blender? And if you render another scene with the same 16k textures, perhaps just on a few super high poly icosphere’s, does that difference still exist?

Ok, think I might need to put this one down to human error… I copied a fresh version of the file onto the amd pc this morning and the difference was no where near as dramatic. See attached image. The same frame takes 03:49 on the Amd set up and 02:31 on the Intel.

SO I don’t know what I did in the first instance to cause the same frame to take 13 minutes on the Amd!

Thank you for your interest with this issue, any help or advice is more than appreciated! 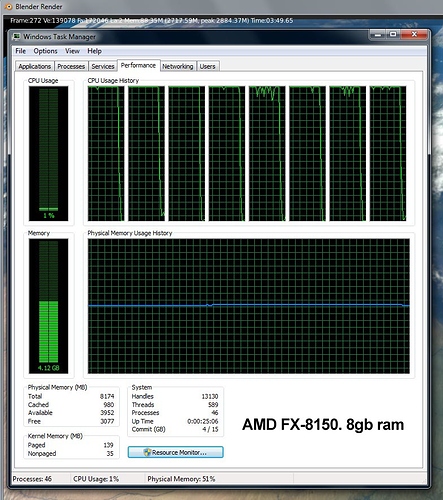 Atleast the difference is basically gone, perhaps it was because of different lighting in different frames? If theres more mirror/glass/reflective surfaces it can take alot longer, with both BI or Cycles

Yeah bit of an odd one! Must have been something I did… I think it’s because I tried it on 2 different amd machines which were both rendering really slow which had me thinking there might be an issue.

Yeah … if you, as a human being, used the word “dramatic,” well, there really is only one elephant that could be in the closet, and that elephant is: “the disk drive.” You over-committed the physical-RAM resources of the machine, such that the virtual memory subsystem valiantly tried to start paging … and the memory-reference characteristics of the renderer promptly murdered you. (If you’d glanced at the little red light on the disk-drive, you’d have seen it pegged at “continuously red.”)

It’s perfectly okay for the CPU to be pegged at “100% busy,” because its only other alternative is to be sound-asleep, but … basically … “if you over-commit memory, however slightly, you’re dead.”

Not to get too geek-technical here, but the fundamental algorithm that drives all virtual-memory systems is that there will be some subset of the “recently-referenced areas of memory” that a running program actually needs to have instantaneous access to … i.e. “paging is the exception, rather than the rule.” Rendering algorithms do not(!!!) “play nicely!”

If you’ve got, say, 8 GB available, set the render parameters (tiling and so-forth) such that the memory consumption hovers somewhere around … say … 7 GB. If the CPU is pegged-out at 100% on all cores, but virtual memory activity is near-zero, then … “perfect.” (Just keep feeding the system ice-water…)

I’ll have a look at what you said about the render parameters. For my not so technical mind, would throwing another 8gb of ram in the system help?..

Mm… not really. AMD 8150 (I am using it myself) isn’t an intel stomper. Remember that the gaming and computer fanbses hammered into with a flurry of insults. Basically, you are thinking of this the wrong way however. Experiment with the settings blender uses. Sometimes you need to adjust your pallet size, how many cores to use, ect.

Hey tangletailpro, thanks for the reply. Yeah I wasn’t that impressed with the 8150 when I got it a year ago, it helped me out loads though as I could render on it whilst still working on my workstation. I did think however that the performance would be similar to my i7 950 especially with the higher clock speed on the amd, in most circumstances the i7 is still quicker. I’ve also got an amd 6 core 3.8ghz with 3 GTX 580’s in it, so s decent bit of render power.

The main reason for posting was to see why there was such a difference in performance. Do you think it could be something to do with creating the scenes on my i7 and then not changing any of the settings when I render it on another PC?

Well I think I’ve kind of resolved this issue…

Out of interest I tried the same scene on the AMD PC using Blender 2.63 rather than 2.65 and the 8 core AMD now renders the scene around 20 seconds quicker than the i7.

Could it be that performance is some how hampered on AMD PC’s with the latest Blender builds? Not that my tests are very scientific…

Yes, there are many changes between, tiled renderer that first come in mind, you better double check settings in Performance tab, as “tile size” changed completely, not it mean actual tile size in pixels, not number of tiles as old Blender version.

In 2.63 the default tiles were set to 8x8 when I opened the scene and it rendered much quicker than before. So I tried the tiles at 8x8 in 2.65 with the same scene but the speed was still stupidly slow, like 10 minutes per frame compared to 2 minutes in 2.63. But like you say the tile set up has changed so this wouldn’t make a difference.