I had so much fun working on my battle droid, I decided to give Star Wars another shot. The back-up heavy weaponry was a little more intense than the normal battle droids. Droidekas, or Destroyer Droids, were designed to kill, and even Jedi were hard pressed against them. 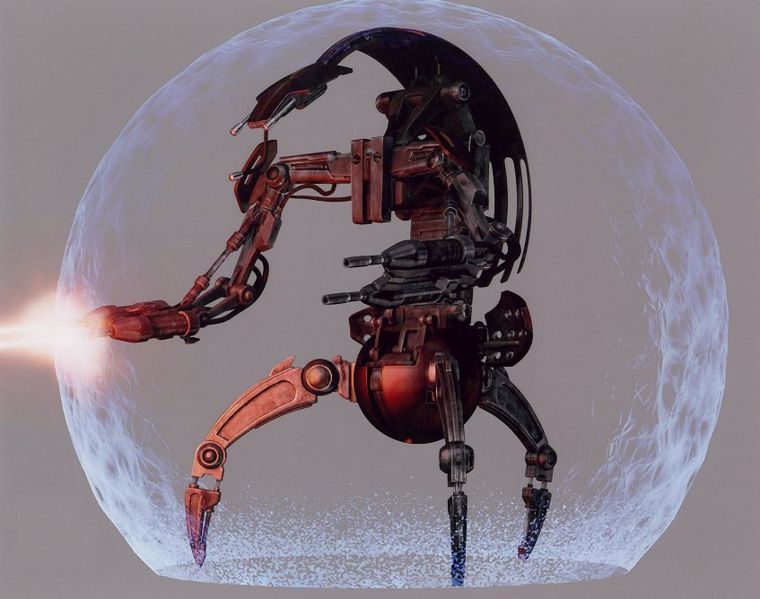 I decided to start with the legs, and move upward. 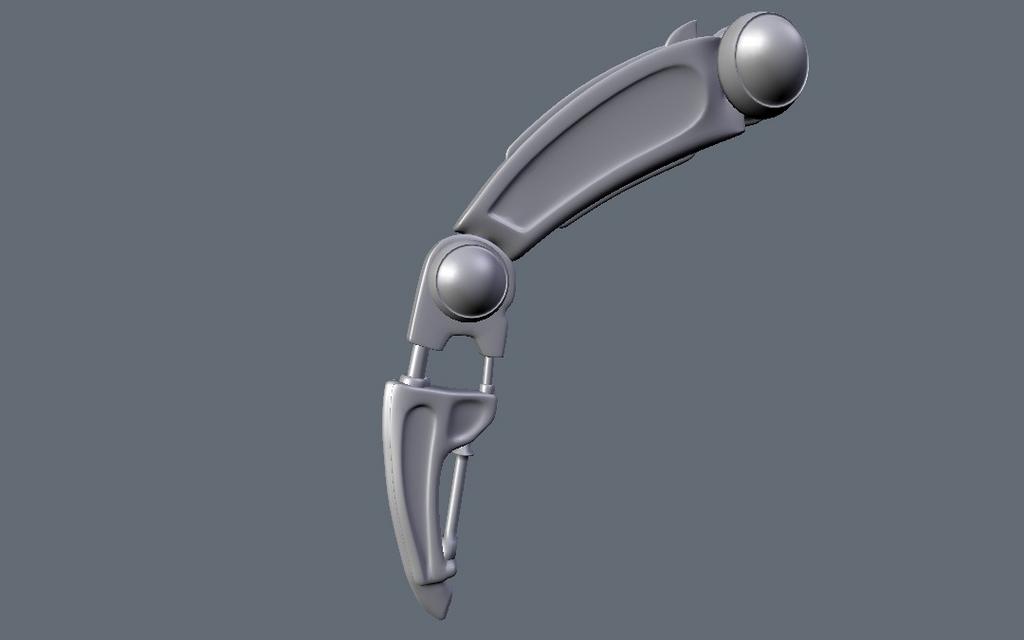 The sphere base is not quite finished, but… 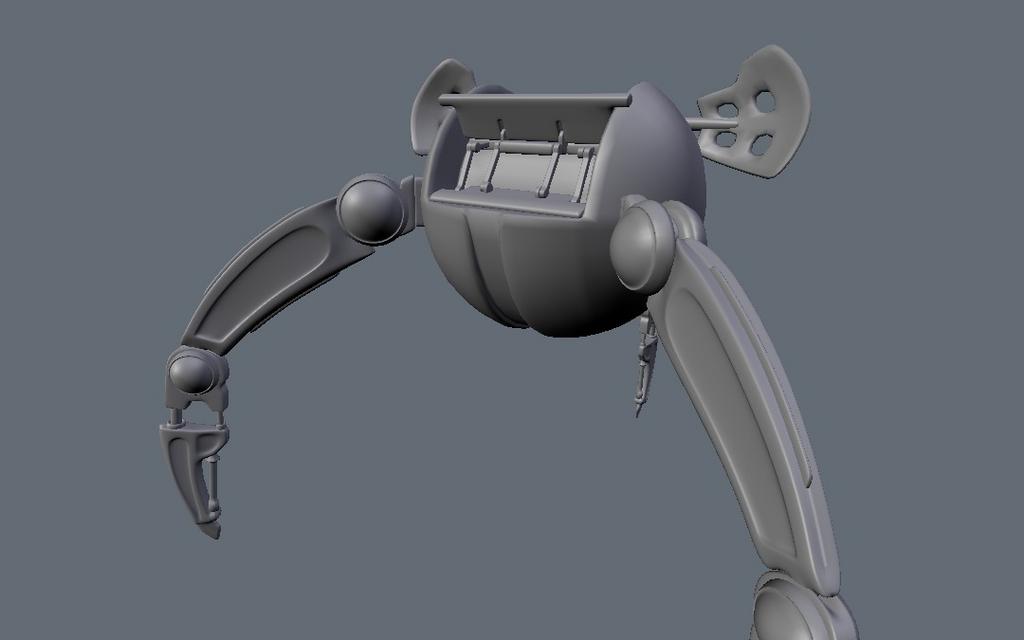 I have not decided yet whether I am going to try for complete movie accuracy, or just base my model on it. I will definitely try for realism (that is, if Droidekas can be called realistic…).

I am also considering releasing the model and rig under the Blender Artistic License, or something like it, when I am done.

I like the attention to detail keep up the good work,
I definatley need to do more modelling practice …

looking good, keep it up

Hehe, good times. I’ve also given that one a go at modelling, but it was quite some time ago so you are already off to a better start. We seem to have a growing amount of overlapping interests.

Not sure if you have seen that site or not, but the models are fun to play with. As always some are better than others, but the general standard is quite high.

Seeing as you are recreating someone else’s design, you may as well shoot for close to movie accuracy to get the technical modelling practice. It’s quite common practice for one person in a studio to design something with concept art and another person / team / etc to model and texture it. In this sense it is a fair enough skill to practice recreating other work from time to time as well as your own designs.

Only thing so far is keeping certain edges sharper - do you know about shift-E creasing edges with subdivision? If you do, thats great. Just checking because it is quite useful.

I wasn’t happy with the way the base looked, so I reworked it. Greebled it, I think the term is. It still isn’t quite the way I want it, but it does look better. It will probably get reworked again later.

EDIT: Oh, I also started some textures. The brown, then 3 shades of the grey (metal). 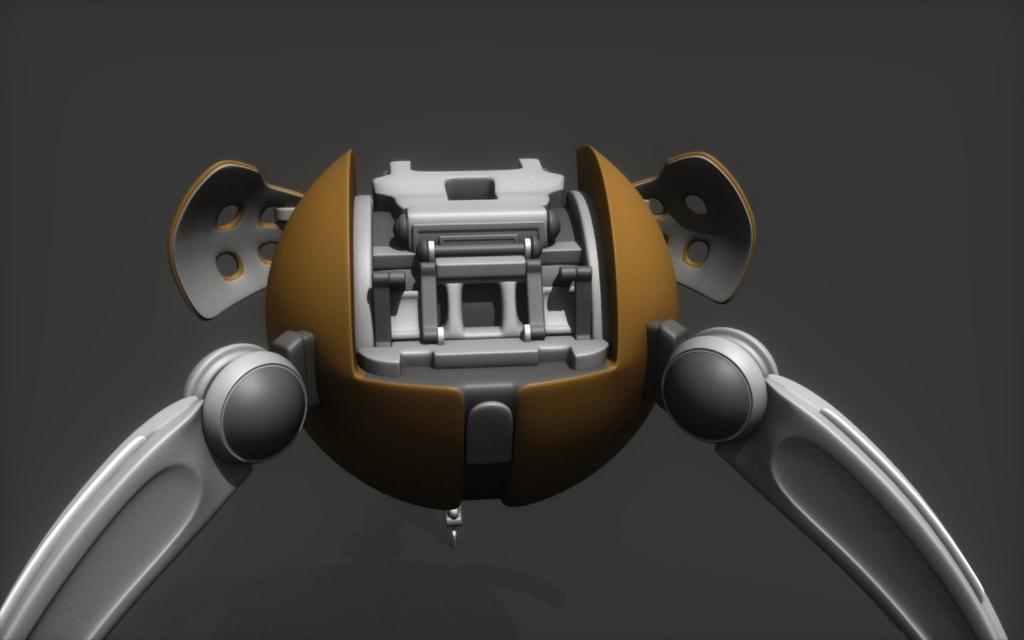 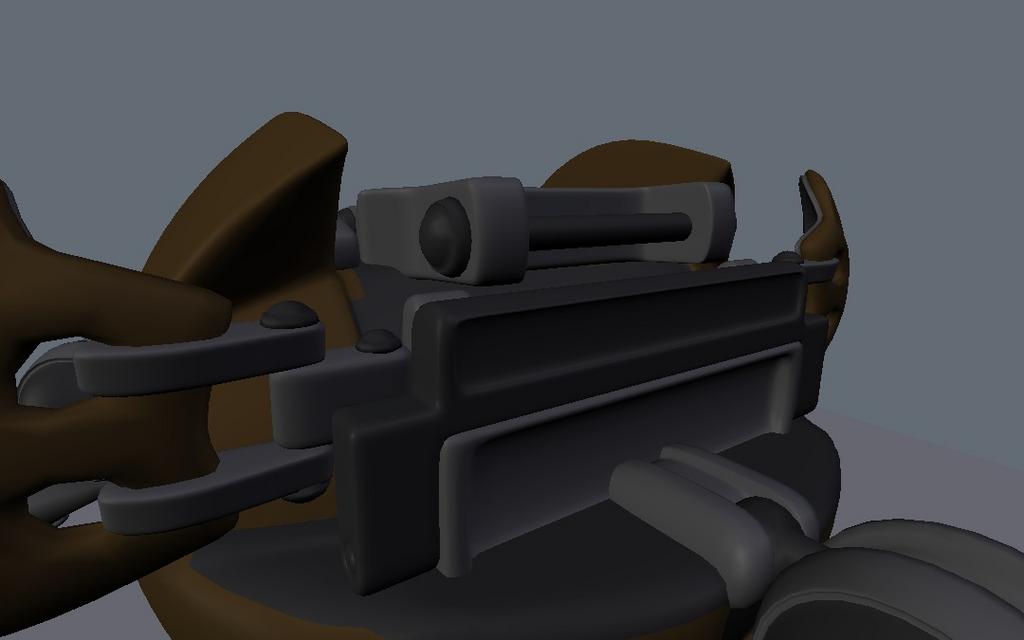 @Sudai: Thanks! The entire purpose of this project is to get some experience under my belt. This would be about my 5th major project, and I just want to practice modelling. God willing, I’ll actually finish this thing some time, but in the meantime, it’s good for me.

@BenDansie: That is totally awesome. Tolkien and Lucas, LOTR and Star Wars. What could be better? BTW, I was impressed by your Battle Droid. Any chance of seeing a render of your Droideka?
As for the site, I can’t believe I missed it! When I started with 3D, I would download every 3D model I could get my hands on. And my favorite sites were ones with spaceships! (Later) Hmm, I glanced at it, and I have to say I’m impressed. (I downloaded the Droideka model, of course, but there quite a few other cool looking things there. Don’t you wish some of these sites had a [DOWNLOAD EVERYTHING AT ONCE] button?:D)
After some thought (and reading your post), I think that I will try for the movie version of the model. I do have one question, though. In professional enviroments, is the same person in charge of both modeling and texturing, or does that fall to seperate departments?
Umm, I had heard about the SHIFT-E thing, but I didn’t know what it did. I was actually control-R-ing another loop to sharpen my edges. Yet another hotkey learned!

Looking good dude! Can’t wait to see where this goes!

Although some edges look like they could use some sharpening.

DOWNLOAD EVERyTHING AT ONCE BUTTON!
Great idea, and I love the droid

You got a love it with the attention to detail you are giving it…Are you gonna put the shield on it? I havent tried the force field using the particle system yet. That would be cool to see it in action though…

hah!..once i saw this i though it was an exact copy from the movie!
This is great i really love the force field
Do you have any future plans for it?

My Droideka I would have made years ago now, not even sure if I still have the file. Might be part of my scattered archive of stuff somewhere. I think I made it in 3ds max, which I don’t have access to at home anymore. Let’s just say it was very early work…

The site can be a little frustrating with viewing terms and conditions for every download, but with the number of people who would be tempted to grab a copy of everything and make a fan film without giving credit, I can see why they did it to remind people.

I don’t have a huge experience in ‘professional environments’ yet, but much of it comes down to the size of the company. If you are ILM for example, I read that the Droideka had a team that took care of making it happen - modelling, rigging, animation. Studios that size have entire departments for modelling, departments for lighting and so on. There might be some overlap where modellers to a little texturing or something, but generally you would get more specific tasks at a big studio. I talked to someone once who was a graphic designer, then got into modelling and texturing at a large company and they have filled in for animation once or twice as well.

Smaller studios of 3-10 people or so don’t have much of a choice but to be flexible at many tasks. Which can be a very cool thing if you like to have a large feeling of ownership with what you are working on. It might be up to you to do entire shots instead of modelling background props.

So no set rules really, depends on the project and the company a lot.

Also, I add loops a lot instead of using shift-E all the time, but it is handy to keep poly counts a bit lower. Two options for the same sort of task.

Sunday afternoons are so cool!

I decided to glance at the base once more before I started the back. The pieces were sunk too far in, so I raised them out. I added and pushed a few more vertices around, and… 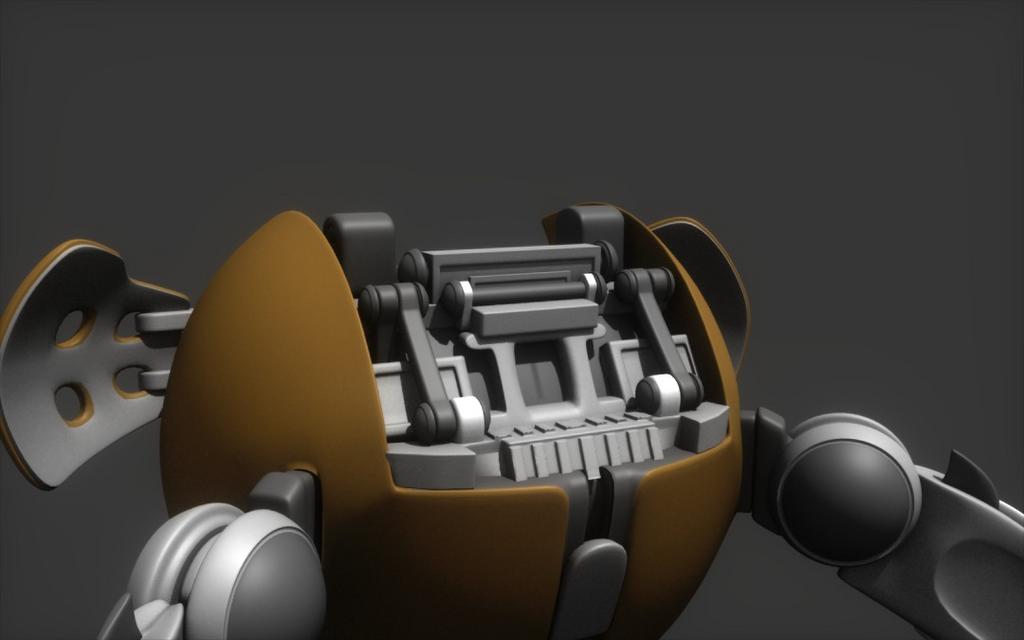 I then started work on the back bone. Most of it you can’t actually see in the image, so I checked a book out at our local library (Episode 1: the Visual Dictionary) and it has two pages devoted to droidekas. Using this, and looking at the afore-mentioned model from the afore-mentioned site, this is what I built. 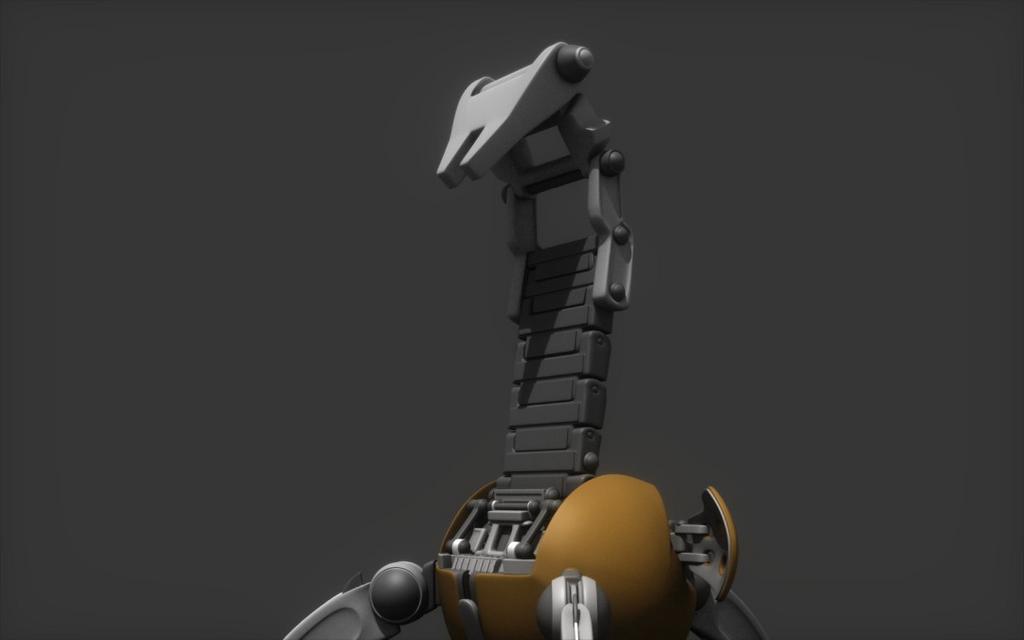 @Robo3DGuy: Thanks! I can’t wait to see where this goes too!

@Borgleader: Thank you. I did sharpen a few edges! (There are a few more that need to be sharpened, but I’m getting there)

@ALLEYCAT: Thank you. I think I will definitely try to work on the force field, but at this point I think I’m going to use a textured, translucent mesh with the glare compositor (which I have fallen in love with, as my renders show). As for action, well, let’s just say I still have to work on my animation skills. Rather, I have to create them.

@blendermakers: Thanks! At this point, the only thing I can see this in is a still image, but perhaps as I progress, an animation might turn up in the finished projects someday…

@BenDansie: Hmm…Interesting. I was thinking that larger companies, like ILM and WETA, had strictly separate departments for each major area, due to about 40 seconds on a LOTR documentary. (It was on the Balrog, no less!;)) I can understand at least some overlap between the modeling and texturing, because of UV mapping. I could have fun in smaller companies too, though. (“Watch closely, guys! These next few seconds are mine!”)
Don’t worry about the model. I’ve got a couple cd’s somewhere that I just unloaded my mess onto, and deleted off my hard drive. It was that bad.

I worked on getting the hood and the chest up. The chest has way too many polygons, but… 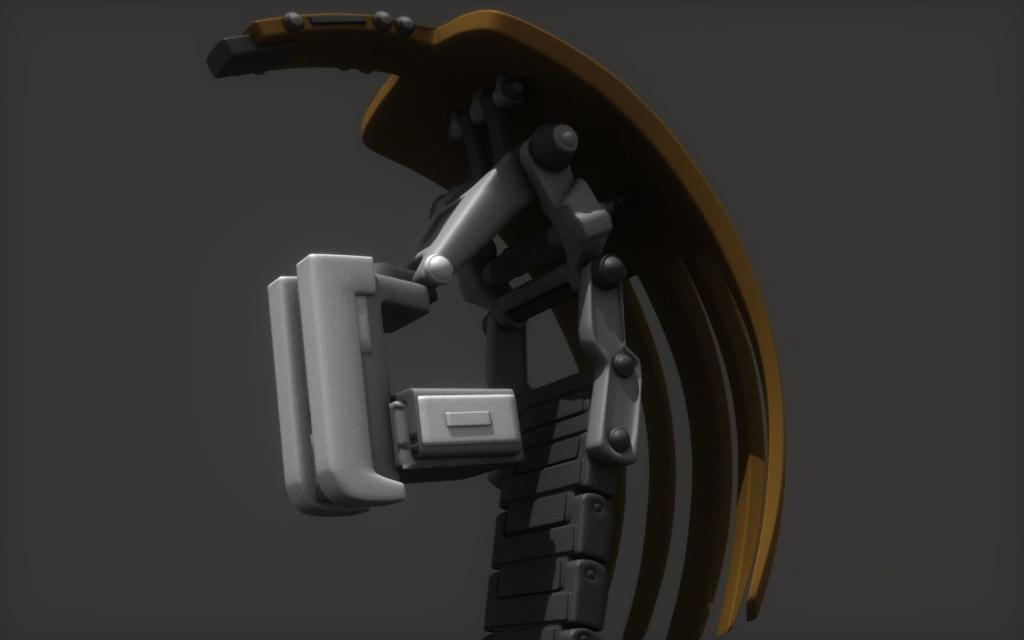 I think there might be a few artifacts there. I’ll have to look at it closer. 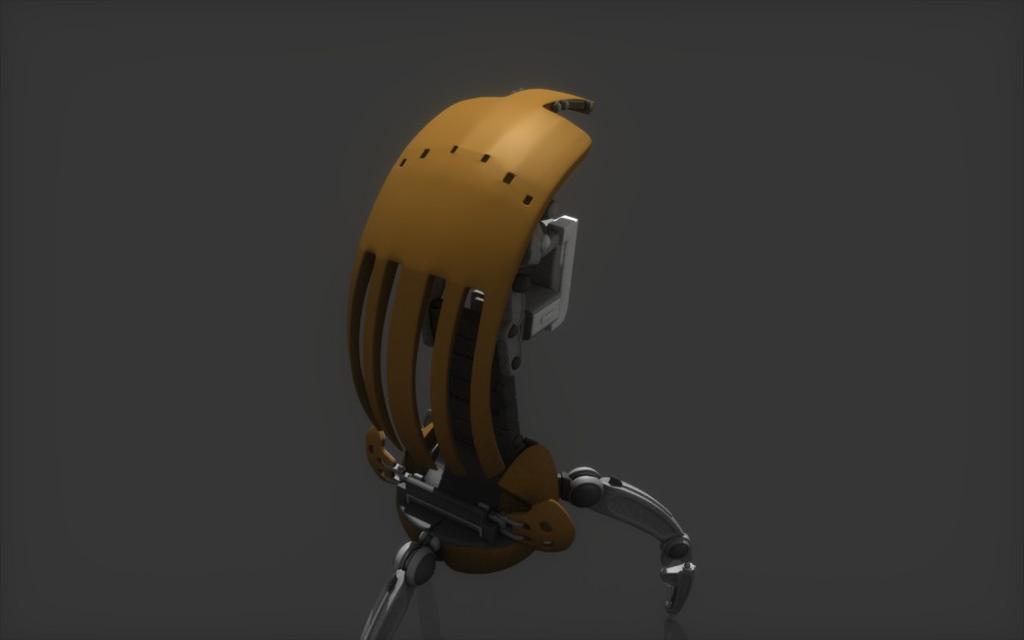 This is the entire droid so far. 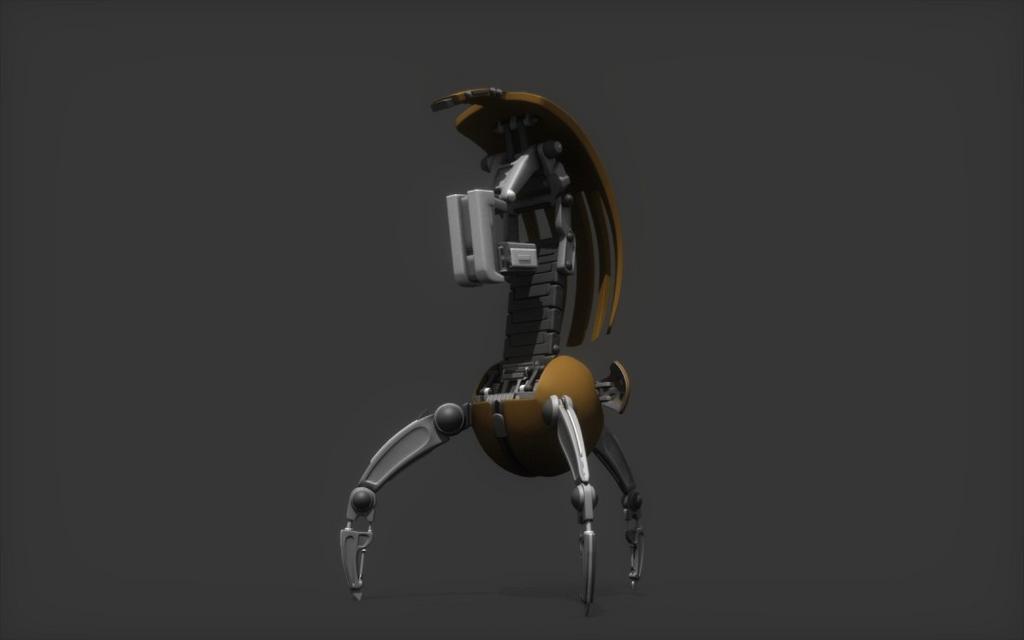 I threw a couple images onto my materials. I also added a bit of raytraced reflection to one of the metal textures. I then created a head, though I’m not quite satisfied with it. The problem is, I’m not sure why.

For some reason, it doesn’t look right. I’ll have to look at that a little longer. Suggestions? 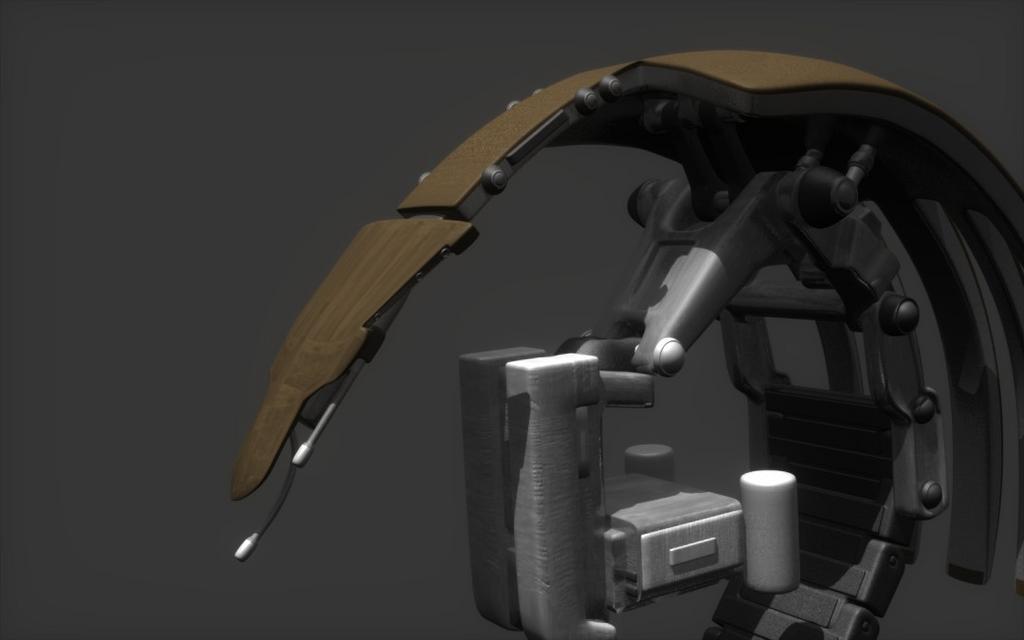 The shoulder pieces were next. 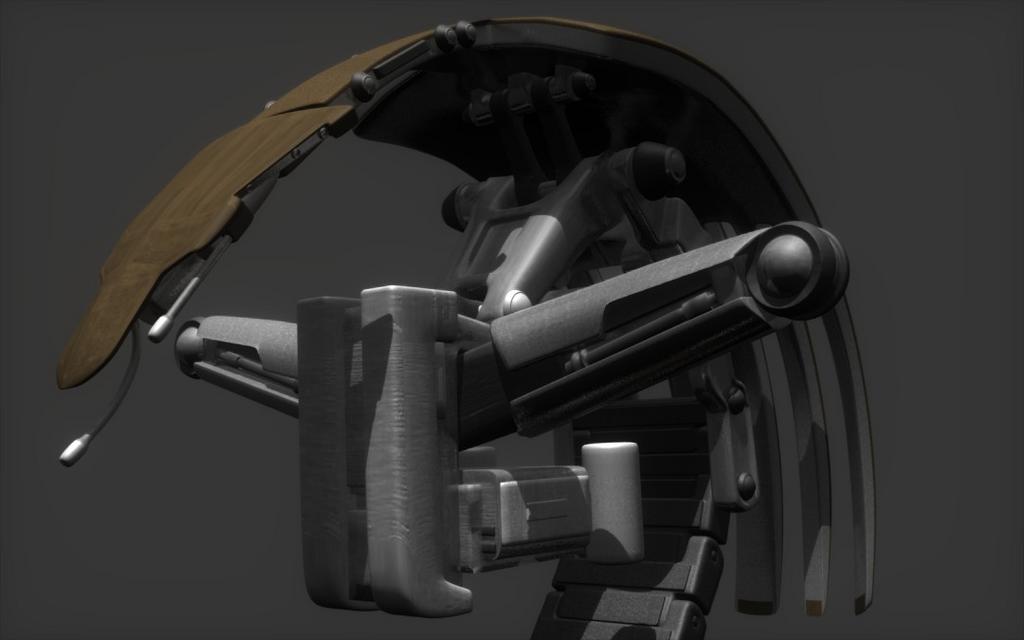 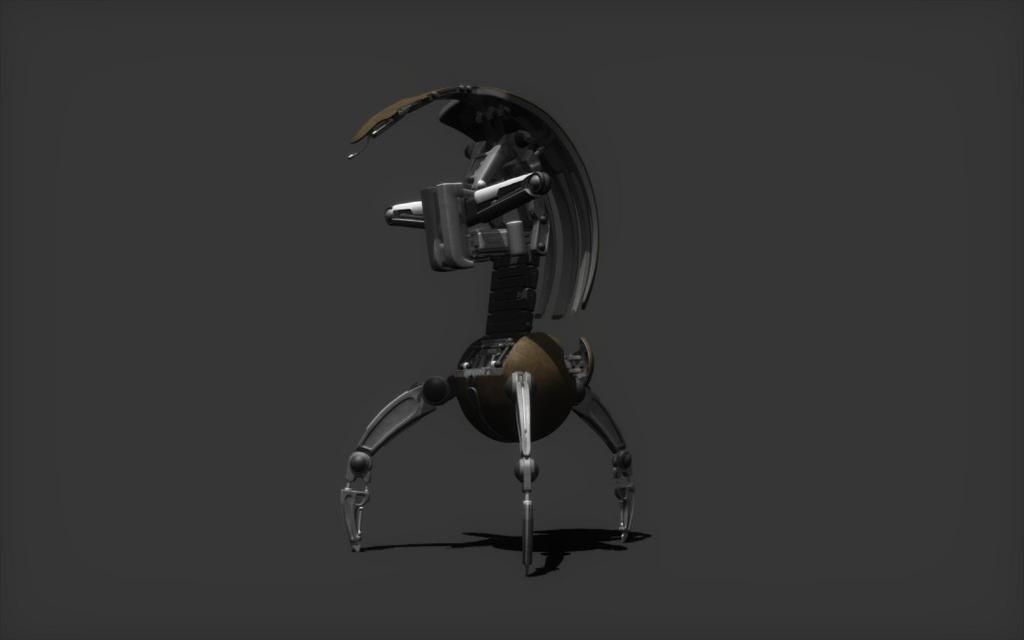 Note that in these images, I turned off AO and put in a hemi lamp. It decreased my render time by about 2 min. The last render was at 631,432 faces, and rendered in 25 sec.:yes:

@Borgleader: Well, I realized that the tc-rtc animation contest, ending in 2 months, was “The Machine”. If this doesn’t fit that, I don’t know what does. When I saw that, I started working double time on this machine. I might try my hand at animating after all and see what happens.

Excellent work and a very fun subject, have you thought about animation in your design? Will it roll and unfold? that would be quite a challenge IMO, but its fun to think about how to do it.

I think I have most of the basic mesh. Well, the arm is on, anyway. 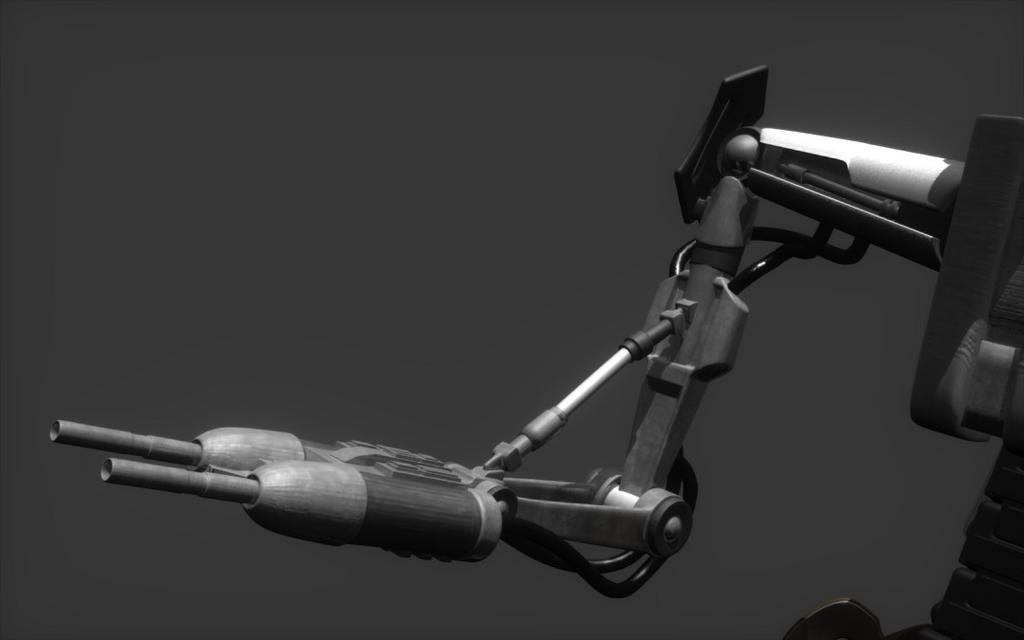 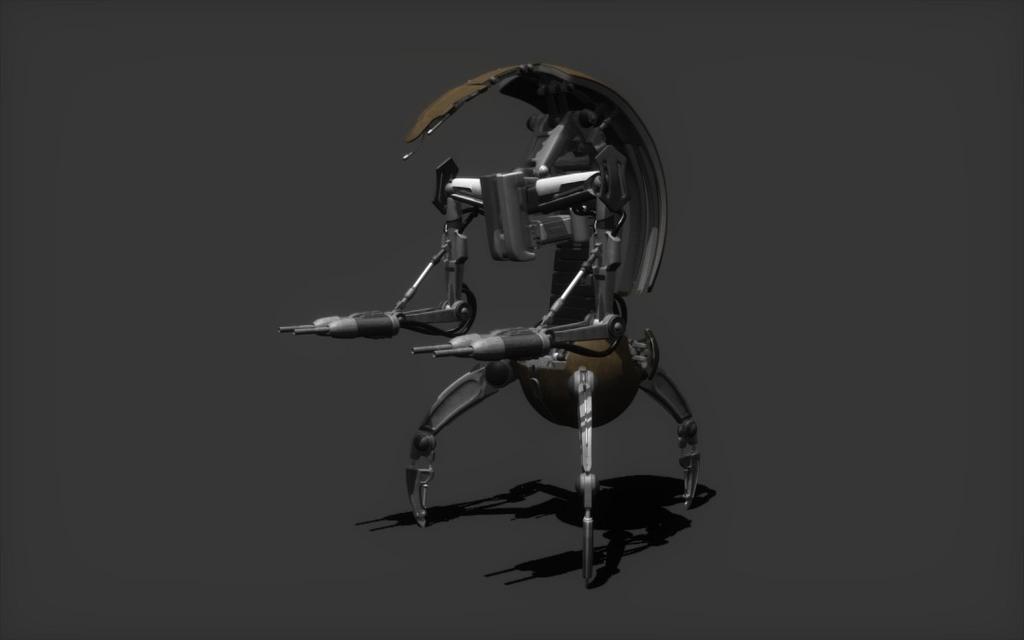 @Noobie: I was thinking about the rolling part, kinda. I used the model on the Scifi site as a proportional reference. I hope that this will work for curling it up in a ball. I’ll be seeing pretty darn soon!

I finished a nice simple rig. It’s made for IK poseing, as I’m not sure how to make a IK/FK rig. 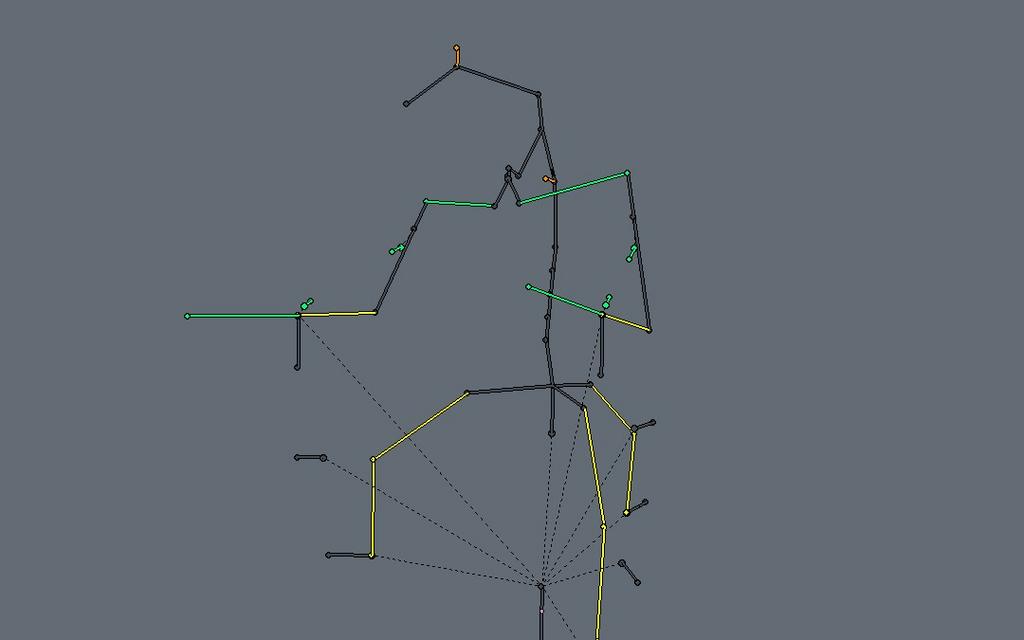 I then took 10 minutes, moved his arm, and made a simple animation. I will post it when I get the chance (I have dial-up, and can’t post it at home.) You can post animations, can’t you?

A frame from the clip. 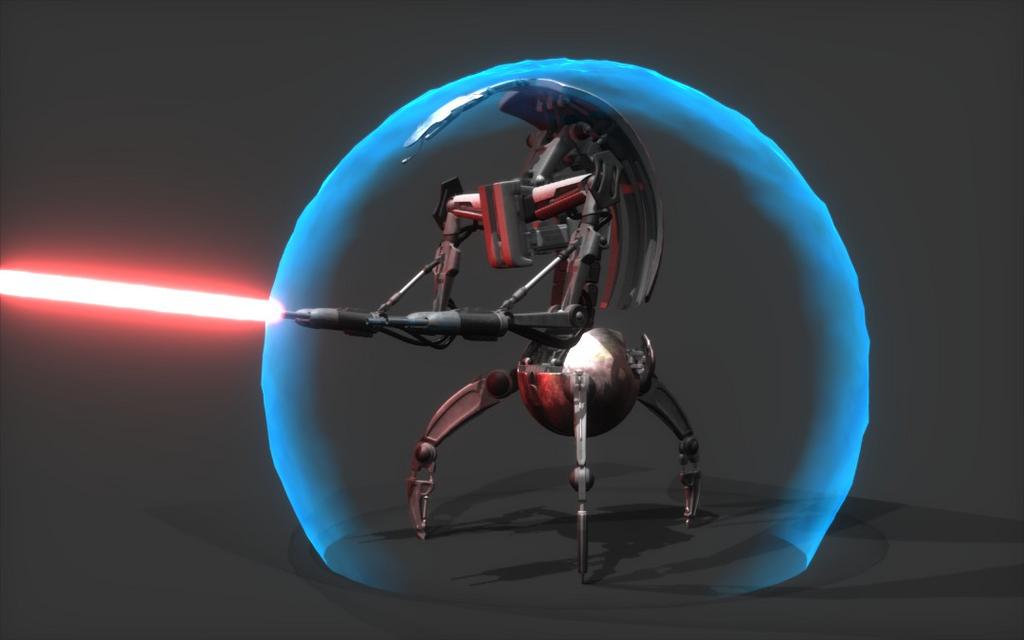 I also did a retexture. In the image in the book I checked out, the machine has a different color. It looks more like this. 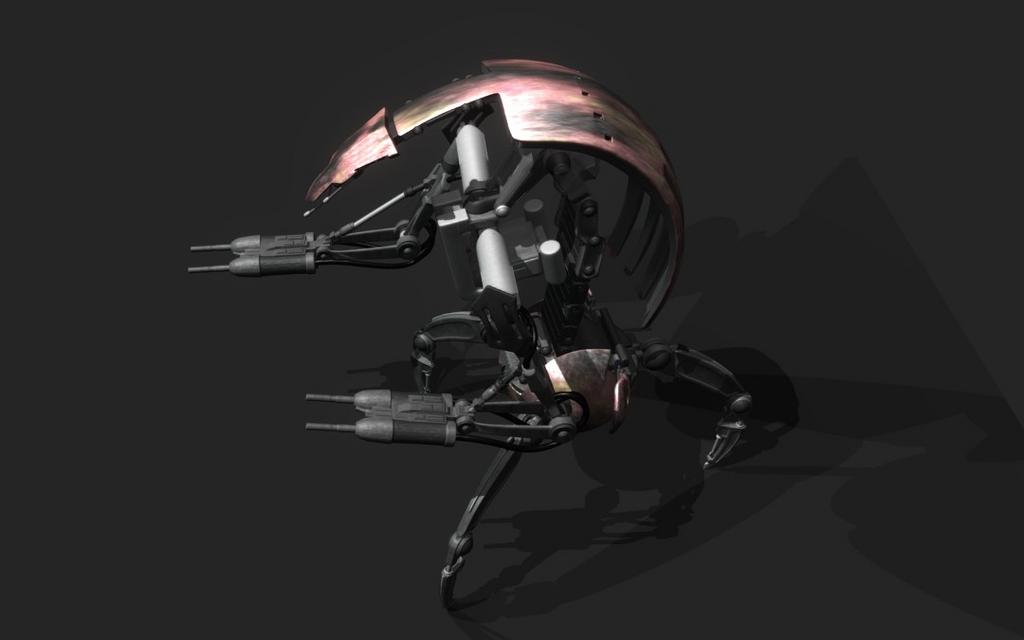 Do you think that this one, or the regular brown looks better?

The red’s better. Makes it look more interesting than the brown one.