I would like to have some critiques on these characters. I am not so much interested in the composition, because that is just a placeholder. I am more interested in critiques on the modeling, texturing, compositing, etc. The pose theire in is a part from a short dance animation, which i did as a rigging test. 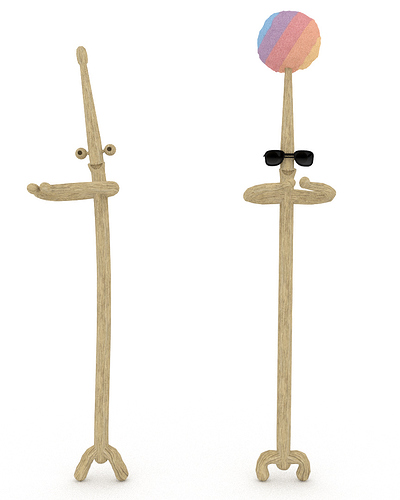 Too much wood grain.

Hi, I’m sitting here looking at my collection of about 25 different drum sticks that I’ve broken in the past 3 years. Are your sticks old or new? The older they are, the darker and grainier they get. But yours is very grainy and bright. The drum stick head thingy at the top could be a bit wider.

Everything else looks good enough to me.

Oh, and the upper tip definately needs to taper off a bit more.

You must have some muscle! I am drumming for about 3 years now and I have broken only one set of sticks!
My own sticks are pretty new, but I did not realy use them as a reference. My primary goal was to make it recognizable. have now tried to have les grain and made the thing on the head(wich is actually the tip of a timpani stick) a little bigger. I think that makes it better. Thanks for the critiques! Yeah, I wish I could leave it at that, but turns out it’s not because of muscle…

My one crash symbol looks like a shredded up hard taco shell.

They say a photo is worth one thousand words, but I’m not entirely convinced!

And, by the way, were you talking about the rainbow thing being a timpany marshmallow? I was talking about the actual stick on the left of the render. They always taper off at the end and have a bit of a wider neck. But anyway, the only kind of marshmallow I know anything about is the one right above my right foot (timpani is an amazing instrument though!)