I am completely dumbfounded on this. Can someone verify whether there is something wrong on a very basic level with the way my install is operating? 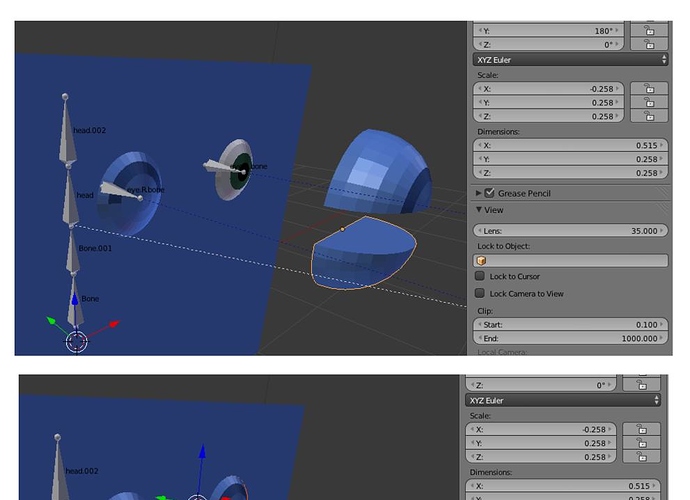 Note: The spine-looking armature is not parented to the cube at this point.

Image 1: I’ve duplicated the eyeball there (a perfect sphere), and scaled it up by 1.05. Cut it into a quarter sphere, changed colors, then duplicate that and rotated 180 degrees on the Y axis.

Image 3: I parent the eyelids to the cube.

Image 4: I select the cube, snap cursor back to center, then rotate on the z-axis. The eyeballs become acidic and begin to eat through their own eyelids, ha ha ha.

??? I can’t understand why the eyelids would have their own unique rotation after being parented to the cube. I’ve tried parenting them every way possible, including ctrl + shift + p.

Thanks on advance if anyone has ideas…

without the blend, not much ideas

Image 1: I’ve duplicated the eyeball there (a perfect sphere), and scaled it up by 1.05. Cut it into a quarter sphere, changed colors, then duplicate that and rotated 180 degrees on the Y axis.

Did you scale that duplicated eyeball in Object Mode or in Edit Mode ?
If you did in Object Mode, did you apply the scale ( CTRL+A -> Scale) before parenting ?

The subject line of this thread is a hint: Blender isn’t a CAD program so don’t treat it like one. You need to understand how object rotation and scale works as opposed to mesh rotation and scaling. Sanctuary is right that you probably need to apply the scale, but also the rotation. It’s all via the same menu, ctrl-A. If you simply scale or rotate something in object mode, you’re essentially enacting a multiplier on those values of the object, not actually altering the object itself. If you then layer onto that something like armature parenting, you have two different things trying to affect the visual orientation and shape of your mesh: the object transformations and the parenting relationship.

Thanks for the comments. I definitely need to step back and do some more tutorials on the modeling principles. I got too excited out of the gate. I see now some of the concepts I need a better grasp on. That said, and so that my little brain won’t go round and round in the meantime trying to think of other things I may not yet have tried, with attempts at stabbing randomly in the darkness of a large set of menu options and settings, I thought I’d post this other image. 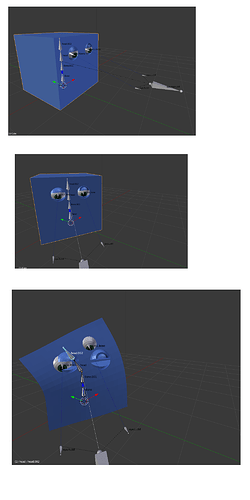 Image 1: The eyelid transforms (scale and rotation) have been applied with ctrl+A. The eyelids are set to parent the cube, using shift+ctrl+p.

Image 2: This allows them to keep the same plane as they have in relation to their original position on the cube. When the cube rotates on the Z, the eyes are “stuck” to it. The eyeballs are each parented to a vertice on the inside of the cube. They are damped tracked to the bones out front, with a main control bone parented to the armature inside the cube (spine-like thing). So when the cube is rotated on the Z axis, the whole rig and all rotate around, maintaining desired “neutral” positions.

Image 3: What’s cool about the eyeballs being “mounted” to a part of the mesh is that they get kind of tweaked and sucked-in looking when the armature (spine-thing) is contorted. Like jello cube guy. I’d like to have the eyelids do the same, but if I parent them to the vertices used as the eyeball parent, they try to maintain their original xyz orientation while pivoting around on that vertex. I’d like to keep them separate from the mesh and still simple to animate. For example, if the cube rotates and then they blink, it would be nice to just select them and then rotate on their X-axis. I’ve been monkeying with some eye and eyelid rigs that almost worked, but with complications, and some general clunkiness. I may give that a try again after some further reading, maybe there was an alt+a issue that threw things off.

Thought I’d post this in case someone with more experience sees an elegant and simple way of piecing it together. Thanks again!

I got too excited out of the gate.

That’s soooooo easy to do. Hope you find your pace soon.

parent the eyelids to the armature selecting the head bone and keep offset. That should get them to move around in sync better.

I parent my eyes the same way instead of parenting them to the cube parent them to an eye bone that is parented to the head bone. Looking at you example I think that is what you have already done.

Hey Tomtuko and anyone who responded to posts, the above is what I finished with. Thanks to anyone who offered some help. This was a good learning experience, for one thing, if you want a bone to basically act as a hinge, the proper constraint is, “Limit Track.” Tom, I ended up using the method you mentioned, but there are still some limitations to the way the rig handles various adjustments. For example, The eyes wind up in a more static position in relation to the cube’s mesh, and I was hoping to find a way to have them also track the mesh swelling up as well (so they might point inward or outward too). If I solve for that, I’ll post it here.

I should mention as well that most of the problems I was encountering were due to the ctrl+A issue. Thanks for mentioning that, Sanctuary.