this is one of my rare renderings where I was able to really go all the way (apart from the challenges of the weekend) and especially without giving up along the way because of unresolved technical issues (I tend to have eyes bigger than stomach).
All is done withe Eeevee and procedurals shaders (and I had a hard time with Clothe doing and redoing tests).

So, I would like to have your feedback and criticism on the points, which you think could be improved. 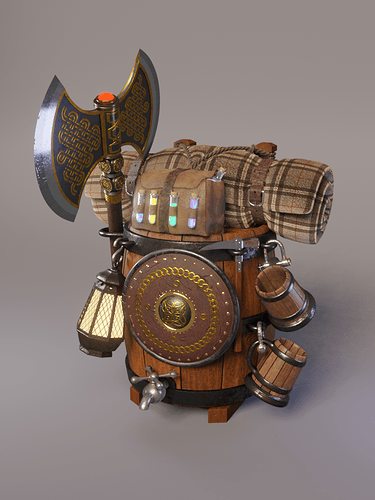 First, I have to say congratulations, because this piece doesn’t seem have any real mistake I can see. This would already be a rather good asset to be used in a production. So, everything I am going to say is going to be ways of going a step further rather than pointing out mistakes.

The first thing you could improve is presentation. Some of the metal parts look flat and gray, because they have nothing to reflect. You could use an HDRI to create better reflections or put the model into a scene if you have one.

Then, if you want to improve on the model itself, I would tell you to look at blending between multiple textures on the same material. Looking at the image, you seem to have used seamless textures for everything. While this works, there are ways to create more variations and push the texturing further.

If you plug 2 different textures into a mixRGB node, you can then create a mask that you paint by hand and use that as the factor, allowing you to decide where each texture appears on the model. Or, with the same principle, you could also use a mix shader and blend between 2 entire materials simply by painting a black and white mask.

What to do with that technique:
In real life, objects don’t get dirt and wear evenly. Corners and edges get scratched more than the rest. Iron rusts quicker on corners and on areas that get scratched. Dirt accumulates more in cracks and enclosed parts of objects, where it doesn’t get wiped off as easily. In your example, the barrel could have some dirt towards the bottom, where it often gets put on the ground and the scratches would be concentrated around the dangling objects, which rub against it constantly. The metallic objects would have more wear and rust near any sharp edge, because those spots are more likely to hit obstacles, and the parts that actively rub together would become polished and shiny. Maybe the lantern would have soot on its glass, especially near the top, close to where the smoke escapes. The leather belts would crack and peel at the edges and close to the holes (search for images of old leather belts).

Another detail that might be useful is to make the modeling a bit uneven and crooked on purpose. Make the wood planks have slightly different lengths, with very slightly crooked and diagonal tips. The thinner metal objects could have some bent parts and dents, especially the shield, which has probably been hit by weapons. Maybe the handle of the pickaxe is slightly uneven and lumpy, as it has been crafted by hand.

In the end, it all depends on what the story of the object is and how it has been used. And don’t hesitate to look at reference photos.

Thank you very much for this feedback.
I will try to modify it following your advice ^^

However, let’s also say that “this is an imaginative and well-done little guy(?).” With a battle axe, a blanket, a shield, a lamp, a water faucet and (especially) a ready supply of beer mugs, he should be ready for anything!

In this case, where the whole thing is “obviously fantasy,” to my way of thinking it really doesn’t matter so much whether the thing looks “weathered” or even too-much “real.” The joke is that this little guy has “packed everything he might think he would need.” (Especially beer-handling devices.)

The liquids seem off to me. Otherwise solid. Is this for the sketchfab competition?

@sundialsvc4
Thank you ^^
Yes, beer is absolutely essential for a dwarf worthy of the name

@Modron
Thank-you ^^
Indeed, I could add beer somewhere (dripping from the tap or at least from one of the mugs).

In fact, I started this image long before the announcement of the sektchfab contest.
But as it’s a work already started, I don’t know if I can but why not (if I manage to finish… and if I manage to make textures a little more cartoon style)

Oh wow, we only announced that contest a few hours ago

Well, it had the same effect on me ^^
So I’m going to try to redo a version for sketchfab.

Hey man, altogether i think it looks amazing! The only thing which looks a little off, is the lightning of the lantern. It looks like its lit, but it doesn’t cast that much light, other than that, perfect!

I’m not sure that it would actually work to have any liquid falling out of the steins. Really, I think that this project is basically finished. 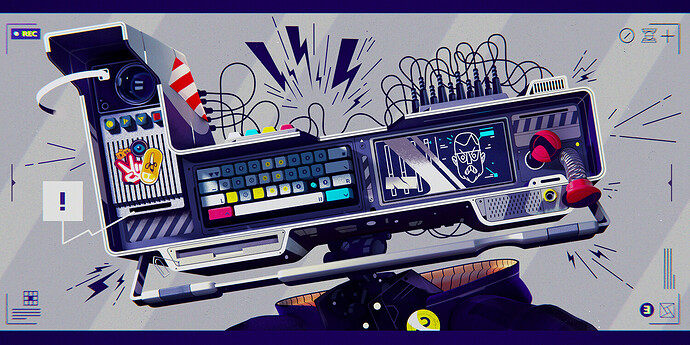 @sundialsvc4
The difficulty is also knowing when to stop, yes

@bartv
Wow, thank you so much

So, this is the sketchfab version, I tried to take into account your remarks :

You can really tell you put your all into this, the creativity, the style, and the all around QUALITY is just amazing! Perfectly encapsulates what it’s supposed to be with charm and style

Thank you very much, it really makes me happy and encourages me to continue

I learned a lot on this project even if it can be improved, it was a good school especially since I had to adapt it for sketchab ^^

I see you redesigned a lot of it. I especially like the leather parts, the texture is really convincing on the new version.

Thank you ^^
Yes indeed, I reworked the model as well as the textures