How can the opacity of the paint be controlled on a image textured plane? I want the paint to be opaque (no transparency).
Can someone please show the proper node setup?
below is my current setup: 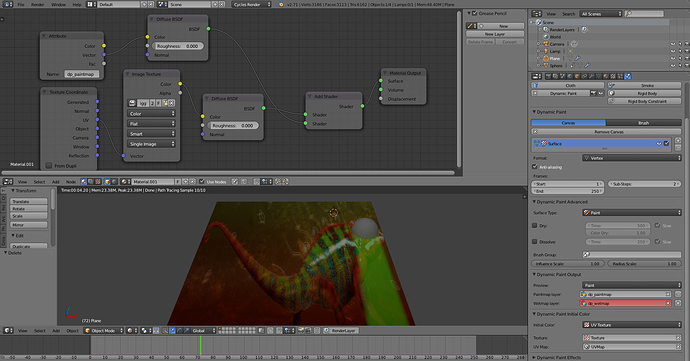 I think you would use the value of the paint map as a factor to mix between transparent and diffuse. I have not actually tried this, however… 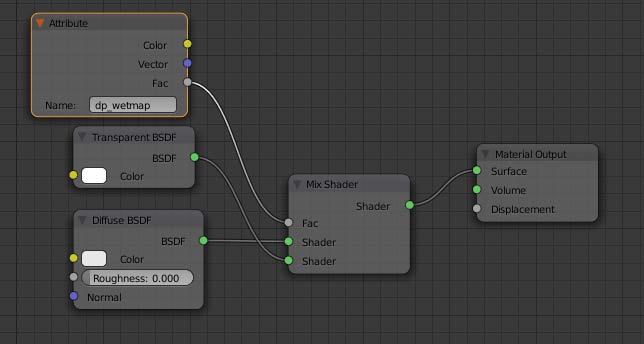 That does not do what I wanted. This is the result of the suggestion: it seems to have faded the plane’s image texture while not making the paint opaque.

140 views and no solution. I did not realise this was so difficult. It should not be. It would be nice if the alpha input on the brush dynamics would handle this.

Well, DP works 2 ways: vertex painting which is what is used in Cycles adding Attribute node like shown in Atom’s example or the second - baking image sequence which i would prefer in your case.
Baked images ( result is canvas texture image with Alpha - empty, erased part, where brush was touching plane) then can be used with whatever effect and animation you want in Compositor: if you need opaque color put a plane with Emission shader Strength 1 behind and that will be visible as opaque color where brush was doing DP.

For whatever reason DP Resolution can be set to square images only but since it is mapped back on the plane distortions should not be a problem.

Your last node example is incorrect - you’re using Add node instead of mixing image texture with RGB opaque, masked by DP, animation sequence: Color mix node - Image and RGB Color mixed by DP Attribute connected to Fac -> Diffuse or Emission (strength 1) that’s all what is needed.
Since you probably use not subdivided plane DP paints 4 vertices and there is almost nothing going on due to that. Subdivide plane up to the image resolution you need but that is heavy on PC.
To control DP connect Attribute to Emission Strength which is temporarily connected to Material output.

Thanks for your post expo, I got it working with your input.
I don’t know why you wrote “Since you probably use not subdivided plane DP paints 4 vertices and there is almost nothing going on due to that. Subdivide plane up to the image resolution you need but that is heavy on PC.” The paint is visible in both images above, just it not fully opaque.

Attribute node and name “dp_paintmap” in Cycles nodes means that it uses vertex paint layer to do “painting”. If i remember correct one was able to see it directly by switching to Vertex paint mode and choosing appropriate layer in Object Data tab Vertex Colors. As i see now it has been changed. No idea what about resolution then; it’s good if it works for you now.

For anyone wanting to avoid some frustrations that I had. Here is the node setup which I asked for in my initial post:

Here an example of the result: 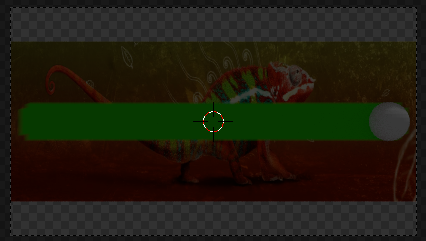