Yeah the Dithered Sobol generated noise pattern holds better detail at lower samples than Sobol. I haven’t tried the Intel denoiser yet but the optix ai denoiser addon by Remington graphics works better with Dithered Sobol than with Sobol and so does the Blender built in denoiser.

@bliblubli I’ve got a handful of guys beta testing my branch Filmer. They’ve all been getting awesome render times and are getting even better times now that I’ve added Dithered Sobol. Thank you very much for everything you’re teaching us in your Blender building course.

You sir are making it so incredibly easy for me to build, add to, tweak and modify Blender source.

The 2.7x build is also updated now. You can benefit from great speed, a new denoising method and lower noise on top of a very stable branch

Is this new denoise applied to the render or for the compositor , about to pull the trigger

It’s a node in the compositor, so you can mix it as you want, choose the intensity, etc.

I tested the Intel denoise node and It’s gorgeous for fast previews (and probably final renders too) in internal images. By itself already worth the investment!

For cartoon style it must indeed be awesome. You’re welcome to post some screenshots if you have any

The course now has a video to show how to add new libraries on windows (the OpenImageDenoise one in this case) and add the new denoising node. You can get it until Monday at a reduced price. And it’s really made easy, even if you never wrote code before.

Eevee is fast you said? A 20sec render done with the upcoming E-Cycles, using the new Intel denoiser node, much faster preprocessing time and now about 3x faster render thanks to new optimizations 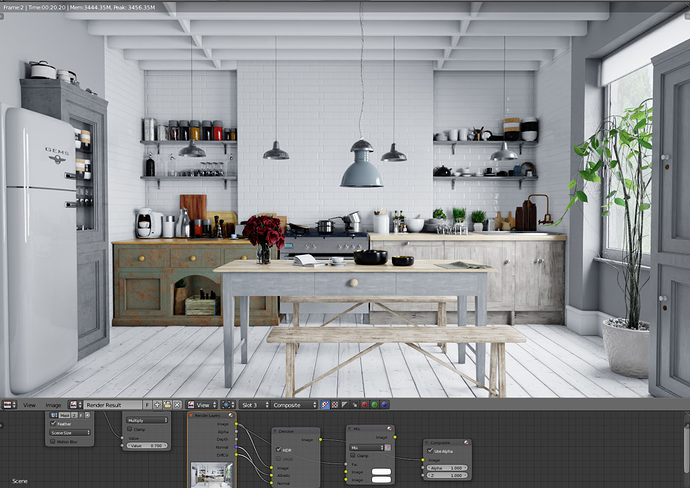 You can now get E-Cycles as monthly membership or perpetual + 1 year of support, and get:

Hi bliblubli,
is there any way to reach you via private message/email/discord? I couldn’t find an option on this site.

Have you no respect for people who just learned Eevee

Impressive, what resolution is this output ?

I’m working on it.

To be fair, this one looks very fake. You can see constant size ambient occlusion shadow across the whole scene. Yes, sure it is fast, but it’s not a quality level you can be competitive at unless you want to earn like $5/hour, since everyone these days is capable of doing average level archviz

I know it’s just some random Evermotion scene, but my point is it could be lit in a way which could turn $100 image into $1000 image. But that would probably not end up being just 2 minutes.

The general point I am making is that optimizations stop becoming relevant as soon as they start to introduce easily visible bias that is significantly detrimental to final quality and realism of lighting.

I suppose Evermotion guys use some fakes such as AO, or simplify bounces, and/or invisible fill lights. I’d first turn all the fakes off to truly see how your optimizations perform.

To be fair, this one looks very fake.

I didn’t notice anything. So I guess how fake it can look highly depends on the expectations of the client. For me and my work, there is no point in overdoing it to make it looks super realistic if it doesn’t have to - usually my own level of quality is set higher than what is expected of me - which leads to wasted time.

What does ambition have to do with the clients low budget?

What does that have to do with developing rendering technologies? If renderers were developed with the mentality of catering to low budget work, or in other words fastest performance regardless of quality, we all would still be using Blender Internal. Sure, it could not render photorealistic interior, heck, it did not even officially have GI, but boy could you render them fast on today’s hardware…

Here is the outline of the debate.

bliblubli is showing Cycles renders with very impressive rendertimes, but it’s also worth noting that those Cycles renders are set up in a way that compromises quality to such a degree the resulting photorealism is comparable to Eevee. So yes, you get rendertimes close to Eevee, but you also get quality much closer to Eevee.