I finally had a bit of time to look to it. May be of interest for @EntityDesigner too.
The high noise is due to 2 things. The curtain and the world shader. Half of the paths in this scene will be full black = no contribution because everything under the horizon is at strength 0. Also about the 4/6th of the windows are covered by the curtains, which prevents direct lightning. I made 2 renders at 256spp (instead of 1800) with those 2 points addressed (quickly, the lightning is of course changed). 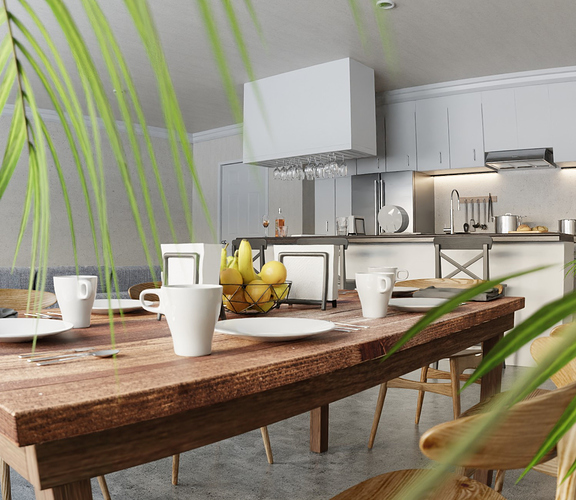 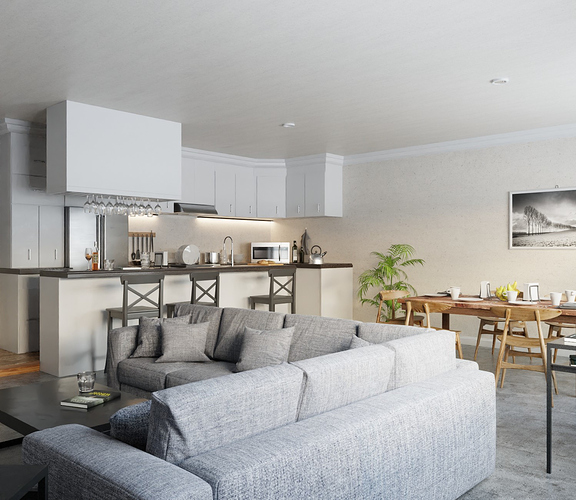 Thanks for your support, we have upgraded our CUDA version to the latest one and it runs perfectly! But the problem which throtle our render progress doesn’t come from the renderer, actually it was our config sets the render units to both CPUs and GPUs. We reconfigured it to GPUs render only and the render time has improved a lot! The render progress is approx. 2 times faster! Thanks for your awesome works!

Btw I also want to ask, does the spectrev2 mitigation really affect the rendering performance? If it does, how much will they affect?

Hi,
Just a message to make a big thank you for that.

I just take a subscription to test it and i’m blown away by the speed/quality ratio you can get from.

I usually use redshift in another software to make my renders(and will still use it) but with your work ,i see plenty of situations where this will not be needed anymore.

Hi,
I just tested on the July update and it works. Please provide a file and your spec by responding to your gumroad emails if bought on Gumroad or send a message through the Blendermarket help otherwise (right column on the E-Cycles product page).

Hey, thanks a lot. Being a big fan of Despicable Me, it makes me even happier, your testimonial is a real honor

I already have lot of Octane users switching to E-Cycles. With you coming from Redshift, E-Cycles starts to take it’s place among the big ones and the fastest render engines out there. You’re feedback is welcome to make the number of situations in which E-Cycles is the best choice always higher.

For VFX heavy stuffs like millions of particles and scenes using VDB or with a lot of scattering, i will still use redshift . But for simple object integrations in live plate, some interior rendering ,environment ,etc , your cycles version is an extremely good candidate. Making cycles useable for animated interior rendering is an accomplishment on his own

. I will test it on a real project soon , i’ll come back to you with feedbacks.

Thanks for the precision. I guess the scene you mention are done in other 3D packages? E-Cycles in it’s current state is limited by Blender’s own limitations, that maybe a downside of not being an external addon, but it also improves the integration and ensure compatibility.

While millions of particles work great in the renders I did, OpenVDB integration in Blender/Cycles/E-Cycles is still far behind other apps for sure. But maybe some good advances will be made in this direction soon

Yes it’s blender limitation, not really related to cycles(except stuffs like custom aov) . And yes it’s made on another soft (houdini). But as you said, the compatibility with other add-ons is a great plus for me when I don’t want to export on another package and use my blender library.

Rendering the new Chocofur Scene 8 on my 660 Nvidia ti crashes the newest version of 2.8. Temp goes up to 91 degrees celcius. I am going to blow the dust out of my computer with a leaf blower or a can of air. Maybe that will help some. Would E-Cycles help lower the temp. Right now I cannot afford E-Cycles or a new graphics card. I will download the newest graphics driver. What renderfarm do people suggest I use and what is the approximate cost? Can I set the renderfarm up so my graphics card is not being used? Thanks

I will try rendering initially with my cpu and open shading language. My CPU’s are at 74 degrees celcius constant. Wiill the temp remain constant thoughout the render? My render will take about 5 hours. I will now move this discussion to the rendering thread.Thanks

E-Cycles will most likely not prevent your GPU from coming under full load. Instead, it optimizes the render process in various ways for the GPU, ensuring that it is at full load for a somewhat shorter period of time.

To improve temps, I can only really recommend improving airflow within your case as much as possible. Get cool air to the component fans, and pump the hot air away from the computer.

If you are using a renderfarm, the entire rendering process is offloaded to an external server on the cloud. In other words, the only thing your computer will do is send your Blend file (or the BVH, depending on the service) to the service, and when the render is done, the service sends you the image of your render.
This goes for pretty much all renderfarms except those homebrew renderfarms, which really just amount to using all of your computers to render, rather than just the one you work on.
Some free renderfarms like Sheepit do the same thing, but instead of paying the company to run the service, you render other peoples’ images and vice versa.

Thank you lolwel21. For the time being I will render overnight on my CPU. Render times are about 5 hours. Can someone suggest a good video card for still renders. Here are my computer specs. Of course I would buy E-Cycles after the new video card. 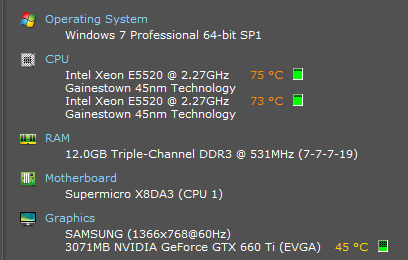 My computer is 8-core. It is 10 years old.The temp is high because I am rendering with the CPU. The video card overheats. 91 degrees celcius and shuts blender down.

Hi,
regarding overheating, everything @lolwel21 said you can also try to undervolt with msi afterburner. E-Cycles will actually make your card slightly hotter as it better uses all the transistors in it, but for a shorter period, so the overall power usage will be much better. For the video card, it depends on your budget. The best one is the 2080Ti at the moment. The 2070 has the best perf/price ratio I know. The 1660Ti/980Ti have about the same speed and memory size and are found at 230€/190€. For more details, there is a good benchmark from @TiborNyers_BC here http://boostclock.com/show/000257/gpu-rendering-nv-blender-cycles-maxwell-pascal-turing.html. You can see here that a 980Ti + E-Cycles (less than 300 bucks) can be faster than a 2080TI (more than 1000 bucks).

What about topics like Photon GI Cache?
Is it possible to include this technique?

The big archviz Render Like vray and Corona are already working with it. Luxcore can do it now too

I already worked on some GI cache techniques, but with master still breaking regularly despite the official UI/API froze, the bugs that keep being added, etc. I’m slowed down quit a lot like many other addon developer that spend more time than they would like on keeping up to date with the changing code base.

The last test I made gave much faster rendering and noise levels requiring up to 8x less samples for comparable noise levels, but glass was not working properly. It landed on the to do list and everyday work made the rest

So it stayed in the same state since 4 months now. It’s in the pipes.

The last test I made gave much faster rendering and noise levels requiring up to 8x less samples for comparable noise levels, but glass was not working properly. It landed on the to do list and everyday work made the rest

So it stayed in the same state since 4 months now. It’s in the pipes.

I have a dream. Wedding of e-cycles and luxcore ;)))