Just been trying this, w/ mixed results. did a test animation on one of my files, came out pretty good and fast, was a trial so i didn’t time anything exactly. however, one of my other files is crashing. i moved all my files onto my Win 10 machine and initially though that was the issue, but restesting on my Win7 machine seems to confirm it’s file-related but i don’t know why:

don’t know the significance of OpenEXR, i’m asking to render as PNG
this crash happens again after 2 tiles (of 60), and Blender just locks up - i can click around various tabs but it hangs when i try to close and had to use Task Manager.

You can test on the official buildbots first to see if it comes from this build or not. I know the programmer of this build. He says he will have a look to it if it’s only happening with this build.

got better things to do, to be honest, i don’t have the time to bug hunt something i know nothing about and i wouldn’t know where to start sensibly - i’ve already looked over some of the material nodes to see if i messed something up, and removed a couple of them to see if i could narrow down if one in particular was causing the problem, but i’m getting nowhere.

Hi Wolfie,
send me your file per Email if you want and I’ll have a look to it.

it’s massive, about 180mb w/ the packed files etc etc, however i’ve just done a quick test - i deleted everything, added a cube and camera, and the crash still happens, so could it be something in the file itself rather than an object or material? Rendered View still works fine, but hitting F12 gives this: 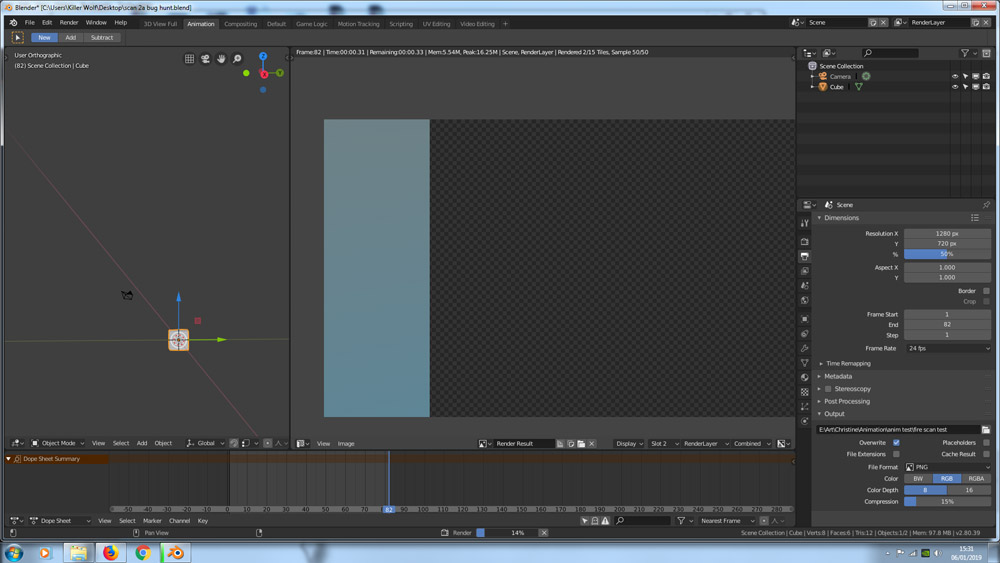 i was going to put this cut-down file in pasteall but it’s giving some weird “User armadillica already has more than ‘max_user_connections’ active connections” error :-/ if you want it, PM me your email ~ it’s only 3.5mb

You can send an email by responding to one of the gumroad emails. If you send it now, I’ll have a look tonight.
I think with 3.5mb, you can even attach it here or in a pm.

Fixed. Was due to the old option “save buffers”. If anyone needs it, I can bring it back, but then auto tile size has to be deactivated when using it.

The new version is already available, with all the latest improvements.

thanks for the fast work! I’ll give it a try when i get home tonight.

i want to try something a bit more complex, using my fire scenes but apparently 2.8 needs to have all that stuff baked first so i’ll have to look into that, might have to wait until the weekend ~ i’ve done nothing in 2.8 so far but load it up so i could use E-Cycles.

Good to know the RTX version is now working properly on older cards. @Komposthaufen can you confirm with your GTX 980? If it’s the case for you also, I’ll move everyone officially to the _RTX version.

The machine i’m doing my rendering on is a Win10 using a GTX970, i’ll try this as well. The difference for the 980 was only a few seconds, but given i need to render over 1400 frames i’ll probably stick w/ the 9xx version of E-Cycles after i’ve tested, it might seem trifling but all those extra seconds will add up. Might be something for you to consider about code optimisation for bot RTX and 9xx, as I would expect many others will be wanting E-Cycles for animation rendering rather than one-off images.
cheers

Of course, I’m also happy about each second I can get off rendering time. But with what is coming next month (one new feature every month), many people will get 20% faster rendering on top of the existing speedup. So by having to make only one build for all, I can invest the time in much bigger improvements. And in the meantime as you said, you can always use the 9xx build anyway.

i’ve just seen 2.8 can apparently do CPU+GPU combined, does E-Cycles take advantage of this feature? Don’t think i’d try it for my animation just in case i overcooked my CPU lol but i might try a few tests to see what the speed’s like.

yes, it supports CPU+GPU, but your CPU must be really fast compared to your gpu to see any benefit. I’m always interested in comparison between GPU+auto tile size vs GPU+CPU with whatever tile size you like. (specify the cpu and gpu type and clock if changed)

so yeah, the RTX version works fine on this GTX970 too.

Great. The speedup with CPU is in the range I got from other users until now, around 10%. Compared to a doubling in power usage, it’s low, but if you are on a deadline, it helps.

A thing I noticed is that the frequency of the CPU core managing the card has an important impact on the GPU perf. As most cpu overclock (boost) when only 1 thread is used, it may also be a factor. So if you are to buy a new computer, it may make sens to buy a CPU with a low core count but a high frequency. It would also help when using Blender itself, as most operators and modifiers don’t use multi-threading much yet. If the pre-processing phase is the biggest part (building BVH, etc.), a high core count is then more important.

Unfortunately I don’t get any speedups with the new RTX build in my test scene.
Even worse, this build is very unstable. I tried to render this scene 5 times, and only two times he was able to finish the render, the other times blender just closed itself at about 50% progress.
The render time was about 31:02.35 for both successful renders.

ok, it’s not very logical at first that the 970 are ok and the 980 get such an impact from newer Cuda SDK. But then I’ll continue to provide cuda 9 kernels for 9xx cards.

i’ll chip in here and say i had a couple of closures on my 970 too. i’m rendering a different scene now, one w/ fire/smoke sims in so maybe that’s a place to start looking ~ i’ve rendered about 200 frames on the scenes previous to this, both w/out fire sims, so this may logically be the culprit. however, i’ve asked elsewhere on this site about 2.8 fire sims and my baked data was misplaced;

Is the fire baking a bit dodgy in 2.8? Or do you just have to rebake it? I’ve got a fire sim from 2.79, baked all the physics and it’s fine, but when i open it in 2.8 (i wanted to test E-Cycles) the fire and smoke trails are there, but they’re not in the right place - higher and further across than in 2.79. hard to tell other details as there’s bit grey circles obscuring things :-/ [fire]


so maybe this is a contributing factor?

Didn’t have time to look into it, but i’ll try and give it a run on the 980 tonight and run it via CMD so i can see any error messages.
cheers

I did some more tests and got some interesting results.
Since the first measurements on Dec 31, I’ve updated my graphics card drivers and now the render time increased for the Scene. It went up from 25:13.23 to now 28:54.86. the new RTX build is at 31:26.29.
I always do multiple measurements to ensure that the results are correct, but now I cannot recreate the 25:13.23 anymore.