I have been playing with planets trying to get a good photo-real one.

My biggest problem has been the atmosphere. I have tried halos, but they disappear halfway out of the fame. You could use a tube primitive, but that would have to be somehow tracked to the camera if you wanted to move. I found another way. It may be no better then the others, but have a look.

However, I made some modifications… Here are my test results.

First, I consolidated the image maps so there are only two: ground (with alpha channel) and cloud (no alpha, needed one). I used the largest possible maps I could find. The only procedural is stucci with its size set to zero just like in the above mentioned tutorial.

The only light source is one sun lamp set slightly yellow (very slightly).
I also have the same sphere setup in the same order. Then only difference here is that I added a fourth sphere for the “fuzzy” atmosphere instead of the tube primitive.

Most of the materials are similar. I did add a color ramp to the surface to accent the fresnel effect of the atmosphere. The alpha on the clouds is also not zero. This is because I told blender to calculate the alpha as I did not have an alpha map for the clouds. The raised alpha effectively “sharpens” the clouds. This in conjunction with the “Mitch” OSA setting and the sharpen node seems to reveal enough cloud detail to make it more believable.

The last fourth sphere is just for the fuzzy atmos. Because of the render layers feature and the nodes, I can screen it on over the normal earth model. The way that the color band is set up the gradient appears to fade off into black. But, because I had to shift the colors right to make room for the black falloff, the fourth sphere has to be set considerably bigger then the other three. The screen makes it so any ships, stars, nebula, etc, can show through a little bit.

All this makes it possible to almost (yes, almost) fly down into the atmosphere. It also is always oriented in the right direction because the material is still light and camera dependant.

If any of you come up with any better ideas I would love to hear them. I think until blender’s volumetrics are fully developed we will have to find shortcuts like this. However, even full volumetrics will have their drawbacks – very long render times. This setup is ok about render times (21.67 sec. for NTSC no vector blur on a decant system).

I will upload the .blend file as soon as I figure out how/where to do so. 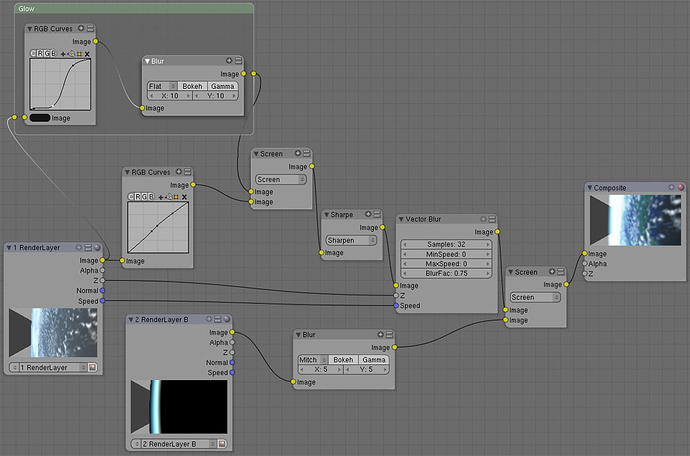 Here is the .blend file

i really need to learn how to use the composite nodes

KevinW: this is brilliant, thank you

Of course, thanks to Enrico Valenza also

This is a really nice method! You should do your very own tutorial on this. In
my opionion EnV tut is great, but it has it’s drawbacks (for instance, it’s not
an entire sphere).

Give it a try. No need to hold back because there already is a tutorial out there.
Always good to have new fresh angles at things…
//Mathias

Wow. Thats really cool. I just downloaded the blend file, and I must say, I really like it. Absolutely increadible renders, and the their quick too. I’ll be applying this method to my future planets.

cool! you definitely should write a tut. i’m making an earth-like planet with material nodes…!

Very impressive. I have been working on planets as well and will need to try doing this on mine.

if you should make your own tutorial about this, then it can be hosted @ made2destroy.net as a video tut or as a website/flash/PDF tut!

Just fyi, I have started making a tutorial for this. Might take a little longer because of college but I wont let that stop me.

[edit] its done, scroll down.

Haha, I just read it and since I’ve only been working on Blender for 2 months I don’t know what nodes are or anything. In any case I’ll look it up and then practice using them until I find out what you meant by everthing in the above but I must say that is one of the most realistic looking fake planets I have ever seen. I’ll see if I can trick my dad into thinking that I got if from NASA’s site or something. Thanks!

Amazing, this is the best atmosphere technique I’ve seen.
And scales beautifuly.
/me waits for tutorial…

Yeah, well I did make a tut, but they did not accept it here on BlenderArtists and no one told me why.
I also have no place big enough to host it

How big is the file? try mediafire.com

Compression is a wonderful thing

Sweet! Thanks again Kevin - your the bomb!

Uh. Am I the only one that gets a blank page after following this link?