Hey all.
Im animating the scale of an object by “Key->Bake Sound to F-Curves”. I can’t edit the generated f-curve. Why?

Just what I needed, thanks.

(BTW, that script only generators the z scale curve for some reason)

Added unbake.py to \scripts\addons
Enabled addon in user preferences animation.
Baked a sound curve to the Cube X Location channel.
In 3D view tools, scrolled down to [unBake to Action] button.
With the x location channel selected, i pressed the button.

The F-Curve now had keyframes.

So for me it worked as expected.

Hey all.
Im animating the scale of an object by “Key->Bake Sound to F-Curves”. I can’t edit the generated f-curve. Why?

I’m getting close to releasing a new version of speaker tools. The idea is to simplify the process of animating to sound and minimize the need to bake.

Basically, Sound fcurves are baked onto a custom property(ies) on the speaker object.

The range of the fcurves are modified using an envelope and fcurve modifiers.

The image shows an mp3 baked to 16 frequencies.
One visualiser panel shows an action normalised to its action. ie the maximum frequency goes from 0 to 1, the rest go 0 to what fraction of the maximum.

The inset shows the action normalised to each channel, ie they all go 0 to 1. Choosing None gives the raw bake.

The range can be changed with the sliders.
The action can be quickly copied to another channel with a different range.
The range can also be adjusted at output level in the driver using fcurve mods there.

The burner cone is driven by channel 1 of the action. Pressing the button bakes the driver.

Note: I took the inset screen shot at a different frame, hence the values don’t appear to match. 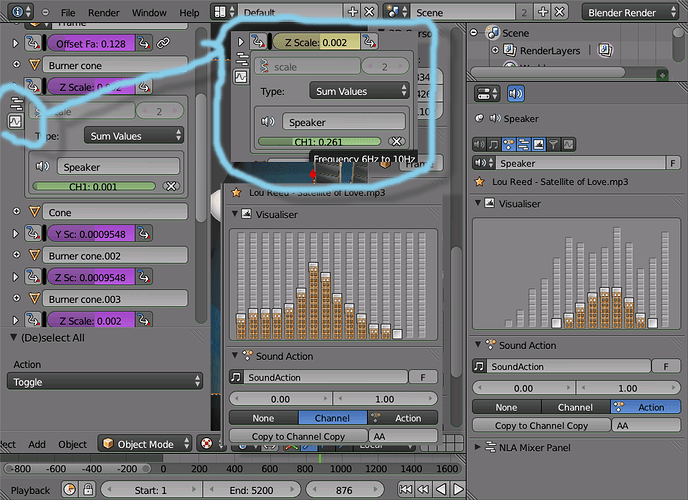 Hi, noob question here…
I Baked Sound to Keyframes and I found the script (the python code)…
Can someone tell me how to run the script?
I know this is really basic - I pasted the code into the Python Editor panel but can’t figure out how to launch it…

I used the Text Editor too… ALT P to run script…