A work currently under design, the visualization and design are simultaneously and interactively in progress (no a rendering of someone else’s design).
This is my first work with 2.8 Eevee and I am very happy with interface and usability of the beta release. I believe that 2.8 is a HUGE improvement of interface, organizing desktop and tools. Eevee is a killer, for archviz work, with it’s blinding speed advantage, the one big question was quality and how easy to setup.

I was hesitant with both at first and frustrated with first results. Gratitude for the tutorials “Definitely Eevee” by Chipp Walters and by Chocofur, in more concentrated context and many more here in the forum and elsewhere.
Lightbleed, hdri problems ARE curable to a large extent! Irradiance volumes and reflection maps are easier to handle than I thought at first! (Blender 2.8 defaults suck for archviz)
Project is missing plenty detail, but lighting and design outline are there, needs filling.
So here it is: 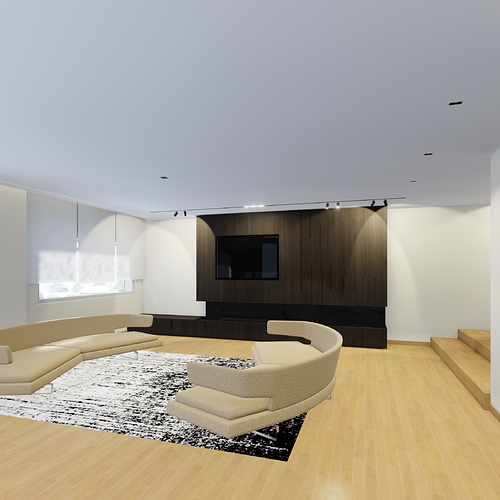 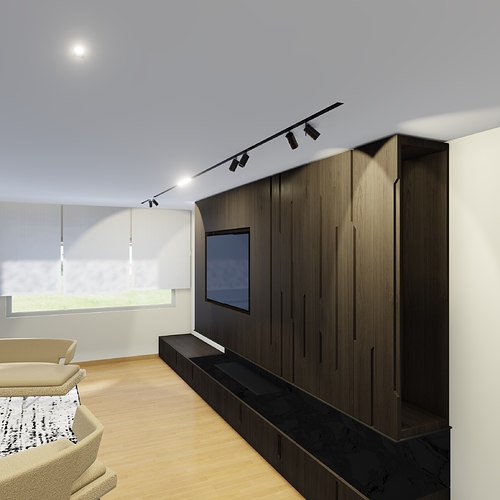 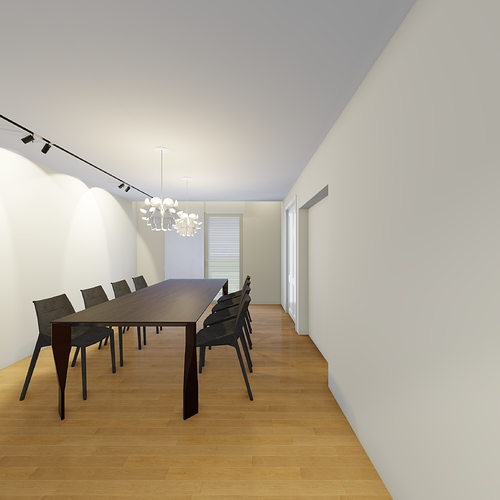 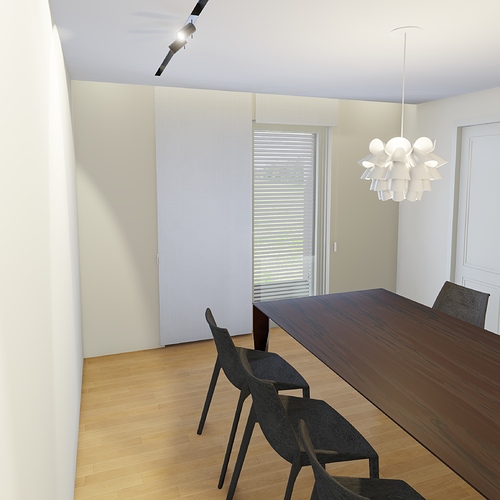 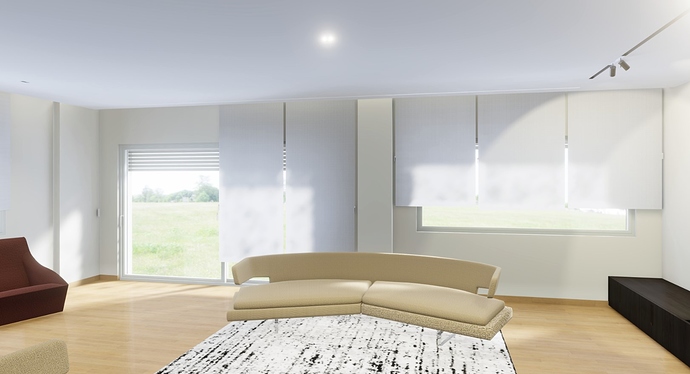 And I am happy having found and adapted a workflow for producing 360d panoramas from Eevee.
Thanks to UnitedFilmDom team, for their excellent tutorial and blender files rig.
A few minutes for 42.5 Megapixel VR panorama!!
The following image has no post processing, raw from render. (Is reduced for site upload) 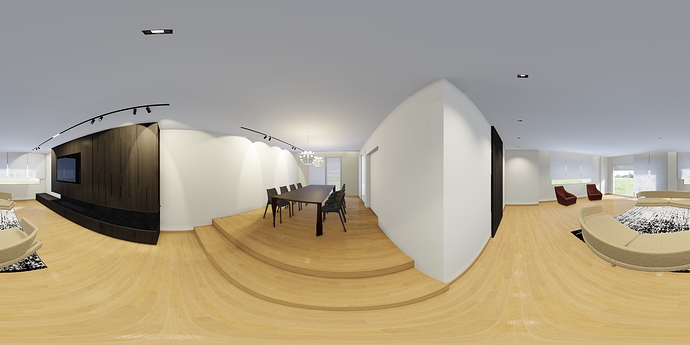 Click to view with Google 360 viewer, in full resolution

There are slightly visible seams, as the 360 is made of Cube of 6 X 90d FOV cameras.

Nice one on the 360 dgr. camera setup, will save that link

I have to say your renders are quite flat. There’s not a lot of contact shadow on things like chairs (something that a AO render could solve a bit), and contrast could be tweaked a bit as well.
Other than that the room is quite empty, rooms are never this empty

Hey glad my tutorial could help. Thanks for your amendments, as i mentioned i was improvising the whole thing, so was untested, and rushed so very sorry if any of those issue caused you difficulty. Regarding the visible seams, have you tried adding subdiv and smooth shading to the projection cube ? Once its spherical there should be no more seams, although you may get some misalignment between cameras but thats currently unavoidable.

@RobWu
Thank you.
Yes, it is empty. Consider it an outline for things to come!

@unitedfilmdom
Great help!. Not sure if beveling cube edges will do anything at all, considering the materials are emitters (no shades, no ao).
I believe, the issue is that intrinsically lighting in Eevee is to some extent screenspace based, so the different orientations of cameras cause lighting differences, that show up as in-continuity (even without the screenspace post effects like bloom, etc)
This is commonplace also with real world photography stitching, which deal with the different exposures between orientations, to generate panoramas. In response software (like Hugin or others, some built-in cameras like the Ricoh Theta) have built in the algorithms to even out the different exposures and blend at the seams.

Ok, well Ive been working with greasepencil and eevee, for a fulldome film, and turning the cube into a sphere, it helped the seams massively.

and turning the cube into a sphere,

Oh!! Very interesting.
You still use a 6 camera rig? (What FOV?)
And what kinda projection do you use to unwrap?

I still use the 6 cameras and add cam rotation during projection. and the camera at projectionstage is a 180 fisheye equidistant.

One idea is to stitch in external program like Hugin

I worked on this idea #1

I stuck with six camera rig and increased the FOV of each from 90 degrees to 96d, so that the shots overlap in the perimeter, about 15% (in the following example each shot is 2300 pixels and the overlap is 150 on each side —> the resulting panorama is 8000X4000 equirectangular)
Then I fed the set to Hugin’s Panotools, inputed the cubemap coordinates in PanoTools format (yaw, pitch) and gave the overlap corners for control points.
This is saved as a .pto project file so you can rerun the set with new Eevee outputs with one click!

Hugin software, not only removes seams but does a clearly better job at preserving edges near the edges of the individual photos where pixels are stretched.
And no geometric distortion. (other than lens curvature, lines are perfectly aligned)

Seeing how good a job Hugin does at normalizing the exposures and blending the overlap areas, I decided to re-introduce post effects, namely bloom into the individual shots and try to compose those into equirectangular. The result speaks for itself: no seams.
Image 3: Input 6 cam rig from Eevee, with Bloom + Hugin
for comparison view the same Eevee source images, with Bloom, rendered as an unwrapped cubemap with Cycles, that’s how bad it was before!
Image 4: @unitedfilmdom 's Cycles rig, original 6-pack from Eevee with bloom
Side-by-side of the cubemap corner in detail below

Worked on detailing the project. Still not finished, but getting there.
In the process I made many-many lighting tests and renders to check on the result and design variations.
Eevee was fast and I am getting to know the process much better. 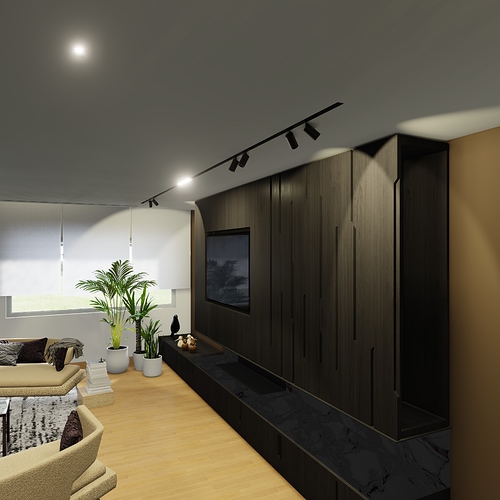 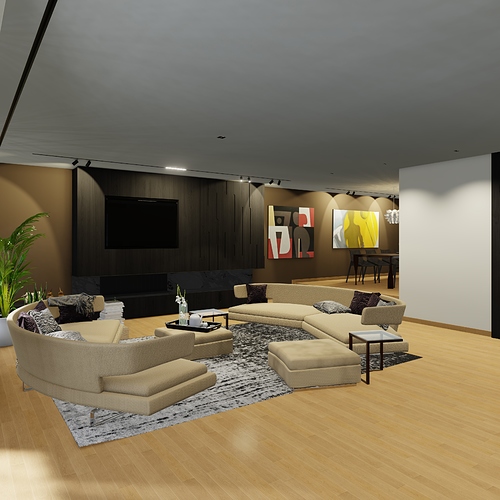 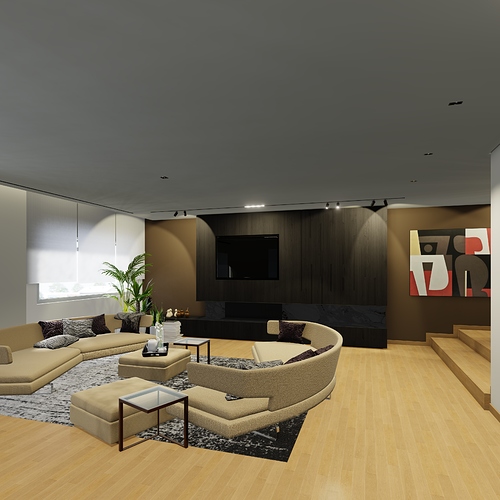 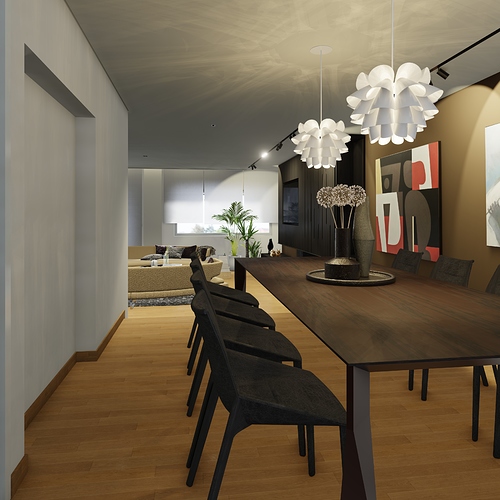 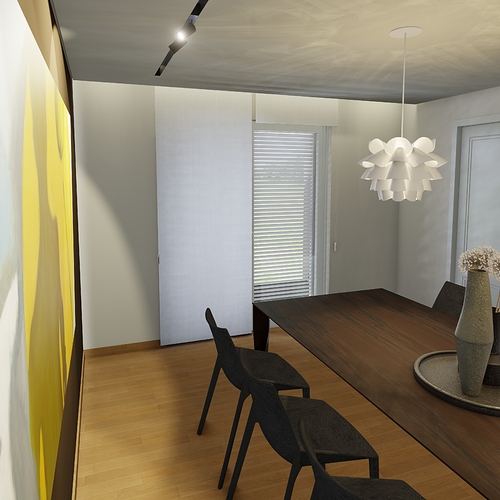