Eevee renders faster with multiple sessions open on the same PC | Can't it be a feature!?

EDIT:
@DShot92 has shared a script that accomplish the case presented bellow:

Eevee renders faster with multiple sessions open on the same PC | Can't it be a feature!? Blender Development Discussion

Hello everyone, i actually use a script for myself that does this excact thing. Render with multiple instances [image] You need to render to image sequence (.mp4 will not work). Make sure to: uncheck Overwrite check Placeholders [image] On the N panel you can choose a frame range and if the render should start automatically or no. New blender instances will be launched so they will use current save state of your work. It works on linux and windows, i have no clue on macos. Create Re…

Hello friends!
In my current project, I noticed a peculiar thing.

Let’s say we have just one workstation with 64Gb of main ram, a GPU that has 12Gb of ram and one animation to render with the following specifications:

Now, what surprised me, to begin with, was the very low resources I was using to render it. Most of the PC wasn’t doing much and didn’t feel particularly tired.

So I experimented with opening a second Blender with the very same file loaded.

Was expecting a major slow down in both Blenders…
But such did not happen, it kept rendering each session at 30 seconds by frame! So I had just reduced the rendering times to half.

What do we do when such a thing happens!? We open a 3rd Blender of course!

And guess what, because it still has available video ram 4*3 is effectively 12Gb… it kept rendering all 3 sessions at 30 seconds by frame!
I’ve therefore reduced to 1/3 my animation render time!

Now the obvious question is:
Wouldn’t be possible to automate this in the same blender session, like using some kind of virtual sessions, so that instead of taking 30 seconds by frame it would take only 10 seconds by frame?
This would use the same video ram, the full potential of the graphic card, but would save the CPU ram of the need of having 3 Blender windows open.

As long there’s free memory why doesn’t Eevee load more than one frame at a time on an animation!? Seems that it could load 3 just fine in my case!

Wouldn’t be possible to automate this 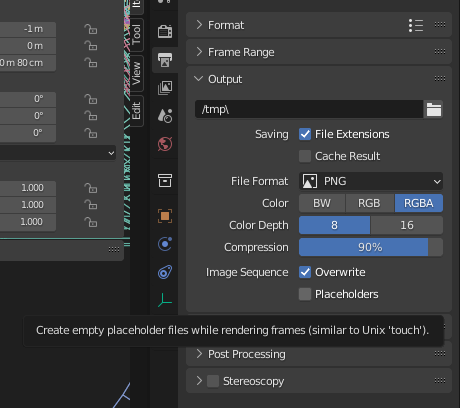 Manual even references this as “primitive renderfarm”:

Hummm! Thanks! But ain’t this for multiple machines!?
I’m using the very same workstation, just with 3 Blender open at the same time on it.
… My description wasn’t clear, sorry! I’ve improved it a bit now!

I’m using the very same workstation, just with 3 Blender open at the same time on it.

You can also use that with multiple Blender instances on the same machine as long as they all point to the directory where your files / placeholders are.

Blender does NOT lock a blend file within the OS, so a accidental file save with a change on one of the many machines will be possible. ‘Normally’ a app and OS will lock the file, so accidental changes cannot happen when a file is opened twice or more.

Thanks for the feedback!
But what surprised me the most was really the fact I could render things 3 times faster on the same computer

So… why not use all that PC power on the original file!?

But couldn’t it process 3 (or more) frames at the same time, as long there’s memory available?

It is a interesting find indeed.
With CPU rendering, Blender would use all available cores and RAM if possible, so a second Blender would be dog slow to render.
Not sure how Eevee is dealing with this on GPU level, but it looks like the VRAM and GPU rendering has ‘room to spare’ to render all three at once on the GPU.

Yeah, seems that it’s exactly that!

As long it has Vram it will render…
…but why has the graphic card room for processing all 3 and keeping the same render speed!?
This means that the graphic card (in my case an Nvidia RTX 3060) has a lot of parallel processing power that ain’t be used

By the way, all this is going to be fixed in Eevee Next. It’s a known thing that Eevee doesn’t fully utilize the GPU or multi-threading, hence the rewrite they’re working on

Yeah, the current Eevee is more of a minimal viable product than a final version. Don’t get me wrong, it’s incredible, I’m a huge fan of Eevee. It just has never officially been “finished”. I don’t remember the whole story of why Eevee took a back seat to geometry nodes, other than “everything nodes” is a huge priority for the foundation, but luckily Eevee Next is being actively worked on right now

Eevee wastes a lot of resources and this has been discussed before as well as running multiple instances of Blender to get around this problem. It should be done in some dirty way before Eevee Next to be able to run multiple rendering instances within Blender project with a single click. I think it should be fairly easy to do such an addon. Unfortunately I am not a coder.

I would definitely use such an add-on

For Eevee Next for PC you will have to wait for a very long time. Mac users are probably in a slightly better situation, because Apple is involved in Blender Cycles/Eevee development. Anyway in a meantime multiple instances rendering should be build into current Blender version.

AFAIK, EEVEE never took a backseat, it just that bugfixing issues like the OP mentioned requires a full rewrite, due to the nature of GPU rendering itself. Also fixing and/or adding certain features will require some modern GPU’s, and thus, EEVEE next will not be limited to openGL 3.x anymore. Also notice that no render engine of any kind will ever be a finished work, since research is ongoing for several features people want/needs for production use.

GeoNodes, by their nature, is orders of magnitude easier to code than a physically based GPU render engine, so it’s not surprising that more developers are on board on this project. Render engines (GPU or not) requires certain knowledge of math, physics, optics and image processing that not every developer has, and for GPU rendering, also requires quite a lot of knowledge of GPU tech, and it’s limitations. That’s probably why there’s only one developer working on EEVEE.

Yeah! There are a lot of people that have old hardware (me included a few months ago

), so there’s always that need to balance features with compatibility!

It is a interesting find indeed.

Do I Open MyProject1.blend AGAIN? (and again)?

EDIT: O, and do I render all of them at the same time… or just MyProject1.blend.

Hey there!
Let me see if I can clarify

Let’s say that “MyProject1.blend” is an animation with 1000 frames.

And that’s it! Enjoy a 4 times faster render!

By the way, no need to set different frame ranges in the different Blender instances. At least I assume thats what Format64 was talking about above. Just uncheck Overwrite and check Placeholder. That way before a frame starts rendering, the (empty) output image is created. Once rendering completes, the (finished) rendered frame replaces the empty file. Since Overwrite isn’t activated, the other Blender instances will skip each frame that’s already being rendered by another instance.

I’ve used it before for one of the companies I worked for.
We rendered in a render farm of 6 computers if I remember correctly, and that would do exactly what you describe… the thing is that if one frame fails, you’ll then have an empty image file.

We had a lot of frames failing, so we often ended up with a lot of empty files that we had to delete by hand

That’s why I don’t enjoy that option very much!