In honor of Halloween I made this piece. Creative criticism is welcome. It’s my first real attempt at a finished project. I’ve been trying to learn blender for a little over six months now and this is my culmination. This is just a first draft, and I already have a few changes in mind, but I’d like to get some feedback. Created with Blender and Gimp (for touchups). Looks well made. There are some issues however:

I love the teddy and the concept btw. Happy halloween

Been playing around a bit with postpro lately, and took myself the freedom to play around with your pic. Here’s what it turned out into 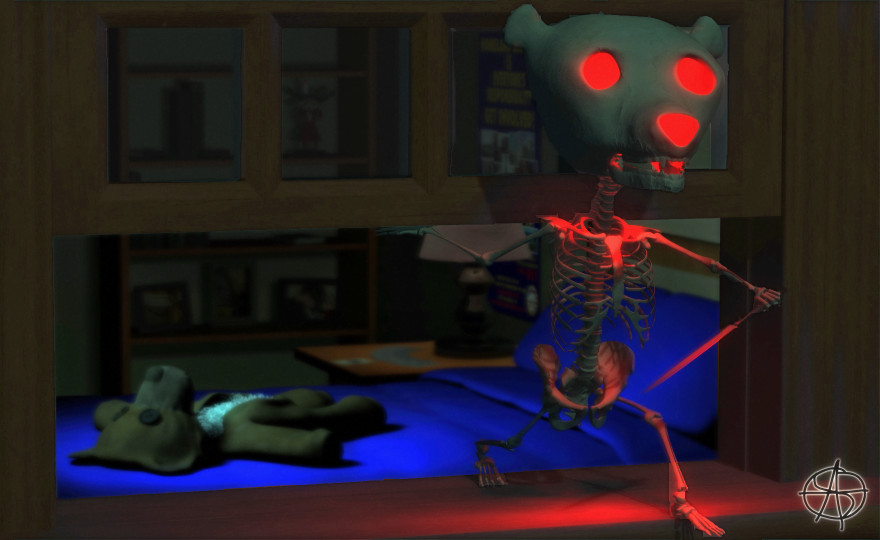 I completely agree with your comments on the focus. The text was something I added last minute. I was trying to only have two focuses, the skull as primary and the bear as secondary.

The skeleton body is from a human skeleton that I modeled previously. It was one of the first projects I ever worked on. It came out okay, but there are a few non-manifold verts, which I didn’t understand when I modeled it. I just used some of the pieces that came out alright from that (spine, hips, shoulders) and modeled the rest anew. I struck a compromise after looking at real bear skulls, as they have huge holes in the sides of their skull. I decided to make it look “real-ish,” as it’s a hybrid bear/human like a teddy bear. It’s really that distracting? I then fit the skeleton inside the bear and changed the proportions accordingly.

I wanted to keep the scene fairly dark, as it fits the subject matter. I do see what you’re saying in terms of contrast. The post pro shot definitely leads me in a better direction. Thanks for the criticism!

I really like the concept behind this. It reminds me of that Calvin and Hobbes cartoon where Calvin jumps out of his skin as a skeleton, except with a much more sinister twist to it. My main advice would be to give the bear a more dynamic pose. There’s no twist in his hips or shoulders, his spine seems to be perfectly straight along the Y-axis, etc. Perhaps it could stand to be a little less pencil-straight.

I think the skull looks like it doesnt belong on that because:
-It’s Huge and Heavy compared to the tiny and weak bones of that body.
-It doesn’t resemble any realistic skull. It even has “ears” modeled. The body however is very more realistic and resembles a human body.

I’d suggest making the body-bones (except for hip) quite a lot thicker, and at least simplify the rib cage/spine, maybe feet/hands as well. I think deforming the hip bone would aso do a great deal to empazise that it isnt a human skeleton.

I just posted the next version. Please see the first post.
I think this gives more justice to my original intention.
Thanks again for the criticism!

Any other critics wish to take a shot?