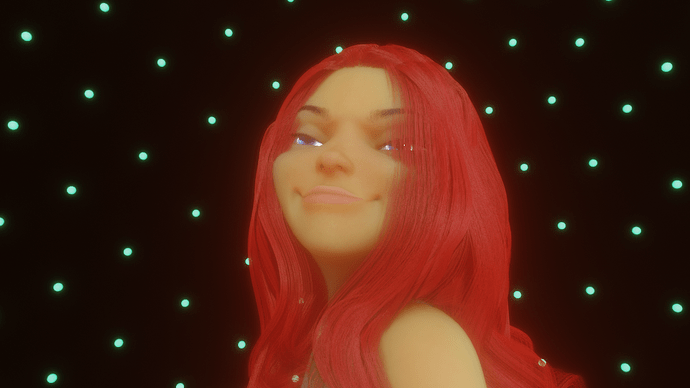 here is Emily, a character i use to work on and off in my spare time. I more or less used this character to learn Blender and even tho this character seem to developed pretty far, there are still things to improve. I will post any improvements and tests here.

I use a heavily modified rigify rig but after some animation tests i probably build my own as rigify has become very old in terms of features and quality. The cloth are made in MD but this is just tempary measure as i plan to do anything within Blender. The hair uses the new cloth physics, which are really great and quick to setup. Right now i’m struggling with Eeeve Motion Blur as you can see in the video. No matter what i tried, i cant get the motion blur to work on the character mesh. Anyway here are some tests and more will follow…

The dance-video is very nice and the char is cute!

Couple of days ago i discovered a video by chance. The video was more or less an ad for the upcoming Ozone application. Somewhere in the middle he showed a facial rig were he was using magnet modifiers instead of the usual bone rig for the cheeks. It looked amazing. Well, Blender has something similar with the Cast modifier. And since i used it already all over the place in my rig. Why not using it for the facials as well. I made some tests and really liked it from the start. Not only i get a couple of fps out of it, the best part is no more cheek bone skinning and its very fast to set up too. The whole cast rig is automated to the mouth corners but with tweak options of course.

This is the old rig. It worked. Automated with a lots and lots of drivers. The best frame rate i got in solid mode was about 10fps This is the new rig. As you can see i got rid of half the facial bones, implemented the cast rig instead, got rewarded with volume preservation for free + 25 fps in solid mode, but the best part, i can rig and skin the face in half the time. This is the default motion i get from the cheeks without any tweaks, no corrective shapes. Works in most situations but needs tweaking in some.

There are a couple of other nifty features which i plan to make a video about.

sounds interesting! more infos would be great. a screenshot of the modifierstack?

Looks a bit wild i guess. The muted parts are related to the body rig. I also used cast for the snarling motion around the nose. Both, the cheek and snarl cast’s blend perfectly together. For the upper one i tried get some wrinkling when you squeeze the brows together but that didn’t worked that well. I left it there anyway for later tests. i have tried to animate a char with hooks and Laplacian deform, but that is very slow in the viewport…

so the cast modifier seems a bit faster Interesting, i totally overlooked Laplacian deformers in Blender. First time i heared about it, lol. Looks like an equivilant to Maya’s Cluster, is that about right?