Dude… you forgot to pack the rock textures x3 it’s all purple now. And even so, on my shitty labtop it’s running 4/8 fps…

Damn, I feared that stuff like that would happen. I was sure that auto packing was enabled. Well, gonna update it tomorrow evening.

Dude… you forgot to pack the rock textures x3 it’s all purple now. And even so, on my shitty labtop it’s running 4/8 fps…

post screenshot, I have no such problem. Maybe it is because you have old system.

Oh, so everything was ok. Thanks for the hint. Deleted the Link already, though. Well, gonna reupload it tomorrow because I didn’t save the link (unless someone who already downloaded it reuploads it before I can).

Edit: Put up the file again. It’s slightly modified. Not great but maybe you wanna have a look and tell me if everything works as intended.
http://www.pasteall.org/blend/2496

Hey Sachiel, I have been looking at your scene a little better then I had time to the other day, and I am really impresed with it, Although I am making changes to it, like AO baking it, something I learned how to do resently, it will save a bunch of space instead of realtime lighting, but once I have it better I’ll try to reupload it so that you can see it for yourself. But it looks really good.

Hi. Thanks for the feedback. Coincidentally I’ve been messing around with baked shadows and AO as well. It gives good results especially with the tree shadows on a plain. I think self shadowing or shadows that overlap several meshes are hard to bake, though. Plus, when you have only baked shadows, your character won’t get shadowed when walking into a shadowy area so you’ll have to fake it somehow.
But I’m really looking forward to your test.
I improved the trees a bit recently btw. Gonna upload them soon so be sure to check them out if you’re interested.

Ok, yeah the character shadow is a problem, but if you were to make it first person, like Halo which it does look a lot like a Halo map then you wouldn’t have that problem, also I have noticed your ground texture is very tiled, the best way to fix that is to shrink the uv down to regular size, so that it fits in the grid, then go to the materials panel and change it in the map input to your desired size with size x&y, then add another of the same texture, or maybe a different one and change the size from the other one smaller or larger, smaller looks good, then decrease its col in the map to tab, it makes it look much better.

Ok, I have some good progress on it,I only got about 30 fps on it just a little while ago, now I am getting 60 fps, when I get close to the grass it slows it down alot yet, but I’m going to work on that, I’ve made some big changes to it, such as baked shadows AO maps and made your building really cool looking, I don’t know what it looked like before, because the map wouldn’t load, but now it looks pretty cool I think, I’m not going to upload it yet because I’m not done with it and don’t feel like wasting my time with uploading twice. Here are some screens. 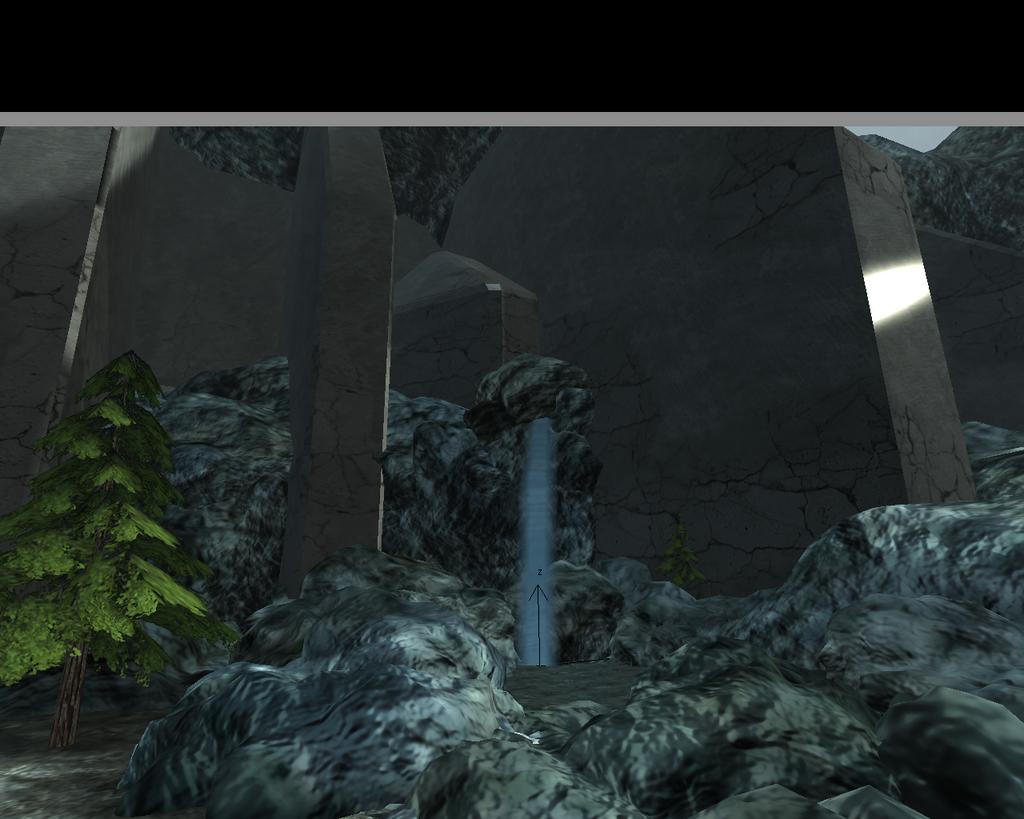 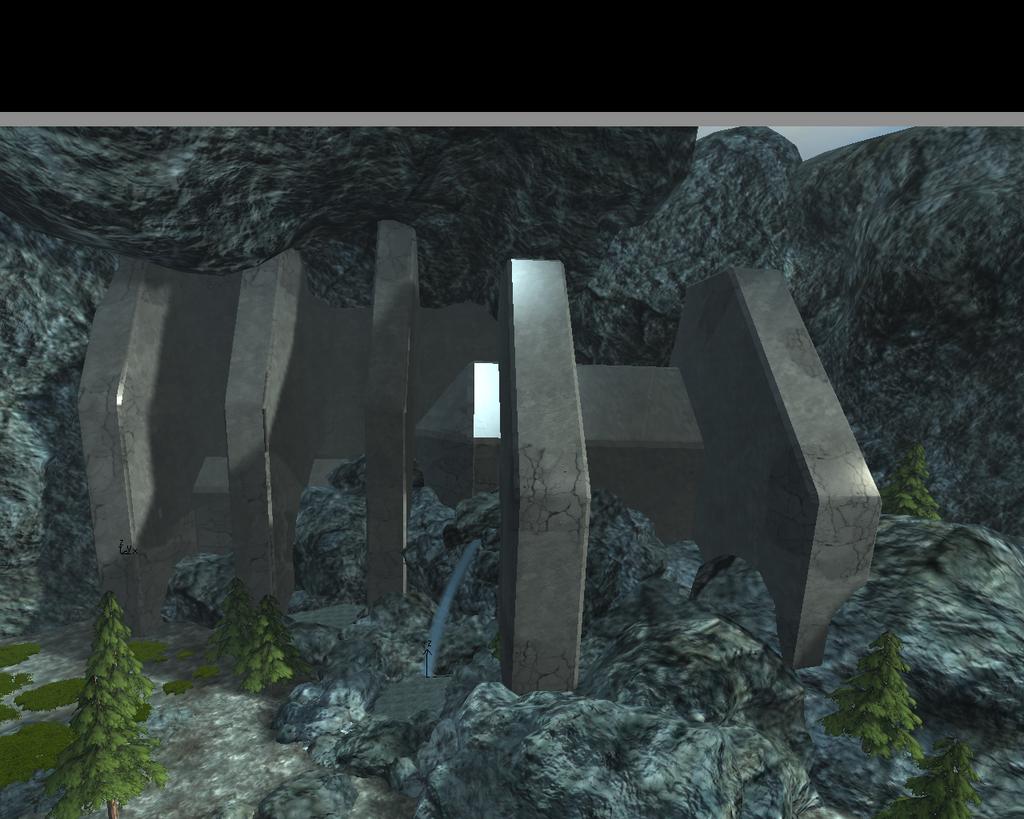 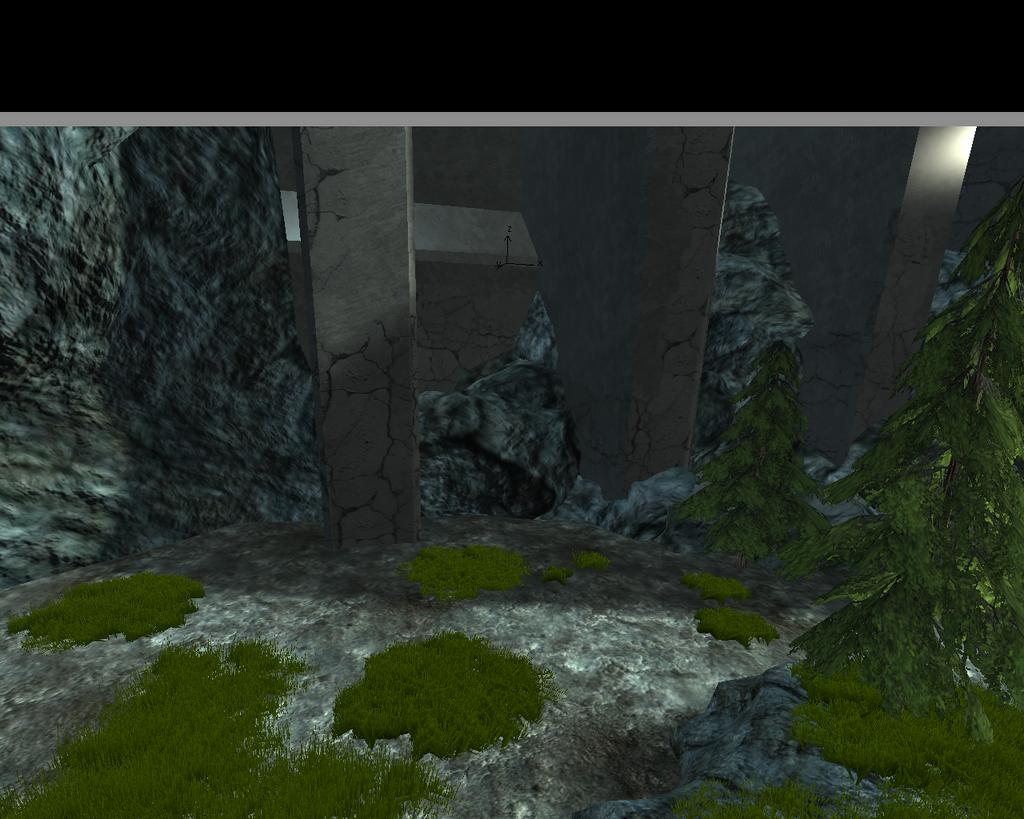 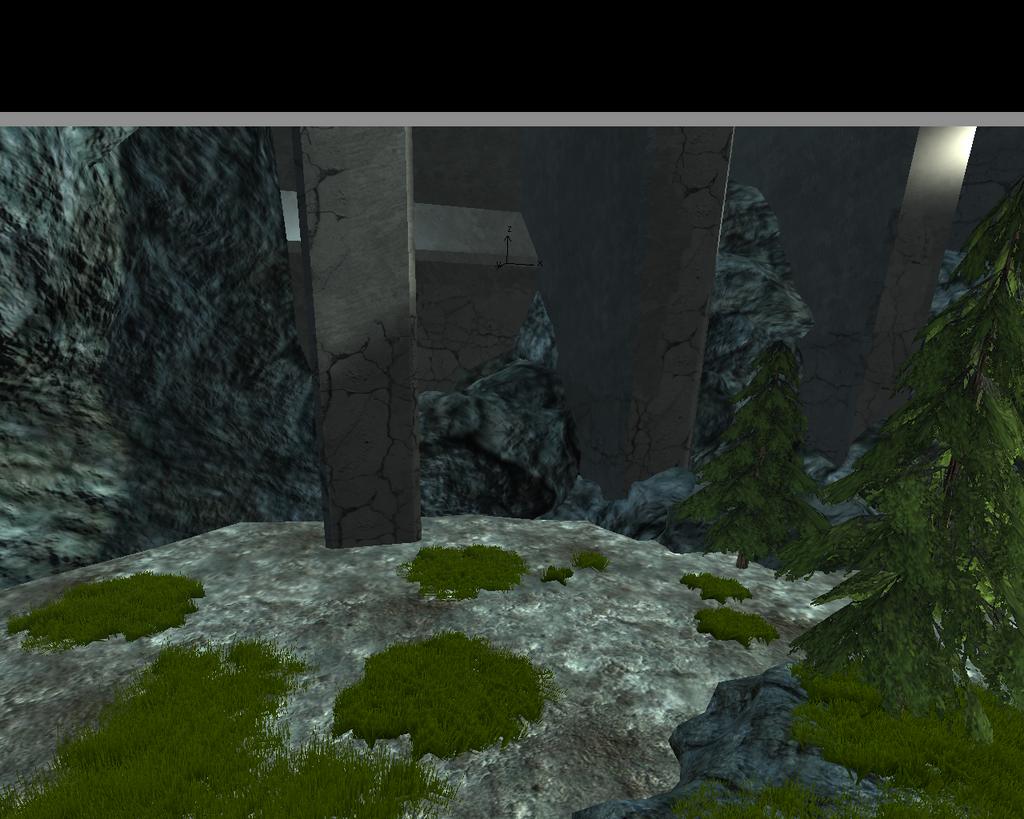 Looks awesome!
Would be good for a Vietnam alike game^^

Looks a little to futuristic for that kinda game, I think it looks more Haloistic

I took a look at your blend, it’s amazing! The water especially; it looks like it’s refracting, even when the game isn’t running. Good stuff…

Thanks, but the water is made by journeman117, it’s not mine. The things completely done by me are only the rocks and the trees. And the waterfall, sort of. The latter being not too good imo. I’ve been playing around with that UV-animation-script from the scripts thread, though, and it gives pretty nice results when using it for a waterfall. Far more versatile than only a rotating cylinder, even though not quite as simple.

Yep, I’ve finally learned how to use stencle maps in a way that I always want them to work. The waterfall I changed slightly. And for all who would like to know, all water you see in blender games pretty much comes from yo frankie, check out their website and go to the download section, there are a bunch of tutorials there and I recomend downloading the game, whenever I am having trouble with logic I look at frankies logic because it helps in so many ways.

Heres an update thats been long overdue, hope you like it Sachiel.
enviro: http://www.pasteall.org/blend/2655
Take a close look at the waterfall in it, just look around and tell me what you think.

Go into camera view in 3d space, then hit P, then WSAD will get you around the map, and moving the mouse will move the camera direction.

Hi, finally had a look at it. I was a bit in a hurry yesterday evening. Looking good by adding shadow and ao maps. Tree shadows would’ve been nice but it’s no problem to bake it again. Downside is that the rock textures became rather blurry now though I can see you put quite some effort into a neat UV alyout. The floor looks good.
The water is a bit freaky here. Too much of a difference between shadowed and non-shadowed parts. Looks strange somehow.
In case you or anyone else is interested, I did a little tree-workover. Used on of Yo Frankie’s barks and improved the trunk slightly: http://www.pasteall.org/blend/2686
Keep up the good work. I’d love to see a more individual scene of yours on day. I wasn’t really happy with mine as it was done rather quickly to provide a little showcase for the assets which it’s all about.

Ok, didn’t realize the rock texture thing, had to change it slightly because of shadow maps and AO maps, not sure what you mean by the water thing, but I’m not taking a look at the file at the moment.
And I think the tree is awesome and I was wondering if I could use it in a game I’m helping somone with, it would be good for a forest tree, if not I understand, there are a lot of people who don’t like to give out their stuff, but I would love to have it.
Thanks, but I really haven’t done much individual landscapes of my own, I’m working on a really big one right now for a game, and its taking me quite a while, but if ever you are interested just checkout
my signiture, don’t have many of its screens up yet, but I will start soon, thanks.
Inferno

Sure, you can use the tree. I’d be honored if you do so. Looking forward to more screenshots from the project. Been following that for a while now.

Thanks, I think the tree would be great for a large forest scene, we’ll put you down as a donater. And I’ll try and get more screens up soon, its at this point were I need to do a few things to get it to work before screens go up. Thanks a lot.