Errors in the Add-Ons window

I noticed a strange change in Blender this morning.
When I open the User Preferences window, and navigate to the Add-ons tab, the panel is completely blank. I then click on the Refresh button and I get this message: 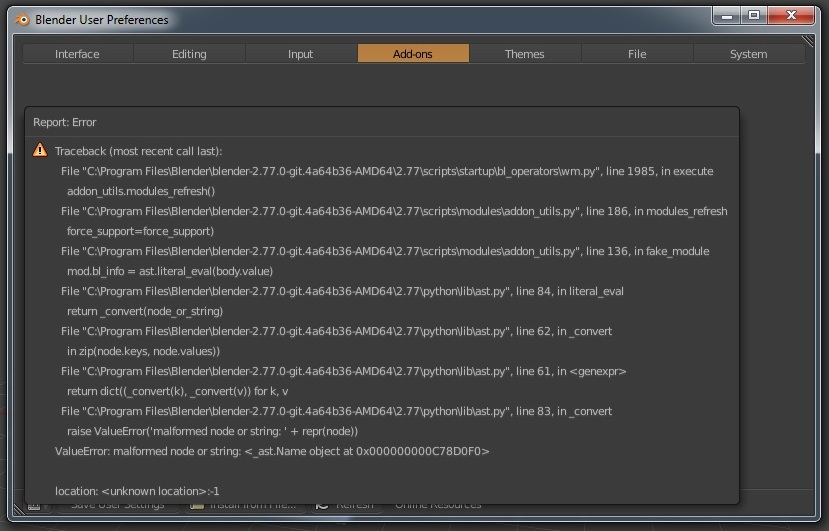 I haven’t edited or changed any of the various files mentioned in the error report.
It’s also true that I don’t use the Add-Ons window very often so I have no idea when this may have originated.
Does anyone have any idea what could have gone wrong and how I would go about fixing it?

Another is, i have one addon script which, interestingly enough, works, however as soon as it is put in \addons folder situation is almost the same as you describe - Addons tab turns into empty space, nothing at all. No error messages, no crashes, nothing. As soon as i remove script from the addons folder Addons tab is being populated again. Haven’t found the reason so far, only thing which is different is extensive use of localised UI in this addon.

Uninstall, download fresh from buildbot, install (unpack? how did you install Blender and from where?) again.

Hey eppo, you weren’t far off the mark with your suggestion of an Add-on file being the culprit. It turns out that an older python file I had developed and tried to install as an addon, had been copied into the addons folder by Blender, and I had named this file disregarding Python naming conventions. I deleted the copy of the file from the addons folder, renamed the file with no capital letters and underscores instead of spaces and all was well! The addons window is back to normal AND the old addon even works as well. You might want to try this with your problematic addon.
Thanks for the reply!

Thanks for the heads-up and glad i was of some help. Did not know of such drastic consequences caused by file naming…
My error seems to be caused by an old, non existent now info:category name, quite an old addon too.