I’ve got this hairball in a glass ball and trying to make him kinda character-like. I’d like him use his hair as appendages to launch himself out of the ball. 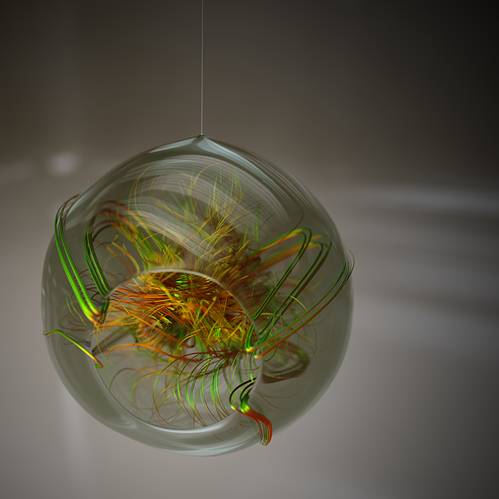 It looks too static at this point. Anyone have any thoughts about how to make it look like he’s just moved his arms out of the ball and is about it use them to leverage his way out of the hole?

Perhaps you could try modeling the hairs into a more recognisable shape such as a hand like object gripping the opening of the sphere, Also make the rest of the “Arm” more human like.

I’m not saying to make it look like a human made out of hair, as that clearly is not the intention for you’re image, but a more recognisable hand and arm structure will really help give the hairball some life.

Also, seen as this hairball is alive, i would suggest giving it a hard centre, that encases it’s vital organs ect. at the moment it kind of looks like grass stuffed into a sphere…

It’s a great concept though, and i look forward to updates on this thread

Research or experiment to find a shape for the strands that makes them look like they are pushing or pulling.

It’s a tough problem, all right. You have, in effect, tentacles. The only references I can think of are squid or octopi, and, since they live underwater, they are effectively weightless. Plus they have that suckers attached to the underside of the tentacle thing going on. Elephant’s trunks, maybe? …