Keyboard shortcuts are shown at the bottom of the 3D View while the add-ons are running, for the full documentation, please visit the add-on’s wiki page

Exact Edit is a set of tools designed to make certain kinds of precision editing (like CAD work) easier with Blender. The zip contains 2 separate tools: Set Measure and Free Rotate. Both tools let you place up to 3 “reference points” that create an “axis” for Blender’s built in transform operators like grab and rotate. These reference points can be added, removed, relocated, and switched out. Each of the tool’s have different functionality after the reference points are placed:

Exact Edit’s Free Rotate tool sets up rotations for Blender’s built in rotate tool. Unlike with the regular Exact Edit, these rotations are not to a specific angle measurement and are instead “free hand” like with Blender’s rotation operator. With 1 reference point you can set a global axis lock at the point’s location for rotations. With 2 reference points the line connecting the points becomes the rotation axis. And with 3 reference points, like with Exact Edit, the face-normal “axis” of the 3 points (as it passes through the 3rd pivot point) becomes the rotation axis.

Some background info: Originally I planned to add these features to Exact Edit Alpha (formerly Exact Offsets), but ran into problems because of design limitations with the way that add-on was implemented. Instead of trying to work around those limitations, I decided to start over with new code and made significant changes to the design. The functionality of Exact Edit is similar to that of Exact Edit Alpha, but there are several important differences to keep in mind:

Thanks for the good addon

Just got redirected here from the other thread. But yeah this is some pretty cool stuff. Combine this one with what is in TinyCad and Mesh Edit 2, and it really takes Blender up another notch for doing technical CAD-like modeling.

Amazing work! covers one of the few flaws of blender.

Just got redirected here from the other thread.

That reminds me, I should probably add a notice to the first post of that thread as well…

But yeah this is some pretty cool stuff. Combine this one with what is in TinyCad and Mesh Edit 2, and it really takes Blender up another notch for doing technical CAD-like modeling.

Glad to hear it. When I do CAD stuff I’ve used those as well along with MeasureIt and NP Tools. I have a few other unreleased add-ons that are part of my “Exact Edit collection” I use as well, but they’re not quite ready for release yet.

nBurn! You just may be my Blender savior. In this thread, I asked about an Absolute Scaling utility like the one in Modo. Does this look like something you’d be able to do? Or are maybe familiar with another addon that does something similar? I know Blender has something along these lines for Object mode, but I’d like one to work while in Edit mode.

Your “Exact Edit collection” might be what I’m waiting for?

nBurn! You just may be my Blender savior. In this thread, I asked about an Absolute Scaling utility like the one in Modo. Does this look like something you’d be able to do?

Ah, sorry, somehow didn’t see this reply until releasing an update. I’m not sure if it’s what you describe (I’m not familiar with Modo), but I just re-added the scaling feature from Exact Offsets / Exact Edit Alpha with an Edit Mode option, there’s a GIF demo in the first post. There will be a full change log will be in the next post. 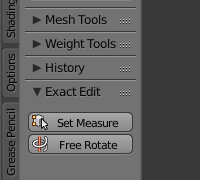 Thanks stephen_ledger and Okavango. The axes and vertices weren’t that bad, most of the work for the 0.1.0 update went into creating the menu system to enable switching between move and scale. 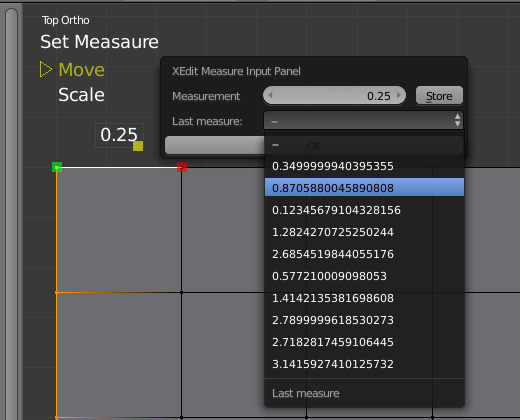 Also, because there was a few people that requested this, Gumroad page.

Please keep in mind this is a beta version. Set Measure has most of the basic features are working, but it doesn’t work (reliably) with some of the newer 2.80 features (e.g.: multi-object editing). Free Rotate is currently disabled (for now) as I had some issues porting it over to 2.80.

This add-on is a godsend. I only wonder - do you have any plans to add support for metric and imperial units? It would be very handy to be able to type N" instead of N*.0254.

Some type of “auto-multiply” option?

No, moreso just the ability to input centimeters, inches, feet, mils, etc. In 2.80.75, the add-on triggers an error message when attempting to input units. So I have to multiply every input by a constant of .0254 to convert from inches to Blender Units.

I don’t know if it’s related or might be useful in tracking down the error, but I noticed that the input prompt seems to lag significantly when typing anything other than a number or decimal. For instance, typing ‘mm’ in rapid succession in an attempt to specify millimeters is impossible. There is a delay on the order of several hundred milliseconds before the prompt will accept the second ‘m’. Maybe that’s useful for debugging?

EDIT: Closer inspection reveals it behaves akin to an out-of-tune denouncing function. Rapid concurrent entries of the same symbol are impossible, but different combinations of numbers and letters work fine. I.E. 12345 works fine, 111.11 or repetitive strokes of the backspace key do not.