falling partly through the floor

I have my game character set to rigid, but whenever I press the play button he always falls half way through the floor. I want his feet to stay on the floor and not go through it.

this is what is happening: 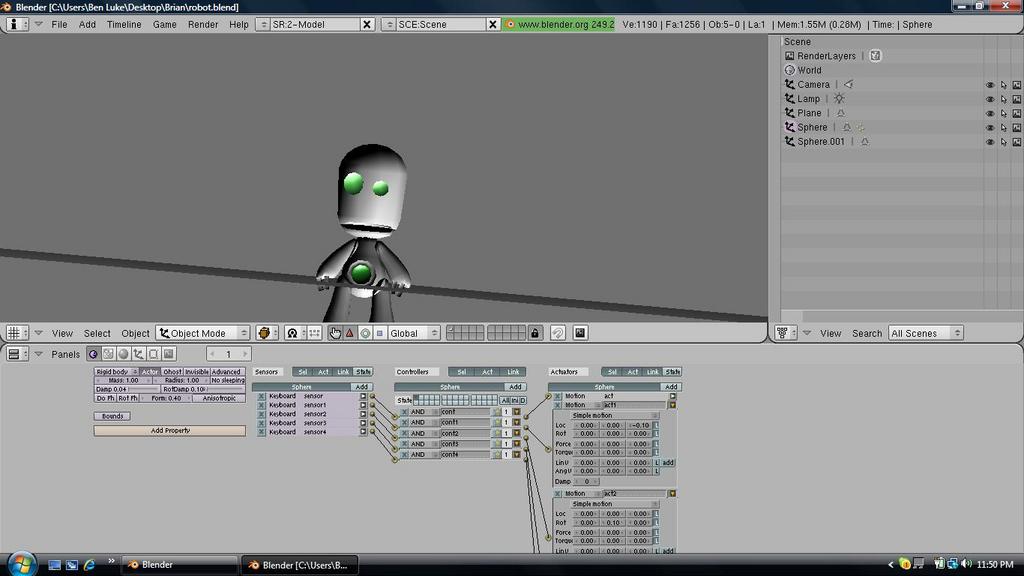 You have to set the bounds for your object

I recommend not using rigid body for characters, as you don’t want them falling over and so on. Also, if your character is armature controlled, I wouldn’t recommend making the armature dynamic- instead, add a box, scaled to surround your character, and make that the parent of the character. This box should be dynamic, and all movement and collisions will be dealt with by it.

Cute character. 11000 polygons for him is a bit much though… you might want to look at ways to reduce that.

Currently, you’re doing a few things that I might suggest you change:

For characters, you usually use “Dynamic” instead of rigid body. Your character will start rolling around if you use rigid body.

I can’t exactly tell which object is the rigid body object, but I’m assuming you’re doing that to your main mesh? If so, I’d suggest creating a box mesh around your character, make it invisible, make it dynamic, and set bounds to “box.” You’ll have to set your main character mesh to “no collision” as well. Using a basic object for your collisions makes them easier to manage.

@Sambassador, Rigid Body seems to work best for me.
To stop rigid bodies from rolling, go to “Advanced” which is by the Rigid Body buttons on your character and click the “Lock X/Y/Z Rotation” buttons.

Again, I agree with the others. Try this:

The reason I use a cylinder is because boxes and collision problems unless coded properly that allow the player to edge him/herself through wall by rotating the cube till it falls through; and a sphere isn’t shaped like any carbon-based beings except for really fat cats (And humans).

I made a cylinder around the character and made it invisible. Then I made the it them both dynamic characters and its working perfectly.