I’ve been working on a sci-fi gun lately. I’m a starter with blender, and this is my first gun. I just tried some stuff out.
Before I start texturing (the colours which the gun now has, are just assigned materials, for the idea) I’d like to have some feedback on this design.
I hope anyone can help me inprove this design.

Similar critique as in this one http://www.blenderartists.org/forum/showthread.php?371117-First-Time-Rendering-with-a-texture&p=2870482&viewfull=1#post2870482

The gun silhouette is not strong enough to identify what type of weapon it is: handgun, assault weapon (held with two hands) or a rifle. The grip and trigger size and position suggest it’s a handgun but the bulky construction could mean it’s a shorter assault weapon. 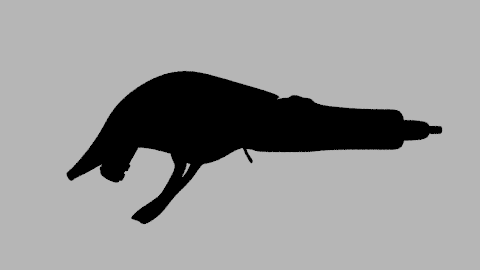 For reference, check if you can identify which type of weapons these are http://img07.deviantart.net/25ec/i/2014/128/5/d/future_gun_concept_silhouettes_2014_by_andyalford-d7hm3b1.jpg
These are assault weapons and you probably see why http://2.bp.blogspot.com/-HTz75_Sj0GI/TxsJhmq6ntI/AAAAAAAAAd0/RkBO5lQcfi0/s1600/vapen%2C%2Bwip1.jpg

I don’t like the design without a trigger guard. Yours, and some of the designs in the first reference lack that. If it has a conventional trigger, the silhouette is stronger with some kind of protection for it. A conventional trigger without the guard would also be quite stupid design because such a simple thing can make the gun safer and easier to holster.

The grip and the trigger also suggest the weapon is for humans or aliens with human-like arms and hands. The way the weapon is held can dictate many design decisions, at least if it’s based on reality like successful designs of any kind usually are.

That doesn’t mean it has to be based on existing/real gun designs, just that the aspects of it make anatomical sense whatever creature uses it. Clear type when us humans see it gives it enough familiarity to be successful: handguns are small and short, assault weapons have heavier structure and more supports, (sniper) rifles are long and there is a scope on top.

Sure it’s fiction and an accuracy weapon might not need a scope, or a pocket gun could be more powerful than larger ones but you wouldn’t assume that. A pocket size rocket launcher would be quite practical thing to have but familiarity is more important in entertainment context when the viewers have to use their own judgement about its function. https://www.youtube.com/watch?v=fTqxFIpc1j4

Thanks for your advice,

I wanted it to be an asult rifle, and I realised that it could just as wel be a hand gun.
When searching on google I saw that most asult rifles have ‘shoulder support’ (or whatever it’s called), in my case this wasn’t a real option since it would then need to go through the roundish cap and that wouldn’t come out nice…
Therefor I did change some other parts to make it more look like an assult rifle.
Have a look and tell me what you think about it.

P.S. I do realise that the handle on the far end of the gun isn’t really ‘pure’. On this, however, I’ll work; it now is just there for the idea. 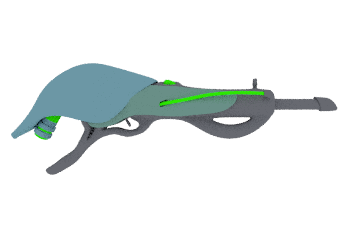 Yea it will pass as an assault weapon if it shows it’s meant to be supported with two hands and is longer than a handgun. The forms themselves could be as organic or rigid as you like, just have to indicate places where it would be held. Could then use proportions to make it look heavy or light thing to hold on to.

Shoulder support makes sense for existing weapons function-wise but I don’t think it’s necessary for a sci-fi weapon. No idea what kind of blaster it is and there are sci-fi weapon designs that don’t have that either.