Recently, I tried to modeling a female character. Once I tried to deal with details on the face, I realized that her face looks a bit like a man’s face.
How can I solve this?
Any expert please helps me. Also if you see any problem, please tell me as well. 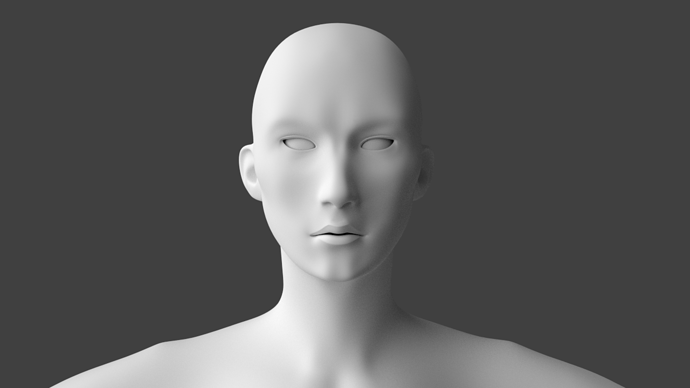 side face (That’s the one confuse me the most): 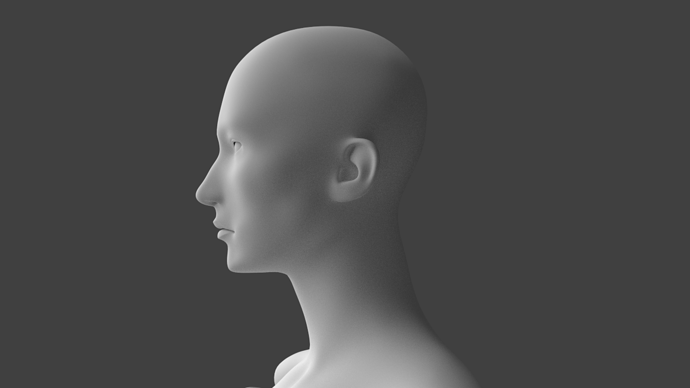 I don’t how will she looks like after applying the textures. Or maybe it will work just fine.
Anyway, pleased to listen to your opinion.
Thank you
Ron

textures cannot help if the sculpt is not solid, so i would suggest to wait with textures until you are satisfied with the sculpt… yes, the sculpt looks male. i would recommend using a referencefoto from a woman you like, and try to match that. it does not need be perfect, but this way you would get automatically all the essential female features corect… to be more specific, the nose looks male, women have usually smaller noses with the tip of nose pointing upwards a little… mouth area needs to come forward quite a bit, lips fuller, chin much more rounded and coming forward too. jawline needs be softer. women tend to have a more fleshy face, so put more flesh on the cheeks. ear shape is very unusual, but then ears come in a great variety… face is a little too flat for women, push the outer corner of eye more backwards… well, enouh for you to do, i hope it helps. best is take a reference foto, and try to match the points i mentioned. … gook luck.

ps front foto does not show up. i gave advise on sideview only.

Thank you so much.
Now I have just get the front face back and I think the front looks just fine.
I’ll do what you suggest and I think it will work.

I understand how u feel when you view your female model. If it is your first time. I happens to me,too. The most recent project, I had my full female model but it looks like unisex appearance,lol. So one of blender artists gave me some of resources for full female model but in your case, u can focus on face. It does help me a lot . I works on bone and muscle loop lines that helps to make model looks femine. So here are sources that maybe could help u…

You should research into topology more. http://1.bp.blogspot.com/-L3iMTvZC8H...ly_regions.jpg
Other good examples for the mouth-nose region:
http://www.thundercloud-studio.com/t...e_lip_topo.jpg

Examples:
https://skitch-img.s3.amazonaws.com/...p27tijidpd.png it’s an unfinished model, but watch how he started looping around the scapula, lower ribs, connection of legs to the torso.
http://previewcf.turbosquid.com/Prev...3f7b5Large.jpg
http://www.elec-intro.com/EX/05-14-11/Muscles-Arm.jpg

hope it helps u… Good luck!

When Hairless. Men and Women share many of the same features. The main difference is in the nose, cheek bones, and the jaw line. Females usually have a narrower, “cuter” nose, if a supermodel type, then higher more pronounced cheek bones. and a narrower more rounded jaw line. where as a “mans” man would have a broad nose, wider instead of higher cheek bones, to match a wider, more angular jaw. And a lot of this depends on the “build” of the character you are making. if your modeling a not-so-muscular/manly man, then the face would be pretty much the same as a female. Same difference as if you were modeling a muscular warrior woman, her features would be a bit closer to a man (especially if she used steroids in her back story).

Lots of stuff to consider, but the moral of the story is. theirs not THAT much difference between a man and a woman. you will probably find that the hair will define the gender as much as any other part of the anatomy. The lips on your character scream woman to me. as well as the eyes. Was she modeled off an Asian reference photo?

The main thing that makes her look male. is the divot down the middle of her chin. try rounding that out and she will look like a whole different person!

edit: also just noticed the indentation on the bridge of her nose. plump that out a bit so its not making a shadow there. Key is to avoid hard lines for a woman, and gently encourage them for a man.

I did quick adjustments in Gimp for the side view. Working with mouse, no reference, only followed the advice doris gave.

https://blenderartists.org/uploads/default/original/4X/f/e/1/fe1a95a1bf6716d0aaed99da5774e0ecd60137a7.png
My editing skills are laughable but I think this is more feminine looking than the starting point.

yes indeed, very good paintover, this is what i was talking about.