This is my second try at a human head. I want to do a portrait of an imaginary character called Ana. She is an assassin for the Empire in a hi-tech world. For now, I have no plans for animations, but nobody knows what the future will bring…

here is a small sketch (i’m not very good at drawing, so this looks somewhat similar, but not exactly like her…)

Right now, it’s just a very, very coarse mesh I’ll refine later on. At this point, I’m mostly concerned about the global proportions: are the eyes / ears / nose / mouth at the right place? Is the shape of the head credible? Is this a viable starting point?

Here are some wireframes and a perspective view:

The ears are still rather flat, I’m conscious of that and will fix it.

Another question: what is it that makes a female head female :-? ? I’ve been asking me that many times before, and I just can’t quite figure it out… For instance, my first head (which got about as far as this one is now

) looked more or less female in orthogonal projection, but seemed distinctly male in perspective projection … If someone could shed light on that mistery for me, I’d be grateful.

Looks Good so far. I’m not very good in terms of being able to Point out Proportional Problems, But I Think the Nose, ears and eyes Looks correctly and Proportionally Well placed. Although There would be more to Crit if you would be Farther, you said it was only the Start, So nothing there yet. But I think the Neck in the way you have it there, Is too small. Also, I think you started the Neck too early in the back, For the Skull Goes more down than you have it, Before the neck starts. Apart from that, Nice start. Looks like a Promising Project =).

I feel the ears are set too high and this make it appear like she’s looking down. In fact, even side on she looks downward a little.

The tops of the ears should be roughly level with her eyebrows. Your sketch is about right for this but not your model.

Overall it has a nice femaleness about it at this stage. Obvious things which add femininity include larger eyes (and often more “open” than male eyes), softer features (chin, cheeks, temples are less angular), smaller, slimmer nose and of course, voluptuous lips (and no shaving stubble!)

Watch the roundness under the chin - it looks too “fat” at the moment though it’s difficult to tell until you add the neck. I think you could pull the nose tip out a fraction further and possibly the eyebrows too. Also, when you model the eye sockets, be sure they are recessed enough into the head.

One problem you may find with a realistic head model is that if it looks okay in orthagonal mode, it will probably look wrong in perspective. I think you might already see that in your model. You might need to stretch the whole face slightly in width.

All in all it’s looking very good and needs just a little tweaking before you get too much detail.

Many thanx for the tips! Sorry I haven’t had much time for blendering lately, and anyway I’m going real slow on this project, so much to try and to learn, so there’s not much change yet. Still, to keep you up to date, here’s two quick views of the current mesh:

AndyD: Thanks for pointing out the ears. They were way too big and too high. And special thanks for the “stretch the face in width” tip! I was fighting with that persp/ortho business alot before. Also, your link is exactly the sort of thing I’m looking for now. If anybody has more of that sort (geometry of the face, proportions, placement rules of thumb, etc.) don’t hesitate to post!

Amazing you pulled this of with so few poly’s.
Makes it ideal for a game.
Anyway, I don’t think the neck starts too high.
It’s good like that, gives you the idea she’s tall.
The earshell could be a bit wider and the ear itself smaller.
And the bottom and top of the ear could use more thickness.
The tip of the nose could be set a little higher.

I think manga models have a clear way of distantiating males from
females.

Did some work the last few days, here are some views:

Sorry vliegtuig, it’s not quite as low-poly any more…

All in all, it seems to me I’m getting closer to what I want, though some kneading will still have to come. The lips seem ok, cheeks are on the way, even the nose starts looking more or less ok. Meanwhile, there’s some detail wrong with the eyes, giving her a sort of a dumb look (which she isn’t, I assure you

). I’m wondering if they aren’t a bit too deep-set. Furthermore, from some angles I can see behind her eyes, and there’s nothing poethic to that at all. I’m not sure how to correct this or if it needs correction at all, but I’m sure some of you out there know the problem.

Don’t mind the eyeballs, they are just out-of-the-box placeholders for now.

That’s about the problems I see (except the ears, which could still use some more vert-pushing), if there are others, don’t hesitate to tell me!!

As always, any c&c welcome!

I think one reason the eyes don’t look quite right is that there is not brow ridge in the skull, it’s a very smooth acent to the top of the head. And since she looks caucasion perhaps an epicandril fold on the top eye lid might help a bit as well. Also there could be a bit more of a dip on the under eye as it transitions into the cheek bone. Looks really nice overall though.

Umm, I don’t like to appear ignorant, but what exactly is an “epicandril fold”? (googled for it, no matches :-? )

btw: started looking at hair. She’s gotta have a pony tail (blond). Now, as I’m quite a newbie at 3d-modelling, I’m opting for something simple, thought of a plain volumetric approach, maybe some alpha-mapping. Other methods I’ve seen (cards, particles) don’t seem to be easily adapted to pony tails. Any tips or hints would be much appreciated.

Not a bad attempt at the ears, but room for improvement. Instead of typing this all out again, I’ll refer you to the post I made for Al_Capone on his model.

I see a slight pole on the bridg of the nose, but it’s not anything that would cause a problem and could easily be cleaned up. Your topology is fairly nice and clean overall. I think the Caruncula is too large. Here’s a referance for you:

I would also recomend reading through this tutorial to help you with modeling your eyes:

If you have to know now it’s been raised, try googling with the spelling above

Got a small update for you folks:

thanks AndyD for the translation… ), and added creases around the lips and eyes.

BrianH:
Thanks alot for the crits, it helped million. Added an antitragus, but was a bit difficult with the verts I have, and cutting new ones would have been a mess.
Your reference pic made me see the proplem of the inner eye-corner: it lacked that Plica Semliunaris thing. After adding that everything suddently made much more sense.

I’m now quite satisfied with her looks. I think I’ll clean up a bit, maybe rework the nose slightly, and then join the two halves to start adding hair and texture. Thanks for all critics, you have all been a great help!

Progressing nicely. I think the bottom lip is too wide and should turn up sooner at the sides to meet with the top lip - alternatively it may be too thick compared to the top lip. This blurry picture might help: 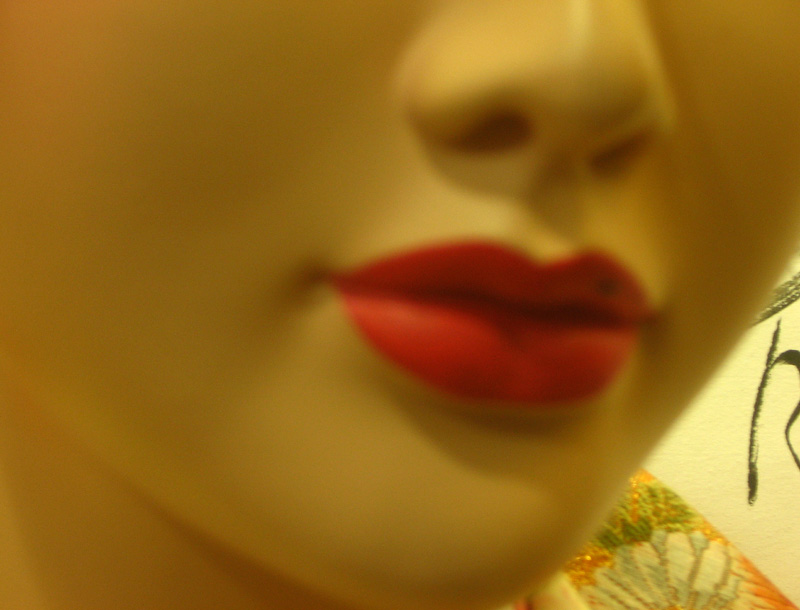 (It looks better irf you zoom it out quite small.)

You may even find that just tucking the corners of the bottom lip under those of the top lip will make quite a difference.

AndyD: I can’t see your image (access denied), but I think I see what you mean and am currently correcting it. While doing that, I’ve noticed that the upper lip has some strange bumps in it :-?

Anyway, I think I was going a bit fast in my last post (about joining the halves and such), it ocurred to me for example that maybe she’d need at least a little bit of shoulders for a portrait…

Did some renders at different angles:
http://homepage.sunrise.ch/mysunrise/mexx/renders3.jpg