this is my try at something resembling a WW1 German armored cruiser of the Scharnhorst class.

I planned for it to be rather low poly so it’s by no means photo realistic and severely lacking detail in some spots. But I like how the scene turned out in general. I hope some of you might enjoy the odd battleship (or cruiser, for the matter at hand), too, and I would appreciate any suggestion for improvement, as I am still very much a beginner. 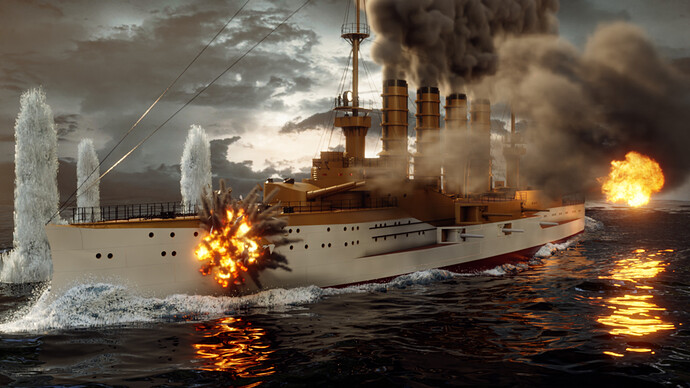 The effects (smoke, fire, water spray) look really great…though it does seem a little odd that the background explosion is rendering in front of the smoke? (Is that a midair explosion? It looks like a big eruption of fire on the horizon, but…?)

Thank you both for your kind words!

@SiriusBizdness You are right, it in deed looks a bit like it renders in front, which should not be - both in terms of realism, and scene setup. It might be that the relatively bright bright muzzle flash simply overpowers the low-density gun smoke (which also gets blown into a upwards direction, so it is even less dense at the lower border). Maybe I should have made the gun smoke thicker.

This is anyway a rather artistic nuisance, that ships in that age were covered in sight obscuring smoke after letting loose only a few salvos. On the other hand, you can make a big smoke cloud on the water and call it a battleship, saving all the time to model it out