This is not only related to the “File Output” node, but it’s the only case where I couldn’t find a nice solution yet.

When I create a “glow” background for something by growing&blurring the alpha mask and the overlay (“Alpha Over”) the original image over it I’ll loose the original alpha mask (no surprise there).

Currently I try to do this by re-applying the alpha mask with either a “Colorramp” (see the simple example node setup in the image below) or via a “Set Alpha” node that uses the background mask for both inputs.
…
Unfortunately the resulting file when saving the composited image with the “File Output” is not really what I want it to be. Compare the top-left image (composition editor) to the top-right image (saved file with black background added in Gimp). 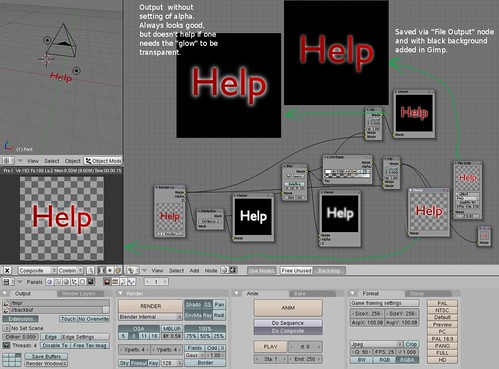 I hope I’ve explained my problem good enough - please ask if anything is unclear.

So my question: Is there a way to do this in a better way?

Cheers and thanks in advance,
Werner

Try a Dilate/Erode node…you might like it better. Gimp is only capable of 8bits per channel color depth so a lot of image information is going to be clipped (lost) in the conversion. Blender is capable of accomplishing most of the things you can do in gimp anyway. Using gimp for serious work isn’t really a good idea (at this point anyway).