fill up a plane with objects using an emitter system

There is a scene were the screen is white and then the screen should fill itself up with an image of a sweet bonbon. (I can’t post the orginal file, because I’m not allowed to) 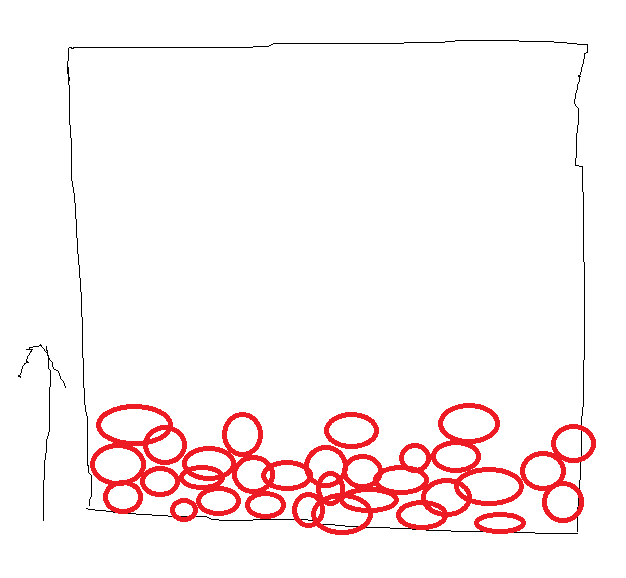 Here’s a simple description made in paint

each circle should represent an image and within ca 200 frames it should cover the whole screen.

My first attempt was to create a plane and set up a particle system “emit”. Then with emit from “faces -> grid”, random 1 resolution 20.

Any idea how to acheive that trough a particle system or somehow else?

I’m a bit confused as to the effect you want.

Either way it shouldn’t be too diffcult to make either with rigid bodies or a partciel system. But just clarify a bit exactly how it should look.

how did you set that up?

I think this will work, I’ll write up a short explanation and pack a blend… It’s kind of hacky how it’s done, but it will work.

First, I’ll state that there probably is an easier and better way to get this effect.

I create a plane, subdivide a few times and deleted all but a single row of verts and edge. There are no faces.
I deleted all the edges (x only edges) I have now 17 verts floating in space in a line.
I added a particle system, 0 gravity, 0 normal, it lasts from frame 1 to frame 50 lifetime 1000
Particle systemj is set to emit from verts, not random
particle system emits from a group of (2) objects a pink bonbon (Eww) and a chocolate bon bon (yum) size in my case .2, random size .3

Now by default the emission fills in these particles in particlar order based on the verts internal index. So I went into front view and swapped a few of the verts order. the first become shte 7th, and the 7th the 1st, changed 3-4.

Next to give random y spacing, I selected a single vert, turned on proptional edit (enabled, not connected) set it to random. Hit G Y and used my scrollwheel to make the radius larger than all the verts, and moved it on y axis a little bit.

I baked the system.

I duplicated the object (the row of verts) moved it up on z axis, in the particle system, where it says ‘particle settings’ I hit the 2 next it to make it single user. Otherwsie changes made to it will affect the first particle system. Free bake.

I changed the start time to 50, end time to 100. I changed the x order of some of the verts to avoid repitition, and did the proportional edit on the y axis.

It’s a pain the *** I hope somebody can give a better method, I really do.

well thank you for the big effort you did. I will try it, should work they way I want it.

(orginally I was supposed to do that in adobe flash, now thats a pain the *** :D)

You can definitely do it it flash. But yeah, pain. This is also pretty easy to do with python.

You could make each row of vert, really 2 or 3 rows to speed things up. But once you start duplicating, the bakes only take 1-2 seconds, so you can add a row in about 30 seconds.

yeah I got the desired result now. Took your 3 vert strings, randomized them on the z-axis and then just duplicated them until they fit the camera. Got 23 of it, so I just had to adjust the start and end.

flash is one of the userunfriendliest programs I’ve ever used

So I decided to do all the 2D videos in blender. (works completly fine with an orthografic camera)

thank you very much. I hope there is another solution around, but this one does it for now

Cool. I used to do a lot with actionscript and flash, it was my first taste of keyframed animation, and it had things I liked, but a lot of stuff that seemed insane.

Is there a way to have a texture control the particle density, and do it that way?

Sounds good, give it a shot.

A way to speed up Photox’s method is by adding the plane, adding the particle system to it and then subdivide it with Fractal turned up to randomize the position of the verts. Then select a row of verts and press P to separate them; do this for the rows you want. Get rid of the plane and then select one of the rows of verts, go to edit mode and select all, then go to Sort Elements in the Mesh menu and select randomize to randomize the vert order. Then just change the start time for each row as Photox said.