Right I’ve finally got round to starting my 2nd short animation, I’m going to be pretty vague on the details for now as I’m still sorting things out but here’s an early speeder concept for the main chase scene.

I was planning on starting a thread once I had a handful of artwork but thought I bet just get something up to get things rolling. This should be my most ambitious project yet and I’m hoping to learn loads in the process and get out of my comfort zone.

Looks like something MIB would have in the weapons lab.

Is that a render which has been doctored with like a “make this into a drawing” filter or something. If its just a drawing then I’m very impressed.

Hey thanks for the comments guys.

@steve - It’s a bit of both really, blocked out some rough shapes in Blender and then did a paint over in photoshop changing the shape, details etc. Haven’t used any filters. Well actually that’s a lie, I used the ‘cutout’ filter on the ground texture…

Just a few quick sketches exploring the form and structure a bit further, don’t think I will spend too long sketching on this as I want to move along with the animation fairly quickly. 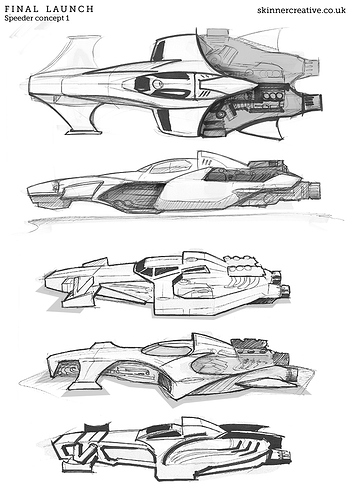 Wow. Forget the 3D modeling, you have some concept-drawing skills!

I agree Great concept art! If I was you, I would join a time and offer some assistance to the people that can’t draw! great work!

Thanks for the nice comments guys on the sketch designs.

@freen - There will be a full animated short at the end of this project, surely I need to design and build something before animating? Didn’t think there would be any point in creating a thread for every element of the animation… This thread will probably include design work for characters and environments as well, though I will be selective with what I post.

Sketch concept is very cool ! I thought that is metal render effect before i click and view it!

@freen - There will be a full animated short at the end of this project, surely I need to design and build something before animating? Didn’t think there would be any point in creating a thread for every element of the animation… This thread will probably include design work for characters and environments as well, though I will be selective with what I post.

http://blenderartists.org/forum/forumdisplay.php?16-Works-in-Progress
is for works in progress.
Sorry to hassle, I’m just a bit saddened by the lack of actual animation in this part of the forum.

saddened by the lack of actual animation in this part of the forum.

Me too. we need to stop making tests, and start showing some real work. But I think we can count on Chris to deliver the goods.

I was planning on starting a thread once I had a handful of artwork but thought I bet just get something up to get things rolling.

I actually agree with Freen. There’s been plenty of times when I’ve posted a new animation in other forums, ANYWHERE, just because this forum hardly ever updates with new animation. No wonder everyone posts Cycles tests animations in Cycles Tests Thread: you get a few hundred hits in a few days on a little test render. Not so much in here. It’s like Plate Techtonics watching animation threads move in the Animation Forum.
In fact, I think this model could benefit in the early stages by doing a quick and dirty animatic of it taking off and cruising by the cam. It doesn’t have to be anything perfect or finished. In fact, it wouldn’t take long to render a 10-pass Cycles animation. It would also give you the beginnings of what sort of environment this thing would live in.
Most of all though, as animatics do, it would give you a sense of how it moves, how light bounces off it, and it would probably bring it to life in movement. This is obviously a creature that moves. So show that. By doing so, I bet you’d start throwing new modelled features onto it after seeing it live for a bit. I see a bit of ducted fan under there, what’s that about? Do those foils have moving control surfaces? Will it have animated lights? Is it a cop speeder or a Moonshine runner? That kind of thing.
Besides, then, and most important of all, you would have every right to tell us to go screw ourselves.

@Denise85 - Not really sure what you are trying to say?..

@Adam - Yes, I am planning on doing a start up sequence animation/animatic for the speeder. So cockpit opening/closing, engine firing up, lights coming on etc. As far as the story goes, it’s going to be very simple as I want this to be a test of my artistic/technical skills, I’m not sure wether to post an outline of the story or just keep it under wraps until the animation is finished.

I’d keep it under wraps, unless you want a record. I enjoy looking back at all the stuff I have done, whether it amounted to anything or not. The best move for your reputation is to work in secret, then release. Maybe building some anticipation along the way. But the best thing for your historical record is to post, and post everything you do good or bad. -just my two cents.

I can understand the trepidation, especially with writing and story. In any art, there’s always a feeling of being naked and putting it out there, especially when something is a work in progress. I think for visual stuff it’s easier, but that’s just a hunch. There’s something about words that gives anyone a queesy feeling when it’s in progress. Visuals are a little easier because the viewer is a little divorced for the artist, and is just dealing with an image, so they can bring it into their own imagination with less fear or connection and work on it in their heads. Words, well, words are very subjective. Almost anything creative with words is like diary writing.
But, as far as visuals, the nice thing about putting it out there while you’re still working on it is that other people can add something to it, often think of things you didn’t, maybe even suggest a direction you hadn’t considered that can be a positive. It can be a good thing, and it can even speed up the creative process. If nothing else, it keeps you from getting blocked, and can even keep the whole thing fresh and exciting. And it can also feel like you’re being pestered about your own art.
I guess there’s drawbacks and positives to anything. I tend to agree with the Disney quote that 3dementia has.

@3dementia & Adam - Cheers guys! Yeah I reckon I’ll keep the story (as simple as it is) to myself and only upload artwork/animations. It’s and idea I’ve had in my head for ages so it’s kind of mapped out which allows me to get on with the fun stuff of creating content.