This could provide a nice complement to the Burning Well texture site. 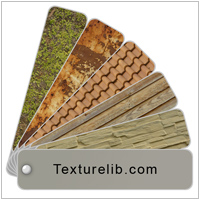 Library of quality high resolution textures. Free for personal and commercial use.

The only restrictions are the amount per-day you can download (goes a bit higher if you register) and the fact you can’t sell either the texture itself or slightly modified versions of them.

Personally I do find it real nice we’re starting to get less restrictive alternatives to CGTextures.

http://zentextures.com/ Another bookmark for you AD

I’m not the one who should get the credit for finding this though, a thread about this site is in the news section of CGTalk, I would consider it quickly becoming a well known texture site.

Interesting site, but why is it every texture site I find wants one to register before downloading textures? If the owner of a website wants to track traffic and downloads of their textures, they could do it without requiring one to register. I would really like to see a creative commons licensed texture repository site without sign ups and everyone is free to download textures as they want…

Anyhow, it’s a good site for sure, but I got to wonder if I register and give my e-mail address to them, will that address end up in a database that is sold resulting in more spam for me?

It looks like you can download 5 textures a day at their smaller resolution without registering, it’s a small number but still can be enough if you stock up on textures you might need in the future.

Awesome site, frankly I don’t like CGTextures I just find too restrictive as Ace Dragon mentioned

and if you register (and it’s free) you can download 20 images a day or maybe it’s 20mb worth of images im not sure but still looks very nice.

and it also looks like they have the option to download a Titled, Normal and specular version of the img’s but it doesn’t look like many pic have that yet. but for those (like me) who know how to use photoshop this looks to be an awesome resource for us blender artists ;D

Free textures & stock photos for use in 3d video game development & computer graphics. Textures are reduced in scale in pop-ups, but will save as full size.

No registration. No daily limit. Free to use in commercial or personal projects. No redistributing, no selling.

There is also http://www.openfootage.net/, which has all stuff licensed CC-BY 2.0

So, you want a totally free, super high rez, texture site with thousands of textures that you can do anything you like with (including reselling), and you don’t want to look at ads either (dude, how lame!). You’d like to be able to clog up the server by mass downloading as many as you want in a day - maybe just a button that says “download entire site”, or maybe separated by categories - hell, a subscribe button that sends every new texture directly to you via email, so you don’t have to bestir yourself and look through the site. Am I fairly accurate here?

I’m not sure why people bother with this site. You have to log in to post, and look at those dumb ads. Everyone should just give us everything for free, because we ARE ALL ENTITLED TO IT.

The bastards who run the “Highly Restrictive” texture sites should, instead of being thanked for running all over the place taking pictures of things so you don’t have to, and only asking a few simple things in return, be lined up and shot. Elitist scum!

But seriously, when the teenagers here actually start needing money rather than just having it handed to them, they will realize that all those silly things like bandwidth, and the time it takes to create the website and content, (constantly updated for YOU) are worth something.

Why don’t you guys start the perfect free texture site instead of whining about restrictions? No motivation? No ability to build a website, take pictures and distribute them? I bet nobody answers that question.

Why don’t you guys start the perfect free texture site instead of whining about restrictions? No motivation? No ability to build a website, take pictures and distribute them? I bet nobody answers that question.

ok so who can code a site, I could handle any graphical stuff if I could get some people from the forum to take some pics we’d be set, hell yeah who wants to do something like this…?
might need an ad or two or perhaps a paypal donation system to cover hosting costs…

cgtextures doesn’t require registeration or have limits if you don’t want to download anything any higher-res then what you see if you’re not signed in.

cgtextures doesn’t require registeration or have limits if you don’t want to downloadanything any higher-res then what you see if you’re not signed in.

lol do you mean like saving the preview…, anyway with a wall or ground texture for example I like to work with high-rez images and make them titled and 1024x and 512x and I think most people do to.

Good luck. I mean it. And take it from someone who’s doing it now - your ad revenue will be meager (until you get a few thousand visitors per day). Most people use adblock plus, so sometimes I’ll have 500 page views in a day, and get 3 clicks. Somedays I get lucky - 1 click paid $1.52 today. Other days I get 10 clicks and make 26 cents. It’s really unpredictable. The other way to go (and I may try this) is to just sell ad space on your site - maybe a 300 px square ad costs $10 per month, paid through paypal. And no one will donate any money to keep your site going on any kind of regular basis. You might get lucky and get some early enthusiasm, but as the months roll by, and you struggle to get found, and your enthusiasm for posting new textures gets lower and lower…well, that’s when you’ve got to remember your mission!

Some advice - make it really easy to post new textures. I am switching to a blog format. I can publish a texture in something like 30 seconds.

Free textures & stock photos for use in 3d video game development & computer graphics. Textures are reduced in scale in pop-ups, but will save as full size.

@3dmedieval: With free I meant free-as-in-freedom, not free-as-in-beer. So paying a sum is no problem as long as the textures have a liberal license like in http://cg.tutsplus.com/tag/premium/

Licensing restrictions are the reason why I do shoot lots of them myself.

Btw: If I ever launch my own site I will share a few textures PD or CC-BY with you

I could code the site

I just coded blendupload from scratch (and it’s feature rich)

trust me, I own a network of blogs (about 50-60 blogs) and I hardly make enough to cover the expenses (hosting, domains, my time, etc) let alone make pocket money.

Web sites are a very unpredictable market, sometimes you’ll strike it lucky and get tons of visitors. Other times you realize after a year that you just wasted all your time.

I’ve actually been giving this a lot of thought. So, you’d prefer to actually pay for a file that you could do anything you like with? A small price perhaps, to get rid of ads? Maybe 50 cents? What would you like to do with textures that you can’t already? Resell them? Redistribute them? I’m not sure that could work…You’d find that all of those textures (the good ones at least) would be quickly scooped up and redistributed. I will freely admit to selling a few public domain images on Turbosquid. When I find good quality, zero copyright (either by negligence or choice) images, I upload them to Turbosquid. I do very well on TS - I make $100 - $250 per month, as opposed to the $20 from ad revenue. I just keep hoping that someday I’ll start making more from ads…

Well, I’d use them for tutorials (redistribute them directly or packed in the Blendfile) and other projects that are licensed CC-BY. When you aim for that degree of freedom, most resources become void…

How much of your TS income comes from your textures? (I’m currently thinking about offering my stuff there).

It’s hard to say. Some months a lot, some less. But I can say this. I sell 99% of my textures for $8. I’m a member of squidguild (people have a whole lot of opinions about that), and I’m at “ruby” level, which means I make 56% royalty.o, every texture I sell earns me $4.48 (less maybe 20% of that in income tax later). My models sell for around $18 - $25 on average ($10.08 - $14 profit), so even selling lots of textures and a few models, I earn more on the models. It’s easier to sell a model for more money, simply put. Especially if it’s unique. I have some that just keep selling, over and over - this low poly book for example.

The key is to have a large collection. I mean BIG. I have 900 + items for sale, and I sell about 1/3 of all items I publish. Some are nice, some are old and not so nice. I have begun weeding the garden, so to speak. I have been at this for 4 years or so, so I have a lot of data. The odds tell me that if I publish 30 items in a month, I’ll sell maybe 10 of them at some point, some a few times. It’s a numbers game. I have made consistently over $100 per month for a few years now. My average is actually over $100 per month for 24 months. Two months ago I made $250 (having sold maybe $475 worth of products). Best month ever. Good luck!

So do you sell more models or textures?

Just wondering, cause I’ve thought numerous times about selling on TS, but it just seems like you’d make next to nothing as they take so much of your earnings