Hey guys. I have been on this one for a bit, slow going. I’m almost where I want to be on it, or maybe I am there. I just wanted to see if anyone had anything to contribute to this before I call it done. It’s important I mention the monk was made in makehuman. I always have trouble deciding when something is done. The last two renders are low samples,btw,final will be more samples. This is not meant to be interpreted literally. What is on the other end of the rope can’t be visualized, as I wanted it to have a metaphorical meaning. thanks for looking. 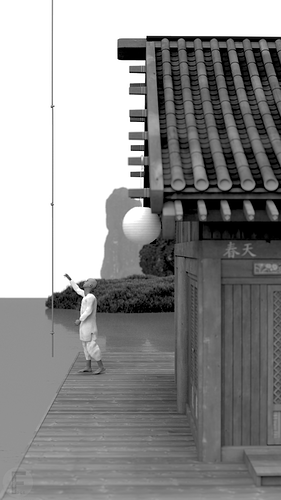 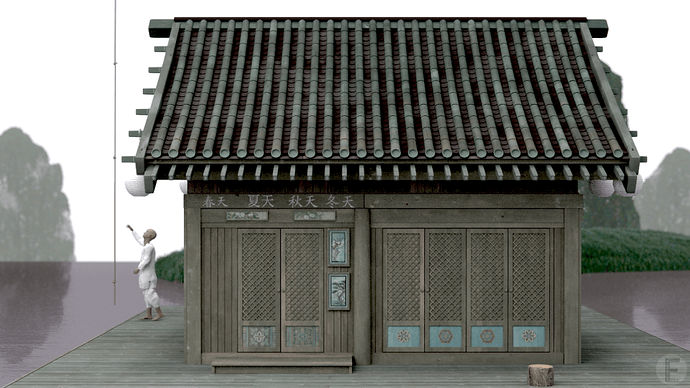 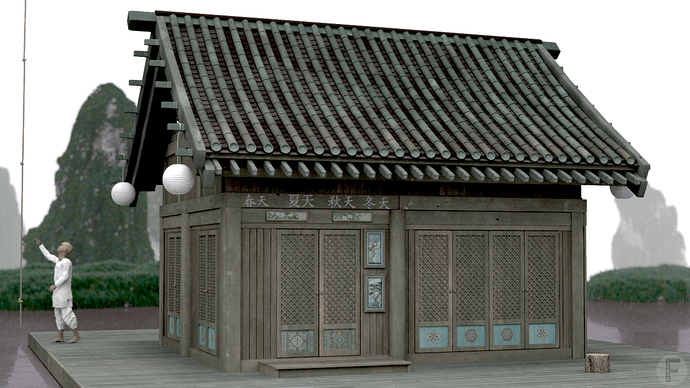 I think there are only 3 problems.

Other smaller issues.
the collision between house and wood is too clean. Add more grime?
There needs to be better lighting, as I can’t tell the time of day, season, or anything else.
compositing would help (if not already)

Hey thanks for the comment. I will make some changes certainly to the platform, you’re right there. It does lack a certain uniformity. The monk has the standard makehuman textures, and I was hoping the distance would help hide my deficiencies in anything organic. I will work at it, though. Regarding the lighting…I suppose I could change it, or try something else, but I liked how it came out here. Just kind of misty and ambiguous. But I will consider other options. Thanks again for your comment.

EDIT: I was thinking, rain would look kind of cool here. thoughts?

I like the idea, and the execution is not bad either. I think the problem here is lightning. It’s kinda flat, grey and boring. I sugest to use a HDR light, that helps a lot. And perhaps lower the ambient light and put there a big, warm directional light of sun on a late afternoon. That would make it moody. You could also use those two lampions - let them shine!

As for the rain, that’s definitely an option, just be careful. It’s not that easy to pull it off and If not done right, it more damage than help.
Anyway, keep it up, this scene has a big potential.

Thank you Larssonklaksson, for the input. Just did a little testing with the light. Added a sky background as well. changed a few minor settings. Updated the platform boards texture, will likely do further. I kind of like some brighter lighting in a way, it has more appeal I guess. Going to keep working on this when I have a few minutes. I will try for a better lighting effect. sorry for the low samples. thanks again people. 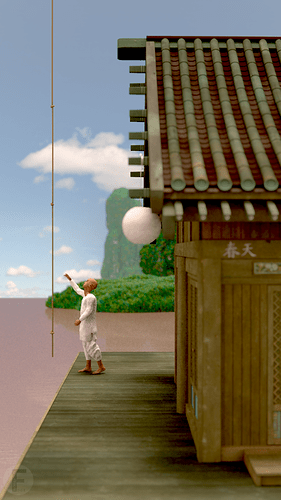 put some more time into the lighting. I’m liking this a little better. Thoughts? 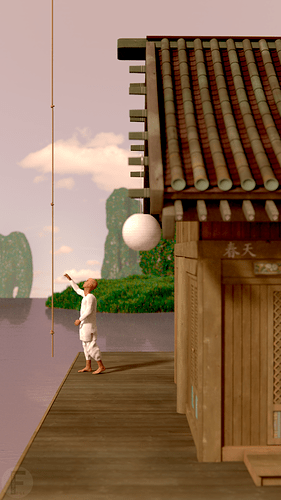 Looks much better! The plants seem a little too saturated though.

Hey, thanks. I am still working things out with lighting and colors.

Still working with the lighting. It’s driving me crazy trying to get a longer shadow from the sun lamp. Every single time I rotate it, I just can’t get a good result. Troubles with the water with this setup. The sun texture in this one, however, ruins the composition as it is due to the lantern. 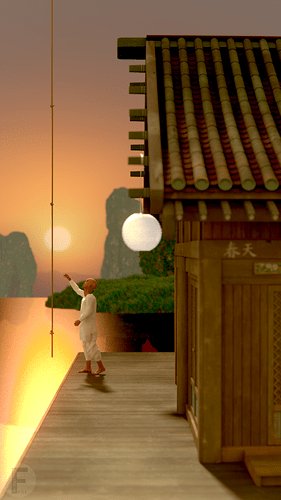 Hi Frobenius, I’m sorry, but imho there is a problem with the composition, now that you are going for a still with this. I don’t really know what to focus, when I look at your image. The main focal point at the moment is the lantern in the foreground. In an animation that could be fixed with some camera movement, but for a still you have only one shot, so to say

I haven’t tested it, but I think that you followed the rule of thirds in this case and that the monk is at the intersection of these lines in the lower left area. Additionally you used DOF to guide the viewer. But I’m not sure if the rule of thirds could be of any help in this case, because the main parts (the monk and the rope) are vertical oriented. And the eye is immediately attracted by the bright spot in the center, wich is the lantern. Also the image is quite unbalanced at the moment. The house on the right side has no antagonist on the left side.

Astonishingly I don’t feel this composition and balance issues that strong when looking at the b/w image in post #1. I think that’s because in #1 the image has some open space to the left, thus leaving some headroom for your character. You changed that in #6 by placing the mountains differently. The b/w house in #1 is also less dominant than the colored version in #9.

This all is only my personal opinion of course. Others may wouldn’t agree. But I would experiment with some slightly different camera angles, based on #1. All imho, as I said

thanks Minoribus. I think you’re right on about this. I will continue to work on this for the next week or so when I have more free time. Will try some other camera angles. I actually loved how the b and w version came out. maybe will revert to it. dont know.

I have normal maps, height maps and specular maps for the default skins of make human. they are to large a file for me to post them on here (they are .PNG’s), but if you want them you can send me a message to my profile with your e-mail address and i’ll send them to you. The normal maps are quite strong so it’s best to set them at a strength between 0.2 and 0.6. perhaps even lower than that