I have worked on this for a few weeks and consider it done so that I can move on to something else. Please tell me what you think of it. Thank you. 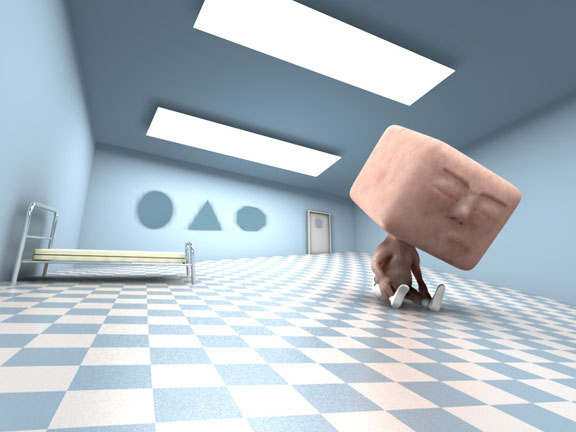 Very well done. The best of it is the idea. The image makes me smile. I am not completely sure, but is the idea that the guy with the square head can not get through the holes on the other side of the room because they have other shapes? Or are these just mirrors or images on the wall?

Thanks for the comment. yeah, you pretty much got the point of it. those shapes are really just telling him how he should be, but he cant be that way.

I like it, it’s got a very nice feeling over it, very good job.

For some constructive criticism: the shapes on the wall are in kind of a poor quality, (it’s nothing major), low-res uv-texture maybe?

Thank you Vivid,
Those shapes were made from extruded bezier curves, but for some reason, they created ugly shadowing around them on the wall. I’m not sure why. I think the radiosity might not be sampling enough in that area.