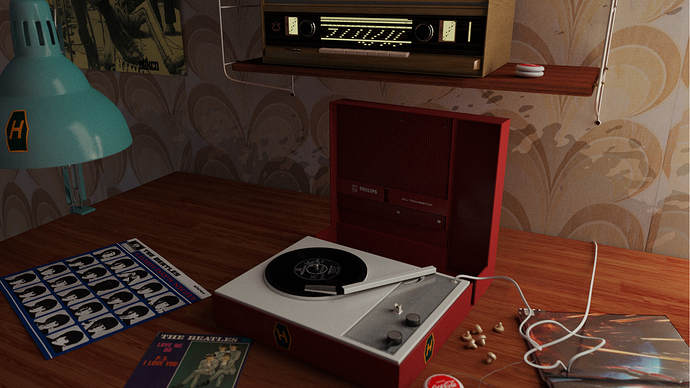 A finished project with things from the 60’s.
critizism welcome!

Plastic yo-yo? I do not remember that there were plastic yo-yo on 60’s. The wallpaper seems to me to be more 70s than 60s. Otherwise it is a good rendering that evokes memories. I had a similar record player as a teenager, it was made of orange plastic.

Tack! Thanks for the criticism! You could be right on the time. I’m not exact, only nostalgic (But the Coke Yoyo dates well back then).
The record player was my sisters. It had a short life. Probably with the intention to bring it inside later, my dad put the record player on the luggage rack mounted on the back bonnet of our VW 1300. Twenty minutes later on the highway a car passed us waving and pointing at the back of our car. We turned our heads just in time to see the record player wirvling in the air and crashing on the road.
I’ve thought of making on aninmation of that…