Have done some works actually so here’s an early blockout for the first ship : 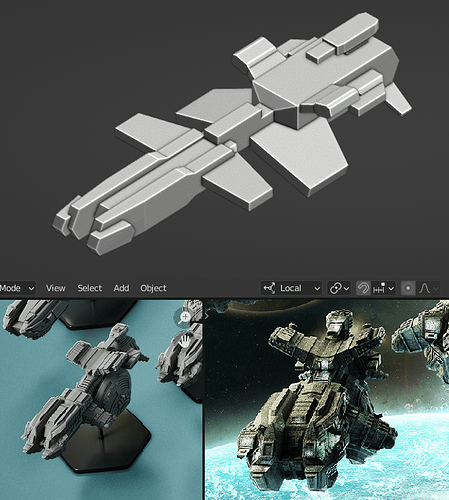 And after some tweaking and improvising : 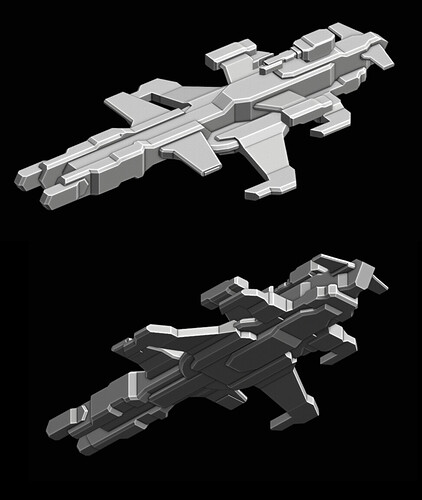 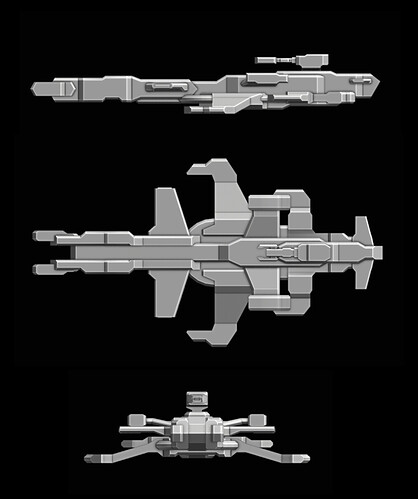 Will move onto the next/second ship now, will be back to detailing once I have around 2 or 3 ships blocked out.

Making this as a tabletop miniature scene sounds priceless! I could see some dice, crumpled snack wrappers and drinks off to the side, LOL

Hahah, I can imagine a food replicator doing heavy job summoning Mars bars, and the title of the game itself is ‘The Fight for Mars’ !

I just had another related idea of making it as scale models so I might not need to model too many supporting elements like maps etc., plus I can include the render from Blender as cover art on the box. Let’s see later.

Upon closer inspection, it appears that ship A, B, and C are using the same shapes for its front and rear section. Initially these were what I’m going to make, but the recent facts made me rethink about it. 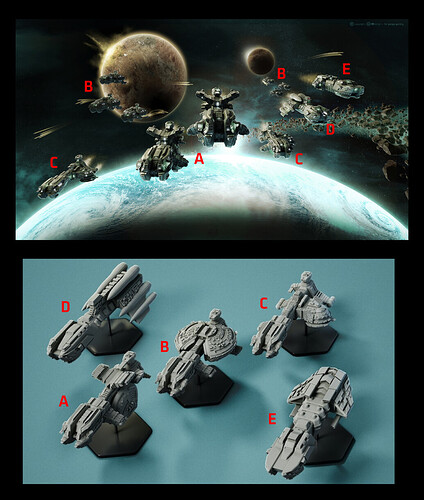 The pros would obsviously be a faster work, with the cons of less variation (models will kind of look the same, compared to if I make ship A, D, E). Of course, this wouldn’t be a problem if I just make all of the ships, but would mean even more works (and thus need more time). For now I’m thinking of making just 3 ships first and the environment, preferably ship A, D, E so I will have more varied models. 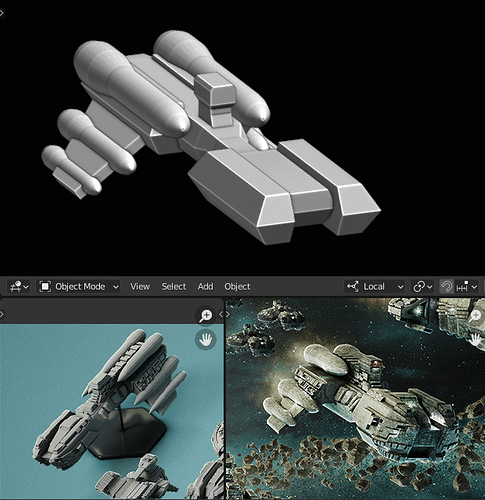 … and after some improvising : 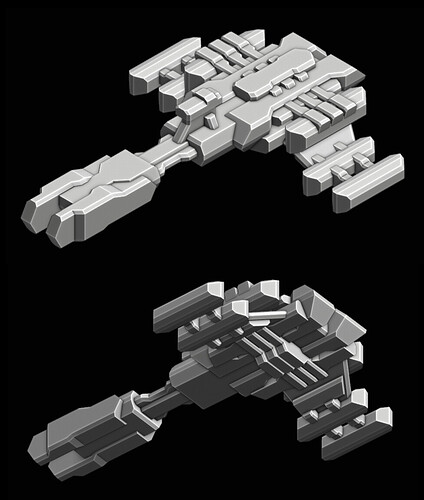 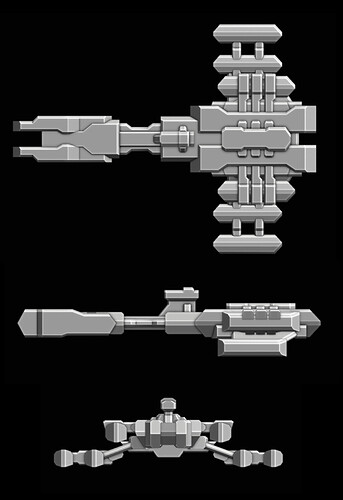 Replaced the cylindrical parts with more blocky ones, still not too satisfied with some shapes though, might revise later.

Btw, I’ve been thinking again for the third ship which was to be ship E previously. This one actually has almost the same overall shape with ship D with the exceptions of the rocket/cylindrical parts, so I might change the third ship with ship C. As previously mentioned, A, B, C has roughly the same front and rear shapes, but ship C has something unique : assymetrical design, and therefore the main reason behind the change. Now that decision has been made, onto the modeling ! 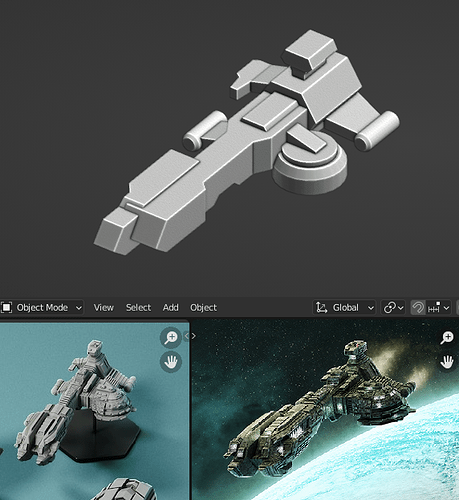 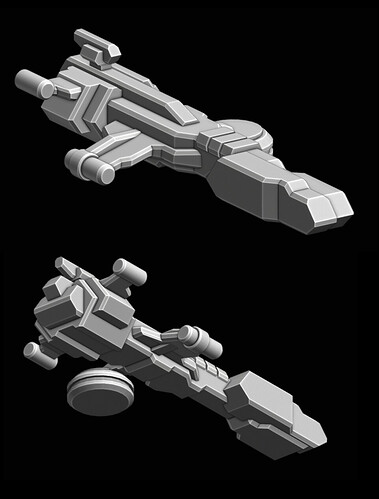 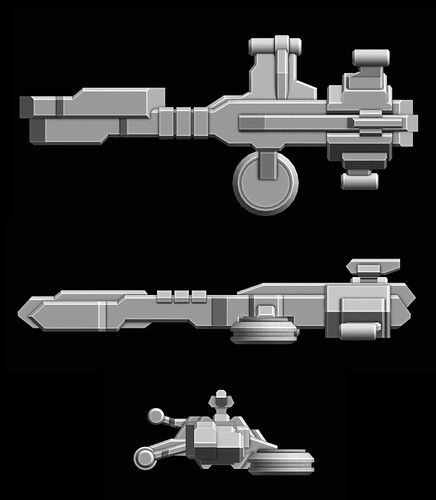 Now that it’s done, time for a family photo : 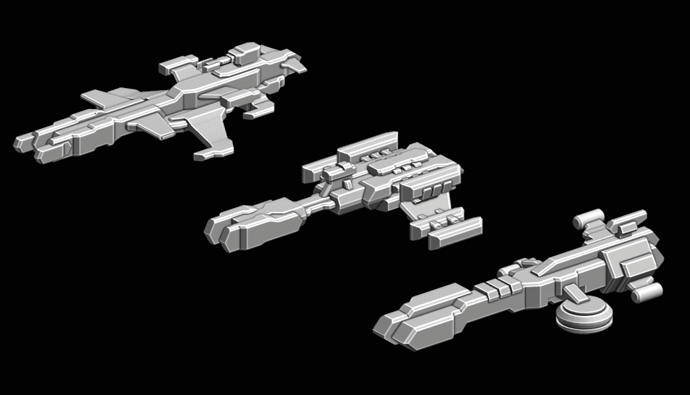 Next for setting up the scene, mainly blocking out to see the global view of things (model detailing will be done after this phase). Space battle scene sounds dynamic and awesome, but might be more demanding as it requires ship duplicates (more polycount) and also FX; making it as tabletop game props, miniature kit or film props set can be easier though will look more static. I think I will try several things for it and see which one will work.

Still undecided for the environment, somehow became a bit unmotivated too, so to keep the spirit up just went with modeling details for the ship along with cleaning geo and UV mapping & unwrapping (I just use low poly here, btw). 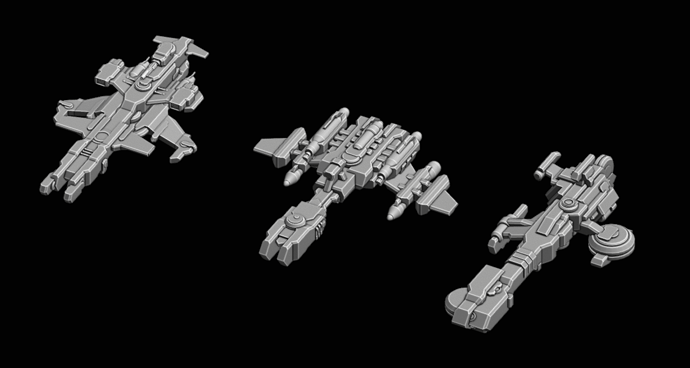 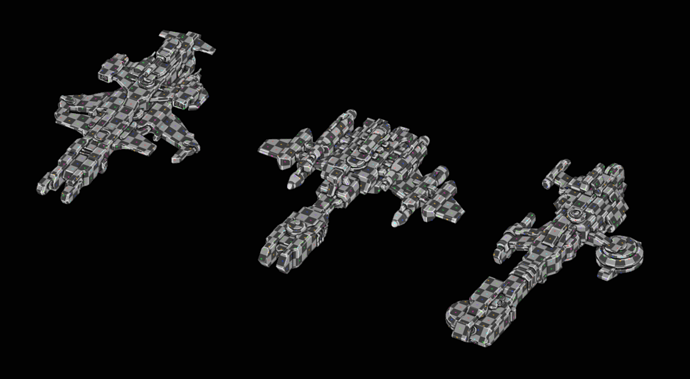 Now in the process of texturing the first ship, might will do upload test to Sketchfab then to see how things going on, especially for the background.

Upload test to Sketchfab with textures for the first ship and a starry background using a huge sphere object : 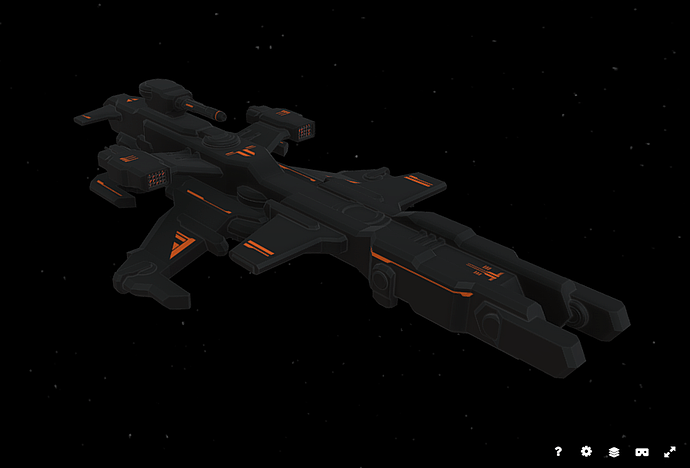 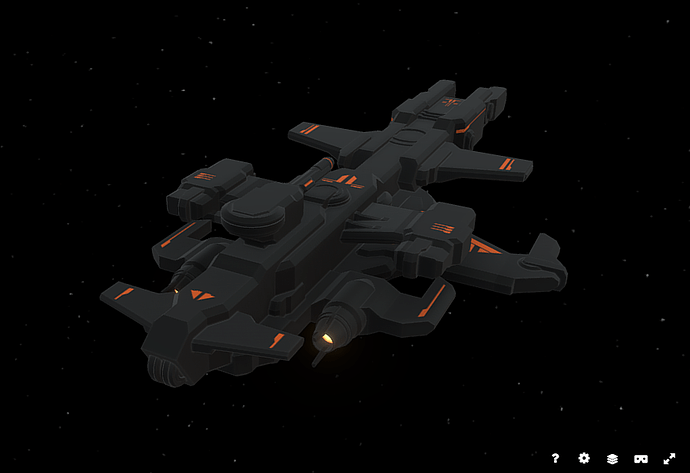 Doing good so far, though it looks rather dull since it’s just a test, will tweak more later. Just learned about setting the background so it looks transparent from the outer side, which was actually backface culling by simply using single sided face rendering, a good trick to know. 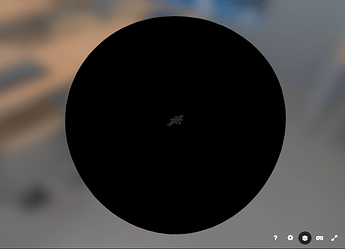 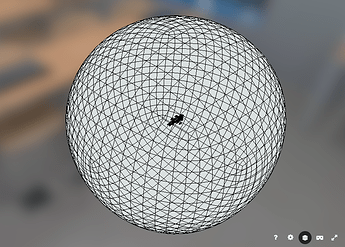 Now onto texturing the rest of the ships and make the background elements for the scene.

Thanks @bartv for the info, that screenshot tool looks handy !

Finished texturing the ships, these are just Eevee render screenshots, btw. Now onto building the scene (finally decided on one, yay), have made some blockouts and more test uploads to Sketchfab, will show them later. 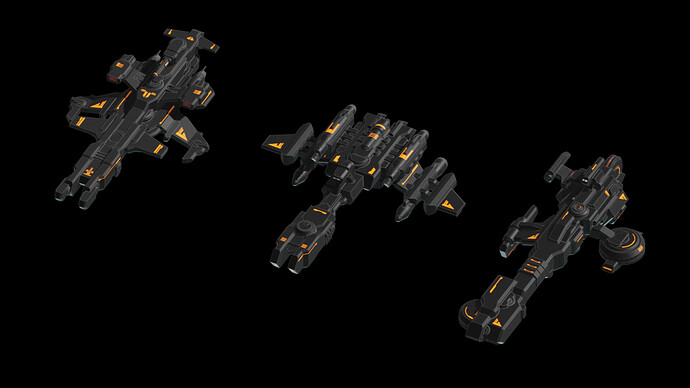 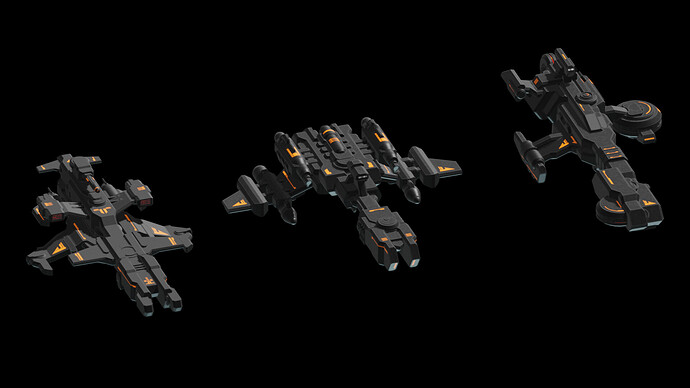 Here’s the concept for the scene, which is in a RTS game setting (think of StarCraft, etc.) 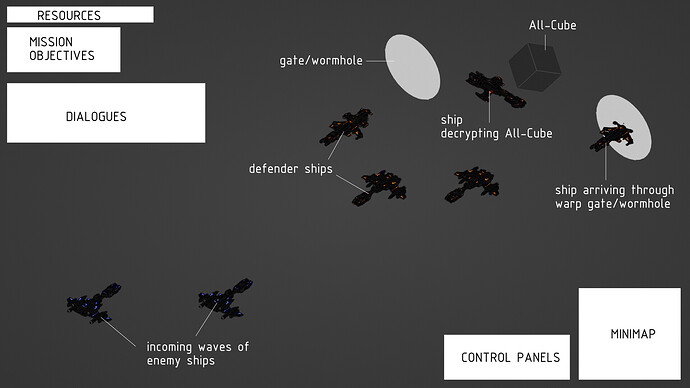 The mission basic is to completely perform an action (decrypting information from the cube object, the All-Cube) at top right while defending the hero ship which performing the action (Megaera) from the enemy. Was thinking about the main ship mining asteroids at first, but didn’t think the ship is suitable for laborous task, then got the idea of featuring the loveable default cube.

I’m using the same models for the enemy ships but with different color stripes on the texture, which of course saves time, but can also shows a fraction within own faction (hey, it rhymes) instead of strife between different races/factions. However, there will be another ship for the enemy which is ‘off-screen’ (not visible to default/current view) but hinted at the dialogues box and mission objective, to save time I just kitbashed elements from currently finished ship models. Here it is : 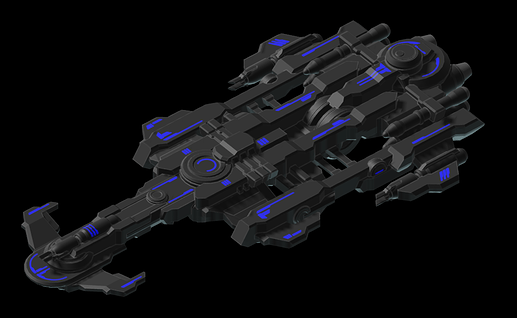 Have done the UI and do some test in Sketchfab, setting camera angle is the key to get the isometric feeling, and will be using the annotation tools to set default/initial ‘in-game’ screen which shows the UI elements from correct angle. A bit tricky, but seems to be achievable so far. The robot photo near the dialogue box is using models from past work, also the cube object but re-textured, and the fonts are using some public domain ones. By the way, it’s currently around 35 MB with 100k+ tris. 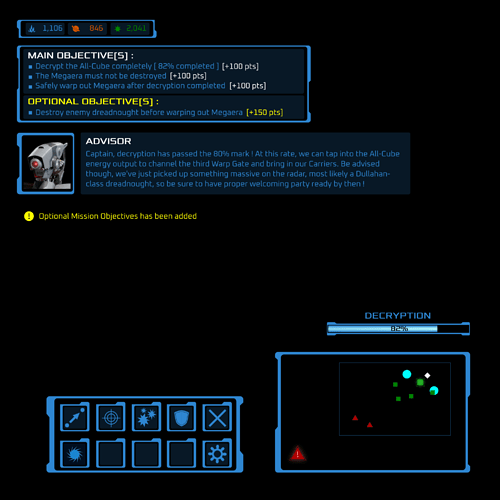 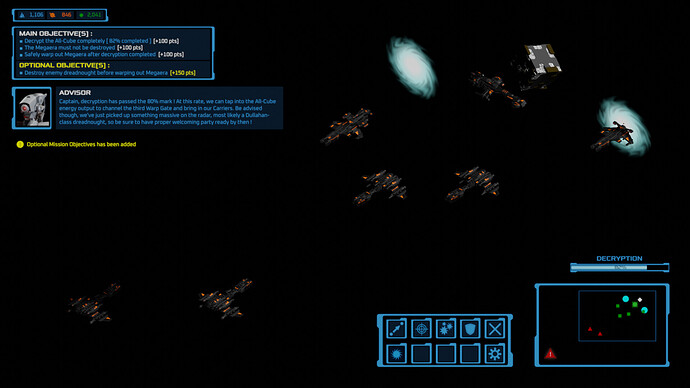 … and test upload in Sketchfab (after a bit of small tweaking) … 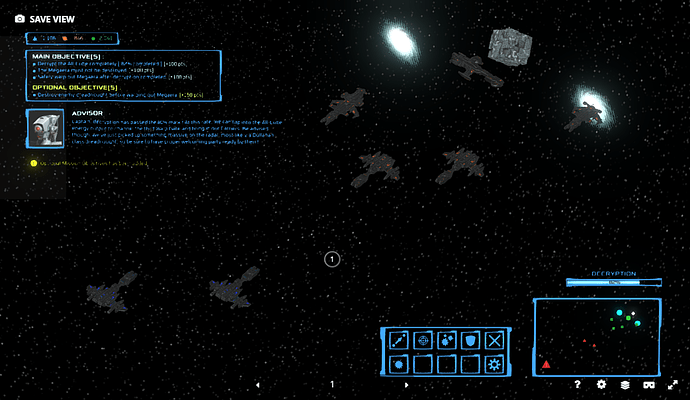 Just took manual screen grab as the Screenshot Tools seems not working on draft uploads. Most work as intended, though there are still some things to take care of next :

Wow! The UI is such a fantastic touch, I want this game to be real now. Make sure to get it on Sketchfab by Thursday, September 15, and tag it #bcon22challenge

Thank you! It should be the official Blender RTS game, hahah. Was about to upload a final vesion to Sketchfab in a few min, hope all goes well.

Honestly, looking at the overall this seems deviated much from the original version, and might be somewhat hard to relate to it due to entirely different setting (an RTS in-game screen vs cinematic render). Might still be tweaking some small things, but not too much.

Nevertheless, it has been a great experience, and got some new knowledge to apply especially for tweaking in Sketchfab environment that I can use later on. It was a blast too seeing the other entries which are top-notch quality and on another higher level compared to this, enjoyed reading their journey and watching the award-winning realtime models. Thanks to Blender Artist, BlenderNation and Sketchfab for hosting this challenge and good luck to the participants !

I really like the style and the effort you put into creating a backstory. That’s the #1 quality I look for in a piece of art.

Thank you ! Really glad to see someone enjoy the (simple) story