Fire animation only renders until smoke hits top of domain

Total Newbie here folks so you’ll have to bare with me over the next few weeks as I muddle through the learning curve.

OK… so I have been building a model of the inside of an old Scottish Highland Inn, complete with stone walls, huge fireplace and huge wood beams… pic attached. This has been my learning model. I’ve only been at Blender for less than a week.

I followed some tutorials on fire and actual made it work for the fireplace and made the fire producer a log instead of a plane. Worked great.

Here’s the problem of the this thread:

I let the timeline scroll through the 200 frames with the camera showing the fire. So far so good. I then render it all as animation in PNGs. (Set to Frame 1-200) So far so good. At around frame 49-50 the smoke hits the top of my Domain cube and the subsequently rendered frames are all the same as that last frame 49 or 50. In other words I get 150 identical PNGs after frame 50 thus obviously making the action stop.

I’ve been through loads of tutorials and can’t find what I’m doing wrong. Help?

I have another Render problem that has just cropped up and is crippling my progress which I’ll post separately. 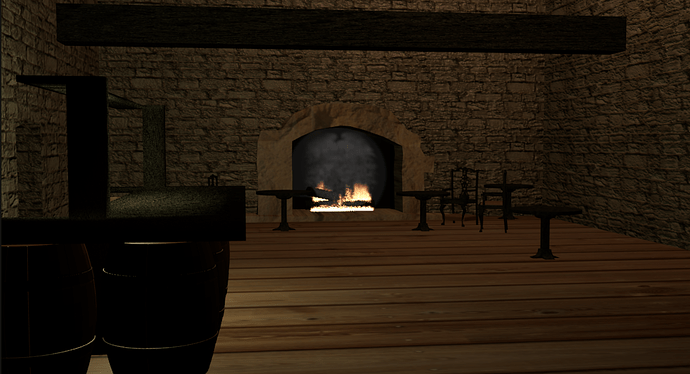 In the Smoke Cache settings are your start and end frames correct.

Just checked and the Smoke Cache was set to end at 250 instead of 200. Theoretically I would guess that that would be OK as its higher than what I needed, but just incase I’m baking and will render again to see. Unfortunately I have another new issue that’s complicating things which is that no matter where I move the selected (CTRL 0) camera, it still seems to render from some old camera position. GRRRR!!! I posted for help on this one separately.

I’ll let you know if setting the Cache lower made a difference. Thanks!