This is my first real attempt at character animation. I’m making this for a kid in the UK to brand his video on school bullying. He said he wanted crazy things like flying pigs and such so my goose-jet is going to smoke a flying pig with his flame throwing abilities and end with baked ham.

What I need to know is if the motion looks ok. It does to me so far. There are some pretty bad deformations of the goose’ neck in parts but I’m going to keep those hid with the camera. The rest I’ll straighten out with shape keys. Does it even remotely resemble a dragon breathing fire?

Thanx in advance for any critique/pointers. XviD codec is in play.

well yes it remotely resembles … but what you need to add is ofcourse body movement… also what bothers me is how it doesn’t seem to be aiming at all… it just bursts the fire out out … upwards and … you know, all over the place.
i would move the head back, and instead of pointing up, pointing straight ahead to the target… and the extend neck forward, while breathing fire…

I’ll work on the aiming but here’s the context:

This is gonna be a dog fight (pig/goose fight). I’m going to have the goose fire a couple of heat seeking missles at the pig but, the pig fires flares out of his butt which foil the goose’s attempt to shoot him down. So the goose speeds up on the pig’s 6 and fires the flame thrower in anger which is why it goes all over the place at first. I was going for a sort of “crack the whip” look. The flames will sustain longer than you saw them in the preview until the pig is roasted. Voila, baked ham. I’ll add in a barrel roll so that the flames can sweep across the pig’s wings, sort of like a side winder missle. The body motion will primarilly be the wings sweeping back as the goose enters a high speed dive to get into flame thrower range, retracting as air speed is reduced, then the roll.

Do the flames still seem wrong knowing the context? If you still think so I’ll change them because you’ve definitely got a whole lot more experience than I do.

Here’s what I would do … to start with, fuhgeddabout the animation!

Take every two-bit (“pick one: ‘1’ or ‘0’”) detail about computer graphics and set them aside. Concentrate, instead, upon your story.

You are attempting one of the most difficult forms of comedy: farce. And furthermore, you are attempting to use it for a very serious purpose (opposing school bullying). If you can succeed in pulling that off, by the design and the presentation of your short film, then the quality of your computer animation will be quite secondary. And, unfortunately, “vice versa.”

So you have … first of all … the absurdity that caused me to mash the “back” button on my browser in the first place: “a fire-breathing goose.” And then … this goose (who is “not cooked, but cooking…”) blasts a pig and turns him into “smoked pork.” (If he turns into a spiral-sliced ham, so much the better. Think “Tex Avery.”)

Whether your CG work is good or merely so-so, what the viewer is going to remember is your very clever and delightful treatment of this absurd, farcical situation. So what you should do first is to block-out the complete film and decide how you’re going to milk that situation for every laugh that it is worth… while conveying the very important and not-the-least-bit-funny point of the entire piece. This will take more time and effort than you may suppose, but once you’ve done it and done it well, the entire outline for the film will present itself to you as just as much of “an obvious, foregone conclusion” as it will seem to be to the final audience. Comedy is very hard, and they never see the blood, sweat, or tears.

I can hardly understand the whole thing myself. I just know that I was told that it was about school bullying but when I emailed the kid to get the title of the flick, he said it’s called “Slashed”. I don’t know how well that’s going to go over. I know I’ve been having fun with it but getting this kid to answer questions is worse than a trip to the dentist: it’s impossibly painful. Well, I assume he’s a kid because he really has a hard time paying attention to anything I’ve asked. If this picture is about school bullying then I’m not so sure that it’s about opposing it. I think it’s more of a horror flick like “Carrie” as you can see from this quote:

I need an animation...

We’re creating an amateur video about a boy who is bullied and his revenge. I like the name
“ImageNation Pictures”
I’d like a blue, dream-like color scheme.

How did you rig the neck? Looks good…

I’m not shore about the two-headedness - it sort of distorts the goose to far - takes it too far from being a goose makes it nearly unrecognisable as one.

Yeah - I think watching some Tex Avery is probably a good idea.

Why are you making this film for (with?) this boy? - sure he may be having a good time but you can’t devote several weeks of your time to a kid who can’t even be bothered to make sence.

I just followed the link in the quote - I think your plan is possably too complicated for a 30 second ident… how about the goose just swoops in and sets fire to the text or something?

I guess I just liked the idea of playing with this. It’s not costing me anything to do it in my free time because I’d be playing with Blender anyway. I have several other ideas that I’m playing with and I’ll just cut together whatever looks the best to me.

The neck has 7 bones, and the head has one in an IK chain. I’m going to have to scrap it because it’s extremely limiting the way I built it around a mesh that’s already deformed. The angle in the video is the only one it can be viewed from without seeing lots of distortion. I have a little bit better idea of how to go about it now. After looking at it several times I have to agree with Basse about it looking fruity. I really like the two heads though.

I just put together the sound for it and it looks like you might be right about it being too much for the time I’ve got because the logo fly-in is ten seconds. I’d probably need a full minute to do everything I want. The music was mixed with a Vietnam helicopter pilot in communication with men on the ground and several jet and missle fly-bys. You can hear the pilot identify purple smoke at the landing zone but I don’t think most people will have a clue as to what they’re hearing. A lot of the audio is clipped because I saved it as 8 bit to make it downloadable. MP3 made it squeal really bad so I didn’t use that format.

Here’s the flying logo with materials and a real sky. I’m getting flat areas in my clouds though where the texture is moving back in z-space via object coordinates. I like the explosion and SoylentGreen’s thin film material but I’m not sure that the two fit together in this sequence. It looks better with ray trasced shadows but for the sake of brevity this render only uses ray tracing for the mirrored glint at the end. I think I need to fade the orange lights as the sky fades too.

I need you guys to help me get this looking good. Please C&C. 5.42MB download: 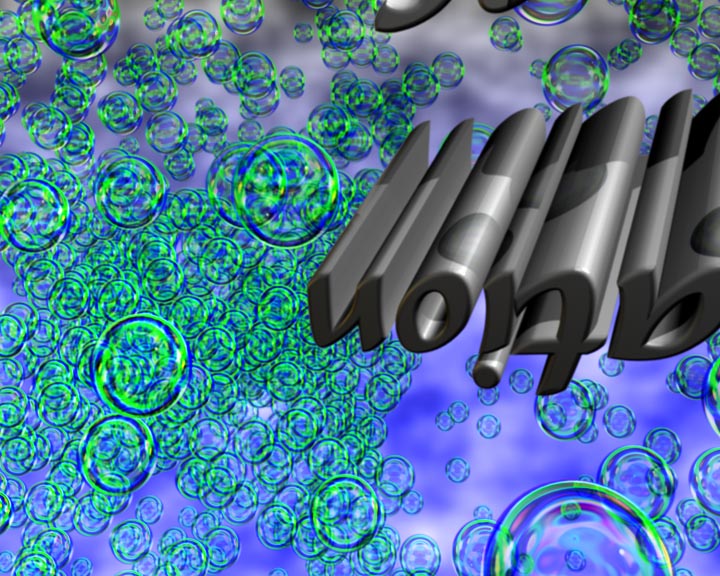