Fire Hydrant by bryantenorio on Sketchfab

I just finished working on this. I baked the normals of a high poly onto the low poly to give the beveled edges. For texturing, I used Substance Painter. 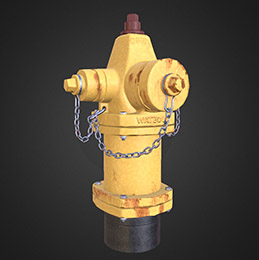 It’s an amazing object! There is a realistic texture with nice normal effect. It’s good to integrate a bit of rust.
The only detail on which you could work are the curves of the chains. For example the chain to the front is going a bit to the left if I’m looking to the fire hydrant form the right front position. But if it’s only a decoration in a game it doesn’t make everything bad (because this is only a small detail)
It’s a good work!

Don’t know what platform you’re developing for, but I’m afraid it might be a little over the top polygon-wise with a 3k poly fire hydrant?
Also depends on whether it’s gonna be a close up object, how many there will be and so on and so forth

And if the rest of the props will have the same amount!

Thanks for the input guys.

Chris at LA, about the chain in the front being turned to the left, that was in my reference. I think it looks cool. If you’re talking more about how the chains are warped a little bit, then I would agree with you. I did them along a curve, and as a result, they warped slightly along that curve.

Proud, I too am a bit concerned about the poly count for the chain. It takes up a full 1,888 polygons. More than half. I made them as low poly as I could without sacrificing the shape. I suppose I could make each chain segment 3 polygons thick, as opposed to 4. It just seems like a bit quality difference visually, and it would only reduce the polycount by 440. I had someone suggest using cards for the chain, but I think that will be too obvious. I intend for this to be in Unity seen from a more First person perspective, so I want it to look good. I also figure that in real life you hardly ever see more than one fire hydrant at a time. So I can only see having 1 fire hydrant on screen, so 3k polygons doesn’t seem that bad. I could be wrong. Thanks again

Perhaps you could make use of LOD, and use this version up close and switch to planes with alpha when it’s far away? Once again, don’t know which platform you’re aiming for, I come from mobile and VR development so resources have always been tight!

That the chain from the middle cap is attaching below the left exit is alright.
Below is a screenshot from the 3d-scene. What I mean is the curvature in the red circle. In my opinion the chain should follow more the green line because the gravity is pulling them down.
But how I wrote in my first comment here: It isn’t a big problem. General it looks great!

I think you’re right in that I should make some LOD versions. As to the platform, I’m actually trying to make an asset pack so that I can hopefully sell and make some extra money. If they don’t sell, then they help my portfolio and skills, so I suppose its win win. I decided to go more for higher poly, because I can envision these being ideally for more realistic things. I need to do some more research on VR, but my understanding is that the technology behind it and the two cameras makes it more taxing on the system. Yet, I figure, that since the trend is to get faster hardware every year, that it wont be long before even mobile devices can support more detailed stuff. Technology should catch up, but if I do them too low poly, then they will quickly become obsolete.

I also figure that more detailed would look better in my portfolio, and creating some LODs should be easier if I start with the higher version. I think I would only need to retopo it, and lay my UVs out in a similar way, and use the same textures. I would probably need to rebake my normal map though. Or maybe since it is farther away, I could get away with keeping edges flat shaded rather than beveled.

It all seems really legit

I also think that you can charge more for your assets if you include LODs!
It’s definately more taxing on the hardware with VR, basically two times as hard since everything has to be rendered twice, and that you strictly have to keep a framerate over 70 FPS to avoid motion sickness. The current mobile version of VR (The Gear VR) can handle a maximum of 50k polys at a time.

Yeah I hate modifying geometry after having done textures too haha!